I've been playing the hell out of Bloodborne. I mean, I've platinumed it & just kept going because...well, because it's fun as hell to play & I keep seeing new things. & because I have to keep getting Dregs for the Vileblood Queen. Oh my first playthrough I had an alright time with the game, but didn't thing much of it. "I miss my shield," could kind of sum it up. On my second playthrough I found the secret areas, including Castle Cainhurst, where I was like "oh, a Wounded Queen motif, isn't that like one of my top archetypes, right alongside Harlequin?" & on top of that she's the equivalent of the arachnid Fair Lady in Dark Souls. I'm a noted Knight Tannhäuser, anyhow, so of course it was a done deal. I became the Last of the Vilebloods, all done up like a Slasher. 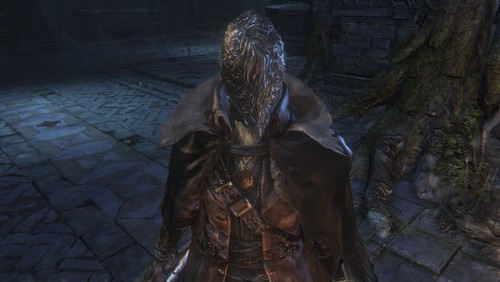 I was digging it but then I tried out the Threaded Cane & thought to myself: "well, that's just dandy. Pun intended." I'd also started getting decent at parrying-- a literal game-changer-- & so was ready to switch my whole weapon set. Of course, being me, I can't play a game like this without interjecting a little roleplaying, so I needed a special impetus. I decided that the death of the Pthumerian Queen, the eponymous Yharnam, would be the tilt of the scales, in which I went with an "all Cainhurst" theme. Fashion Souls reigns supreme, so I left myself a little wiggle room, but my endgame look is much classier. I decided to go to level 150, since that's apparently the "meta" for late NG+ multiplayer, so I'm awfully dangerous.

Here's some more game mechanics analysis. Obviously the Trick Weapons are the game & they are fantastic. Nothing else to say there. Having to teleport back to the Hunter's Dream every time is stupid. The way Bloodgems work is stupid. Dark Souls III almost figured out upgrades. Using tiered upgrade materials, that's a fine system, & then use special gems to add unique properties. None of this "grind dungeons for percentage points" stuff. Don't get me wrong, I want to grind dungeons. Chalice Dungeons are almost there. I suggest a complicated "Boss Souls" system, where a "Boss Soul" can be turned into a ring or rune; a spell, miracle or arcane tool; a special weapon; or a chalice to add that boss to the possible dungeon bosses. Drive folks through some NG+ cycles!

While I'm brainstorming, here's a new Item class for Soulsborne-esque games: the Staff, which blocks like a Shield & casts on the L2. I've got to say, I think that might be a path forward for this style of game: balancing Shields, Guns, Two-Handed, Two Weapons & other options, the same way various Right Hand weapons & spell tools have been balanced. I really like the "class" aspect of these games, & I really like the "generic" aspect of these games; they balance those seemingly at-odds ideas by making you-the-player the steward of it, by getting you invested in a character & a play-style. That's the core of the game's combat mechanics, to me: "every weapon is viable, just pick a moveset you like & build your stats around that," the same way that "anywhere you can see, you can get to" is a thesis statement of the level design.

Guess who was lazy & cocky & lost a dozen Insight to a brainsucker in #Bloodborne? #PS4sharehttps://t.co/J49xlRY4Qe pic.twitter.com/QakcL71jdR