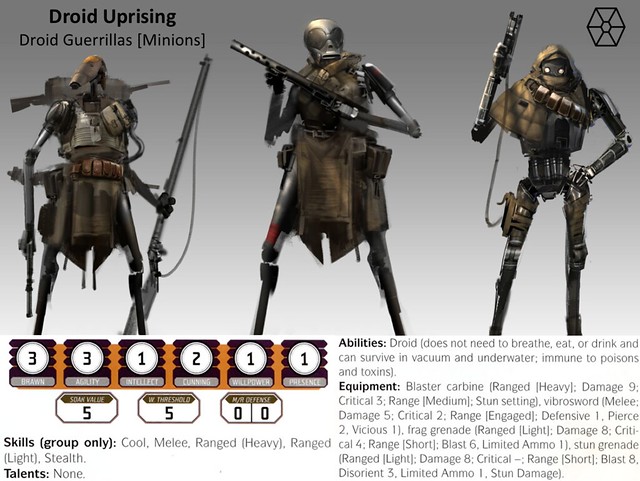 Our Star Wars: End of Empire campaign has split off into two forks; last session was the "Dathomir" arc, but now we return to our planet of origin in the "Ord Mantell" arc.  Raj couldn't make it to the last few sessions, so as the members of the group with the most notable prices on their head, his character Jax Cadderly the blaster totin' charmer & his sidekick the Trandoshan ex-gladiator Sshushath the Zode stayed behind with the clone cadets to keep a low profile while the rest went topside to find a slicer to crack open DD-13/HK's severed head for the secrets of Project: STARKILLER.  Tucked away safely in the darkness of an all-but-abandoned underground Deepdock, the two rogues have been teaching the kids of Harlequin Squad how to play sabacc; Shiny is a natural at reading the table but Cain seems unbeatable…until they catch him cheating.  Bingo is the worst at it; he keeps folding & trying to get Jax to let him try out his jetpack.

& then the cloaked binary beacon that Eris slipped on Jax's wrist back on Corellia Prime starts to blink, transmitting an hyperspace encrypted S-thread meant to lead her back to them.

We cut to the rest of the crew (minus Theynur Kötturinn) returning from their expedition, accompanied by the Metropolis-sleek bounty-hunter droid GEMINI, who is Burke's side character in this storyline.  Jolit, Joey's deadly human replica droid, physically engages the chain-lever to get the cable lift fully operational, which clangs & jangles despite his best efforts at stealth.  Rachel's engineer & ex-Imperial officer, Para Totool, adds some lubrication to the mechanism as they head down the bore hole; the earlier racket has stirred up the irlings that have spun their webs midway down the docking shaft.  Sensitive, insectoid ptero-creatures, the irlings are chittering & buzzing horridly & hungrily as the party descends amidst the silicate strands of their hive, but everyone keeps their composure & Para uses focused lamplight to keep any overly curious bugs away until the carriage is well clear of the nest.

As their descent finishes, some of the nerdier cadets run up to Para from across the bay.  Enth says to her excitedly "did you know that mynocks reproduce by binary fission!  Well they do!"  & now she has two glittering, pedigree, silicate, cable-chewing pet mynocks that have once again escaped from their containment capsule on board the False Profit, the spaceyacht they pilfered from Ord Mantell's crimelord.  99, helpfully, adds "oh & did you know that the Mynock Fancier's Society is the oldest beneficent society in the galaxy?  It is quite exclusive!"

On the plus side,  the little seeker droid they call "Wrench", ID9-WR3-J has seemingly has adopted the alien mynocks, & as Para has learned to sort of…coax them along, like manta-cats, now Wrench can aid any attempt to shepherd them, or awkwardly try himself, even joining their Minion group, as cadet Enth observes them flocking together.  The camaraderie that Para, Jolit & the others have shared with the little parrot droid has made ID9-WR3-J fiercely protective: he gains the Bodyguard talent, as well.  Zero is hanging out nearby disaffectedly.  "I'm just keeping an eye on the eggheads."

The droids are a big hit with the Harlequin cadets, as well; Burke re-introduces Gemini, who the clones take a generally suspicious good cop/bad cop approach to; Jolit meanwhile has full-on admirers, as Skip is fascinated by his armor ("Is that Centurion armor?  Sir, that's some High Republic era antique!  That stuff is almost as tough as Mando armor; fit it with a few cortosis or beskar plates & it would be!  That's what's great about it; highly modifiable, right?") & the more circumspect Clank who simply says, "whatever.  Nice arm."

4-DOX, RA-7 infiltrator, snaps them out of the downtime montage, sending them off to socialize with the movers & shakers of the Uprising.   "Listen, dolls.  So you've cracked open that naughty nurse's databanks & listened to him squeal about this STARKILLER.  So where to next, kiddos?  If you wanna fork it over to someone in the Uprising, it just begs the question of…who?  Now I wasn't built yesterday but things around here have been a-changing.  There's still a buncha, ah "philosophies" & extremes, but these days there are a few droids who seem to have hoarded up the most social capital.  Why don't you talk to them, feel 'em out, see how to handle them, then we can figure out the next hop, skip 'n jump." 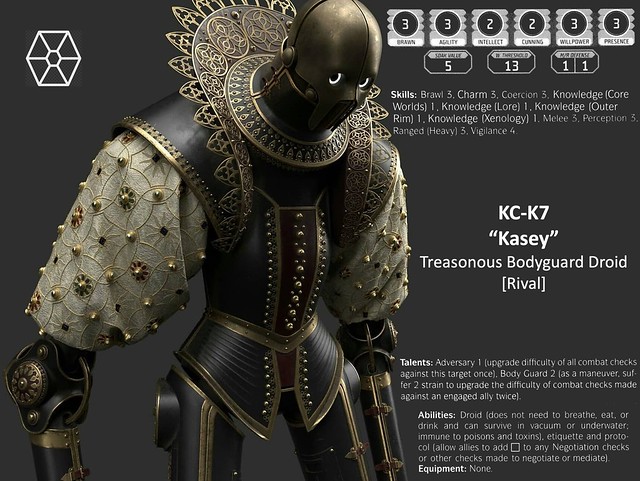 "We wish to gain droid liberation through democratic methods, for instance through senate representation & legislating droid rights in the New Republic, with the ultimate goal of droid emancipation in cooperating systems.  Controversially, I consider us realists; we are willing to accept incremental gains.  We are serious in our demands but wish to be heard peacefully.  Until that is possible, extreme action is warranted, but we should aim at all times for non-violent resolutions.  Of course, if we must act, we must act with a clarity of purpose that recognizes the failed state of diplomacy & that…excessive force may be warranted." 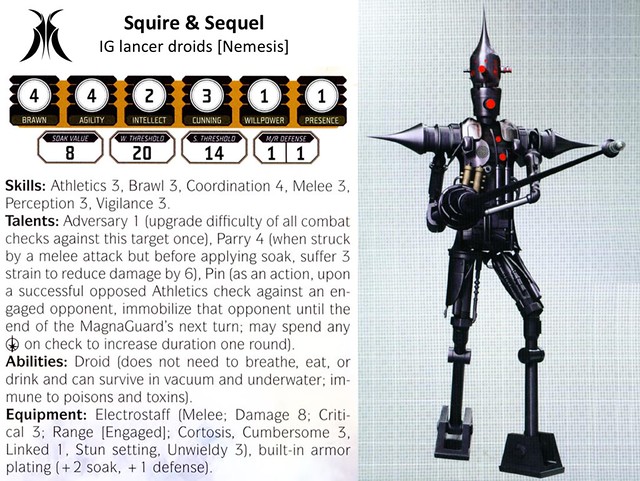 "Illogical to believe that the New Republic will give up the economic benefits of droid servitude, therefore Droid Free Space must be established." 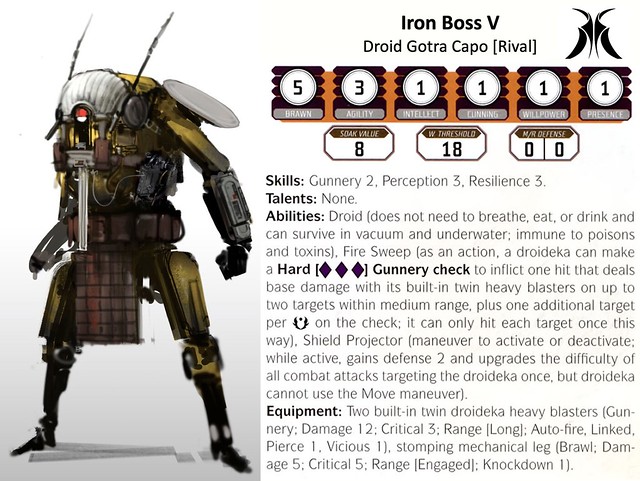 Iron Boss "V": Droid Gotra: this one is easy; these bounty-mechs represent the Droid Gotra, whichever one of them you are talking too.  V is like a congenial anarchist Santa or criminal Onion Knight.

"Ho ho ho, my little friends!  Droids are already free, if they want to act like it.  Busting off those restraining bolts, of course, ha ha!  Criminals don't have to care about LAWS!  Did you know, my fie diddly dee dees, that a little more than 4000 years ago there was a Droid Revolution that almost succeeded?  But does it seem like it did?  No one won the Clone Wars either, least of all the Separistist droids, wouldn't you say?  Far better to flourish in the cracks in this shattered galaxy & disregard the organic's laws entirely, ho ho!"

Framing the scene & there to outro them from rubbing elbows & actuators with the droid bigwigs is 4-DOX, with a bit of a mission.  "Honey I am here to tell you, I just heard the most delicious spot of gossip.  You didn't get it from me, but through the grapevine, there's an…Imperial informant who wants to meet up with an envoy from the Droid Uprising.  Some fancy trooper.  Can I ask you folks to be a pack of darlings & go talk to 'em?  They said they want to meet up at the Caldera Trench during Twilight, & I figured I'd send three of our folks with you just to make sure everything goes hunky-dory."  Which is how they meet the Droid Guerillas, BX-BoopBleep, RX-WhistleChirp & K-XBeepBuzz.  They may have started out as protocol droids, battle or security droids, or anything really, but after a series of militarized hardware upgrades & ruthless software patches, they are now jury-rigged commandos.  They can speak Basic but keep defaulting to Binary.

The Avilatan Caldera used to be a mountain, but a catastrophic explosion during the era of the Old Republic left it a vast, magma-filled crater.  During the Clone Wars, the Republic Navy created the Caldera Trench, turning it into a mega-scale foundry by digging a vast canyon with factories & residencies built into the walls to protect the workers from the planet's intemperate suns.  The lava of the eponymous caldera flows in a single rivulet down the center, a river of fire.  It is empty now, the minerals long stripped, the machinery rusted & picked over, but the phlegethon still burns, surrounded by empty containers, ruined industrial support structures & uselessly gigantic machined ship pieces.  Each wall of the Trench is lined with countless interconnected chambers, offices & apartments but the center canal & its stream of magma are a straight-away, though still with enough industrial detritus & debris to take cover or hide behind. 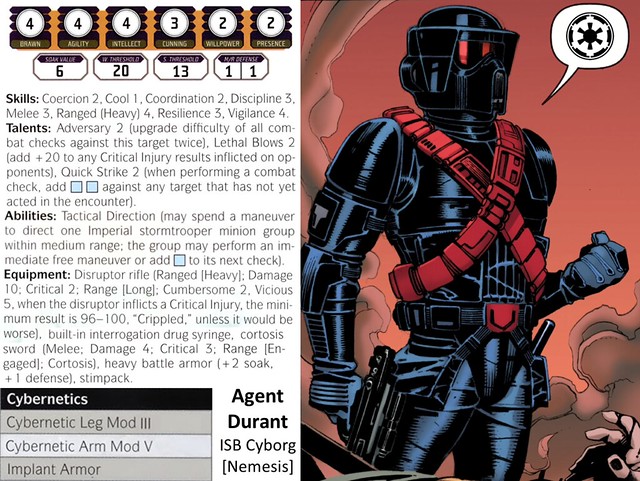 Their contact is waiting in an open space, clad in modified black & red scout trooper armor.  When he speaks, it rings with mechanical reverberation & the dull hiss of static, the voice of an obvious cyborg.  This is Agent Durant, a member of the Bureau of Operations' "Destab" Branch, another Imperial Intelligence splinter group.  The group approaches him with their triumvirate of droid insurgents flanking them closely, asking him if he's alone.  "Not alone.  Snipers.  Sappers.  Support."  There is a mirror flash, & then another, & another, till they spot a few Junktroopers in poncho-capes & mis-matched gear with engineering tools.  The vibe is beat up but custom, veterans who've picked their favourite pieces from a host of battlefields.  A unit of survivors, Imperials cut-off on the Outer Rim who became self-sufficient scavengers, but still loyalists, & of an unknown number.

They take the data crystal offered by Special Agent Durant, but any chances for more in-depth diplomacy are interrupted by the arrival of a group of Gank mercenaries.  Aliens who get their first cybernetic implant at birth, the Gank are pack hunters; this is [Low Snarl] & [Young Gold]'s pride, the latter having spotted the crew leaving the Blue Pyramid.  While the Gank are independent operators, Black Sun is reliable employer with a great deal of marketplace sway.  Why, Concilliator Kek's goodwill alone is almost as valuable as the price on their heads!  The Gank's forms are disguised by armor & helmets, but as a group they have they have a smooth canid motion that extends to their pets: the Ganks all lead Corellian Hounds on electro-chain leashes, but the Alpha, a Corellian Mastiff more than a unit tall at the shoulder, the Gank treat like a peer.  Like the aliens, the animals have been cybernetically modified, with no two exactly alike.  The Gank don't barter or negotiate; they don't even speak.  Communicating silently on wetware comms, they move in to take their prey, including this Imperial interloper… 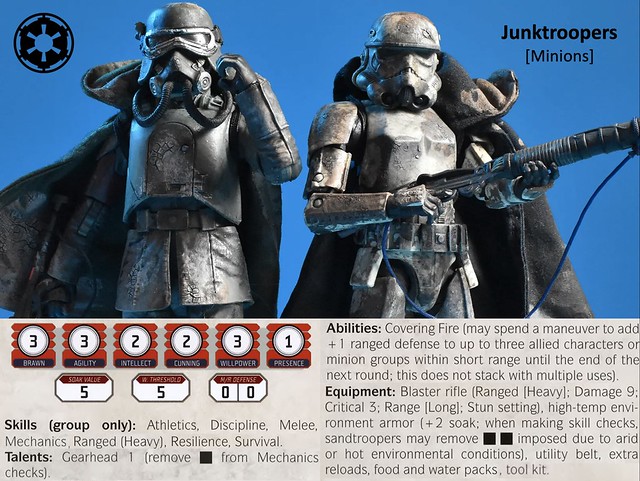