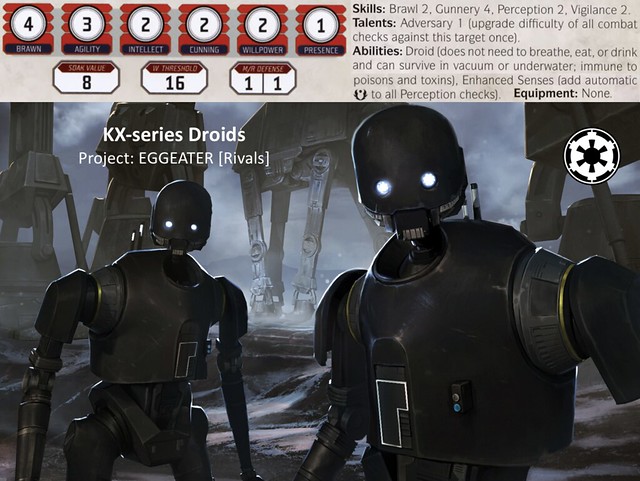 We return to End of Empire after the recent cliffhanger episode with a long shot out of a comet streaking through space with a brilliant trail, a goliath amidst other, small comets in the shower...no, the endless swarm of ice & stone & cold almost-stars. It hurls toward the viewer till it encompasses the screen, focusing in first on miniscule quadrupeds that resolve to be groundshaking AT-ATs, & then the camera crow's eye zooms in on a special forces Inferno Trooper in black & red trooper regalia, with a multi-purpose utility belt & a probe droid attached to the "stormtrooper circle" on the back, leading a squad of KX-series security droids across snowy, rocky slush amidst the stomping warmachines.

As the airlock cycles, we see Lieutenant Para Totool take off her helmet as Ensign Ulma Verbost waits within the interior bulkhead. Inside off the gargantuan comet it is like the organic inverse of Kamino: winding, labyrinthine tunnels filled with faintly biolumenescent unfertilized Verpine eggs. They cling to the walls in rows, like an octopus' egg sacs, or disorganized bio-cloning tubes. This is the Hatchlands, the queen's chamber turned subplanetary cell by the Empire, the lonely palace of a captive Verpine queen denied any company or mates. 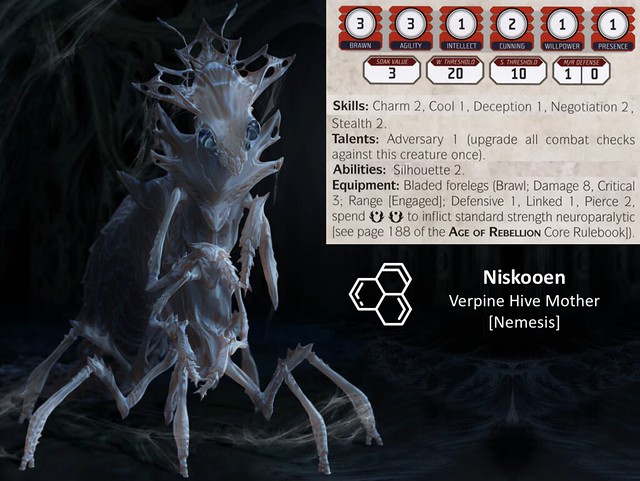 Niskooen, the Verpine Hive Mother of the Shroud Colony scuttles up as Lieutenant Totool comes in, walking & talking. She's sizable— bigger than a Wookiee, smaller than an AT-ST— albino & young. She is obsequious & naïve, confidently asserting that she will follow the wisdom of her Own Mother, the Queen of Roche Hive Mechanical Apparatus Design & Construction, who she unquestioningly assumes will support imperial authority. She's just waiting on Her glorious approval! Para says generic, molifying things to her as she, Ulma & the KX droids march past her warren & into the Special Projects command center, an Imperial science structure with clamshell consoles suspended over a massive Bore Hole down to the planetoid's center. Para, acing her Leadership role, can see that the facility is in full evacuation mode, & she is eager to receive answers, & orders, from Captain Tanda Pry.

"We have received confident proof from ISB that the Roche Hive is engaging in seditious activity, in order to aid the treasonous scum of the Rebellion against the Empire. The Emperor has disbanded the Imperial Senate & we are instating immediate martial law in the Elrood Sector. Part of these emergency powers demand a display of force: Lieutenant Totool, you are hereby ordered to the core to initiate Project: EGGEATER & then evacuate immediately."

Descending to the depths of the comet on mechanical lift, it is revealed that the tunnels are the result of a nest of burrowing exogorths, titanic slug-like silicon lifeforms, now dormant at the core. They chewed this place into the perfect hive for the Verpine before going into hibernation, & with the Verpine monarch being kept under a house arrest that was tantamount to solitary confinment, it made this planetary-chunk a perfect laboratory. Most of serpentine creatures, however, now have some kind of mechanical harness drilled into their "heads." This is Project: EGGEATER...weaponizing space slugs!

Activating the hardware implanted in the exogorths requires an extraordinarily difficult mechanics check, along with a similarly arduous Computers check in order to translate the Arkanian programming macros from fossilized Old Republic era Adascorp databanks, but Lieutenant Totool, her protégé Ensign Verbost & the KX-droids are experts; in many ways this is the culmination of their lives' work. As the space slugs begin to stir, chunks of rock & ice break loose & the tunnels begin to collapse; everyone is making good time & working seamlessly as team, like a machine; they make it to their ships & take off, but the disintegrating Hatchlands has caused a domino effect in the rest of the Shroud, sending meteors wildly out of their standard orbits. A quick escape through the chaotic asteroid field will need calm fingers, & Ulma & the droids in a Lambda-class shuttle lock onto Para in her TIE-Interceptor The Egg-Eater on the way out, a needle she threads like a professional.

We Don't Serve Their Kind Here!

"Para, come on, wake up, we're here." The Scraplands repulsor train on Ord Mantell pulls to a stop outside of The Blue Pyramid, a gambling den in the Scraplands on the edge of a sheer drop down to scavengers picking over rusty trash marshes & garbage heap mountains. A cleft in the land shows that the "pyramid" is just the very top of a sapphire obelisk that extends to the floor of the refuse moors, & below. Jawas in clean blue robes & conical metal hats scurry past, as if they weren't meant to be here. This used to be a neutral bar, with freelancers, ex-Imperials & whomever gambling & drinking & spicing, but it seems since you've been gone it has gone...exclusive.

The Droid Gotra: An underworld organization founded by refugee Seperatists battledroids; they ostensibly believe in "Droids Rights" but in practice take it as a licence for lawbreaking. The one thing they can't abide is deception: whereas some holovids might have clichés about robots who break down into errors when confronted with a paradox, but the Gotra have made a horrifying reality of it: they will put irrational prices on the heads of "liars" while pursuing the vendetta themselves; they are so renown for their over reaction to falsehood that other members of the criminal underworld have started invoking them in oaths & promises...at their peril.

"The Committee" of astromechs acting as pro tem leaderships for the Droid Uprising has broken up over some kind of philosophical issue, & they have shifted their focus from management to fixing up the broken & rusted Lucrehulk ship buried in the geological strata of the junkyard they were networked together in. Para & Jolit have come to the Pyramid during the planet's Purple Twilight, the scintillating Bright Jewel Nebula tame & occluded only by Ord Mantells at least fifteen moons. They need to get their contact, a cyborg Quarren infochant, to slice into the droid's head & crack open whatever files they can find on STARKILLER; Jax Cadderly, Sshushath the Zode & 4-DOX, being officially the "Most Wanted" of the group, stayed behind with the clone cadets.

The door to the Blue Pyramid is blocked by a Droid Gotra capo, a heavy loadlifter rebuilds with built-in blasters & shieldingwith built-in blasters & shielding & reprogrammed for a life of crime named Iron Boss X. "You can come in," it says, jerking a servo-thumb at Jolit, "but we don't serve their kind here!" it says with a mechano-digit accusingly pointed at Para. The two of them try to talk her way in, but between some hefty penalties for being perceived as an organic & a cyborg, as Jolit's status as a synthetic is obscured by him being a Human Replica Droid with apparently cybernetic enhancements. But! Luckily one of the robotic nogoodniks in the bar recognize them as allies of the Droid Upriding, & vouches for them.

GEMINI: a droid bounty hunter in the style of Maria from Metropolis, or McQuarrie's original Threepio look in chrome. She has big Zorii Bliss vibes; that is, she immediately clicks with the group's chemistry, not just because Burke is player her as a side character but also because the fact that she's willing to vouch for the other protagonists says something about where her loyalties lie: with the ideals of the Uprising, not necessarily with the Gotra gangbots appropriating the Movement for their own purposes...but more than willing to take their credits. 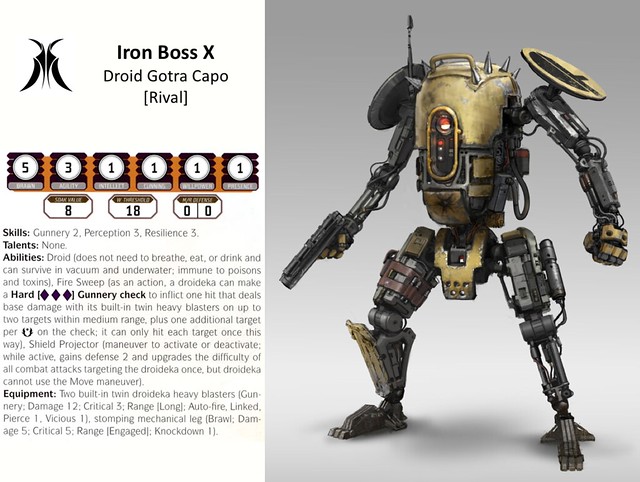 The Blue Pyramid's owner & bartender is Mu, a brain in a spider-legged droid body, one of the B'omarr monks with a religious obsession for chaos & fate, entropy & luck, who created this casino as a kind of temple, where every sabbac hand, each of game of cubikahd & any roll of the chance cubes is a sacrament. A variety of droid guerillas with hunter-seeker patches, stolen weapons & new "freenames" in Binary sit enjoying lightly scrambled data (BX-BoopBleep, RX-WhistleChirp & K-XBeepBuzz) as well as a pair of astromechs that seem to be arguing over something, judging by their toots & beeps (R2-K0, "Tycho" & R2-MA, "May").

Valdo Vance is the infochant they are looking for. A Quarren Cyborg, Valdo has made a name for himself by selling junk code & cracked progams to droids looking to get the equivalent of inebriated, but his real skills are in slicing & code-breaking. The tentacles of his face are long & smooth, dappled with rings, & his tusks are gold. Behind his mantle, a cluster of glowing, many-hued optical cables extend from the back of his head like a mane.

He has technically been a member of the Droid Gotra for quite some time, but never expected that to actually matter, out here in Black Sun territory. He gurgles: "bloop, here's the deal. The fourth lobe of my brain is partitioned, firewalled off from the rest of me. Your data dumps there, & you get your decrypted results along with the proof of a partial memory wipe. Burble. But I am always willing to cut a deal for...de-anonymized results." The elect for privacy, hand over the credits & the severed head of DD-13/HK, with GEMINI listening in because, why the heck not?

"Our work has been ongoing, for we seek nothing less than perfection. I was present during the modifications to Grievous, & I assisted during the inorganic upgrades of Vader; I was a co-developer of the clone's inhibitor chips & we have carried on the research towards successfully cloning...high M-count individuals."

"The being you encountered...was not the outcome of Project: STARKILLER. But there is a dark purpose &...not an intellect but an...instinct, behind it, sewing themself together with the Holy Dark Side."

"In hindsight, the solution to overcoming the subject's rejection of the sample's blood & subsequent mutagenic decay was...deceptively simple: to fill the biogenic gaps by mirroring the baseline, the so-called Omega Patterning...chk-chk-chk, which, of course, had the obvious side effect of altering the sex of the test subject.:

"My Master was nothing if not thorough. Wheels within wheels, win-win scenarios, smoke & mirrors; backups & redundancies. The viable female we produced was incubated to adulthood, put in productive stasis & taken to a...secondary facility, chk-chk-chk, while the great work continued."

"I'm afraid the...exact location is...above my paygrade, chk-chk-chk! & beside the point. Academic. We sent her carbonite encased form off on my Master's command ship, the Insidious, which was subsequently...hijacked, & lost."

The medscan data isn't a full breakdown of the genome, being a severed head, but the flags & metadata are all intact. It looks like STARKILLER was an attempt— no, multiple attempts to integrate exceptional traits with...ex-Emperor Palpatine's original bloodline. Strand-casts larger than human baseline, with increased intellect, senses, vitality...a host of carefully cultivated mutations that just don't work together in a single subject, they can't, inevitably leading to germline decay & fatal metastasis...except in this one subject. A girl in carbonite.

[Young Gold], one of the younger Ganks hanging around the gambling den— canid aliens who are obligate cyborgs— wears a proudly polished golden protocol droid arm, & armor that otherwise seems wrapped in neon-tubing, with an oblong cyclopean helmet with wolf ears pointing out. As the party leaves, the camera lingers on him, & the audience hears him making suspicious static & snarls over his internal comms...an informant! 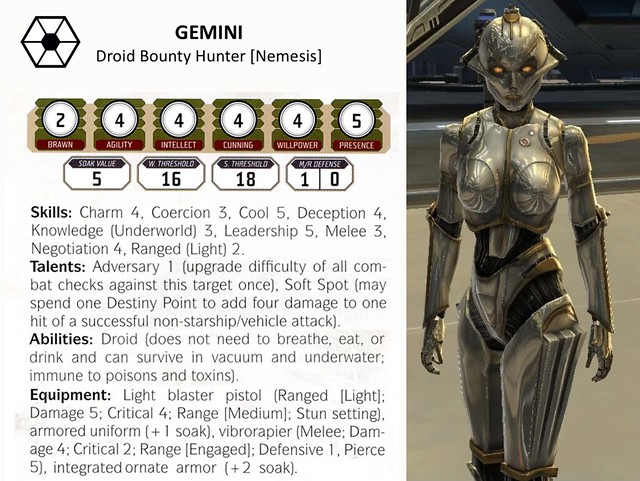