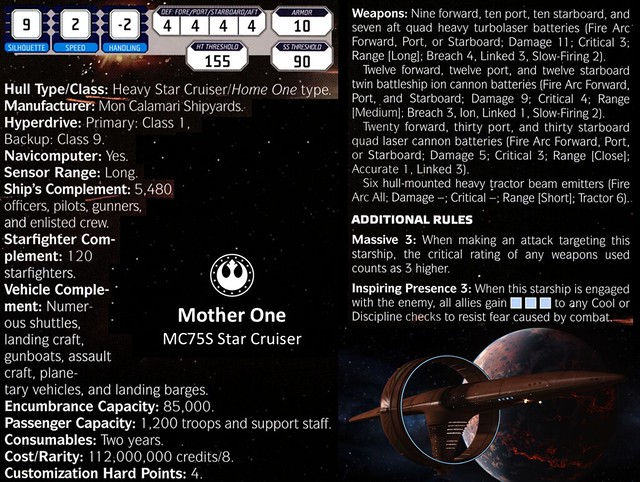 Arriving at the ships in the docking bay of the sinking Kaminoan arcology, Raj's desperado Jax Cadderly & his sidekick Sshushath the Zode, with Joey's replicant Jolit right behind them, run into the luxury yacht-turned-pirate, The False Profit which the spydroid 4-DOX has been prepping for launch.  Para Totool, Rachel's ex-military scientist & the droid Wrench board as well, as her TIE Interceptor is still docked, but Burke's cat-alien, Theynur Kötturinn, jumps in the X-wing her astroprobe Kaytee has been keeping hot.  Between Para & Theynur, the ex-Imperial & the current Republic informant, they figure that the encrypted signal they've been recording is on an old Imperial code channel, abandoned after the Empire discovered it had been cracked by the Bothan SpyNet.  Deciphered, a familiar fishy voice rasps over the comms:

"...I repeat again: this is Navigator Marid of the Old Daughter calling the crew of the False Profit.  My friends, I doubt this message will reach you in time, but I must try.  I'm afraid not all of my mob on the Old Daughter trusted you all enough, & we have violated your faith in us.  One of the Verpine clutch-leaders was a member of The Bothan Spynet & placed a tracking beacon on your vessel.  You must get clear of your last location; the New Republic is moving aggressively & our fledgling Resistance has little sway against them.  We have scrambled your original transponder codes so you are clear for escape.  I repeat again: this is Navigator Marid…"

As this message unspools, we quickly pan up into the starfield, into the approaching forces of the New Republic, to get a glimpse at the other figures striding onto the stage...

The New Republic Defense Fleet is spearheaded by Mother One, a MC75S Star Cruiser from Mon Cala & a flotilla of her corvettes: the Old Daughter (CR90 with armor & hangers), Prodigal Son (CR90 with stealth mods), Big Sister (CR90 with comms & command mods), Middle Child (CR90 with speed mods), Tomboy (CR90 with ram mod), Troublemaker (CR90 with weapon mods), Black Sheep (DP20 with ion weapons), Bad Boy (DP20 with amenities mod), Lonely Hearts (DP20 with droids & slicing) & Spoiled Brat (CR92a).  Heavy assault is provided by Mark II Starhawks from the Nadiri Dockyards; significantly smaller than the Mark I, they trade the tractor beam projectors for shield drainers & pack the same punch: The Accord, The Consensus, The Armistice & The Covenant.  On the bridge of Mother One, located in the lower spar connecting the central mass to the construction ring, is:

Builder Q’voss, the tentacled Quarren "admiral" of Mother One.  Old enough to have complicated feelings about the clones from her time as a Seperatist, she's anti-monarch but pro-New Republic, & is dressed in an Ackbar-like white padded unitard & tunic with rank markings.

Strategos Bri Gwynn, the furry Bothan spymaster.  Think of her like C.S. Lewis' Mrs. Beaver or a kindly otter grandma with a cheerful twinkle in her eye who you can totally imagine ordering many Bothans to their deaths.  She's wearing something like Mon Mothma's ceremonial robes & jewelry.

General Trask, the gruff human general from Raj's game with a license for "Special Operations."  He is the personification of "the ends justifies the means," & his elite team of former Rebel shock troopers are the best of the best, or the worst of the worst.  Raj describes him as blonde & buzz-cut, old but still in the same buckethead haircut. 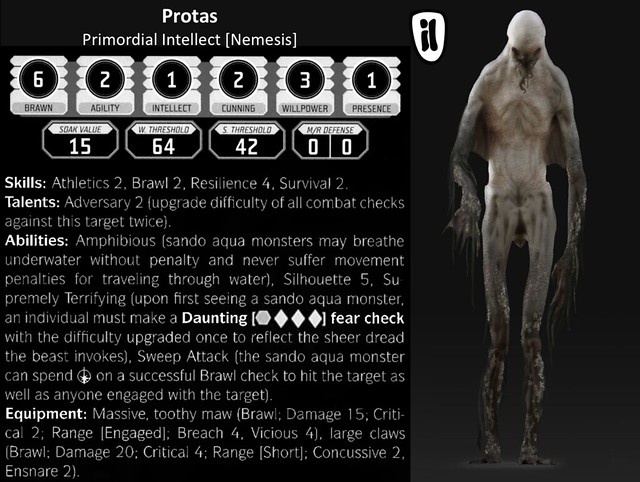 Like a pale deep ocean creature on the sea bed sensing a falling whale carcass, some kind of massive, ichthyosis humanoid has come to prey on the vulnerable fleeing Geddon.  By massive I mean, bigger than a star freighter, a goliath more like a kriffing frigate.  What kind of black magic could awaken such an ancient evil...unless...it was drawn by Theynur's persistent contact with the Dark Side?  The entity is terrifying in a primordial, fight or flight way: this must be “One of the Old Ones" that Lili Tu spoke of when she said “not all of our kind chose the path of higher evolution,” a being from the collective memories of Kaminoan myth & legend, like Melkorr & Protas.

Punching it out of the hangerbay's forcefield, the water immediately starts taking its toll on the ships, adding penalty dice & system strain, but it is the gut-wrenching awe & overwhelming panic the ancient giant incites that really puts the screws on them; but on the plus side, their dramatic egress is enough to distract the thing from cracking open an Ugnaut lifepod...as it decides they are more tempting morsels!  As it paws with enormous flippers at Theynur's X-wing fighter, talons spiderwebbing the cockpit, Jax grabs the thing in the staryacht's tractor beams, dragging it off of her as the False Profit homes in on the beeping code signal Zed gave them for the emergency escape pod he said he was going to stuff the cadets into.  They quickly dock, & Jolit is pulling the young clones out on the double, just whole fistfuls of kids, when the webbed claws of the monstrous Kaminoan leviathan comes out of the abyssal deeps, trying the rip the pod off the docking clamps & scuttle them both.  It's too late!  Jolit hits the blastdoor, sealing the hatch with all the children safe inside, as Para brings her TIE Interceptor awkwardly & bubblingly around to blast Protas, who lets out a scream of frustration like the Beast in Krull before sinking back into the stygian depths whence he came.

Zed isn't with the cadets; their leader Skip gives Jolit a holochip & tells them that the old clone stayed behind because "the shield is still up."  Zed had to disable to triumvirate-city's planetary deflector shield generator, or else their ships wouldn't actually be able to escape: let's hope he made it in time!  The chip has ZD-066's chaincode embedded in it, & holds his last message as a hologram.

Zed salutes: "Commander, I had some time to think about what you said, & you are right...I don't know why I thought I could teach you about The Force.  But I believe that you will find someone who can show you your place in all of this.  As for the kids; if you could swing by Mandalore on your way back to Ord Mantell, or after, just look for Clan Fett.  A number of my brothers went back to the motherland & adopted families when the Clone Wars were over, & they will take them in & give them a home that loves & honors who they are.  Theynur...trust yourself, & trust The Force.  Alright is that the last one in?  & the rest of you: The Force will be with you, always.  Robots too."

Then the sounds of violent ejection & the recording blips out. 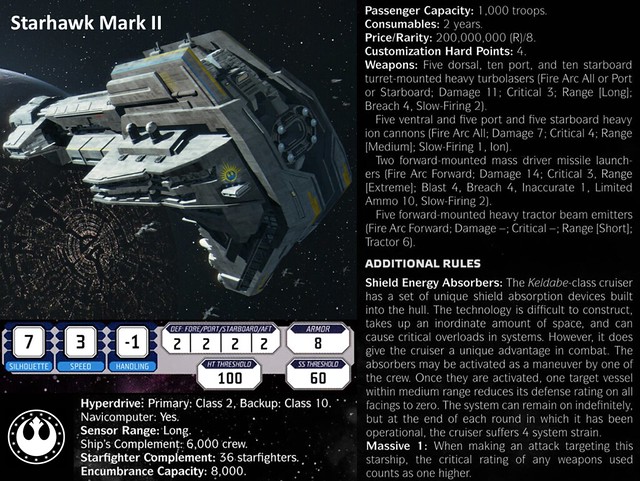 Navigator Marid's as good as his word, & with their transponders scrambled on New Republic channels & the Praetorian Imperials too busy getting hammered by an attack apparently out of nowhere, the players manage to slip through all the space action unnoticed, as crimson Star Destroyers scramble to disgorge swarms of TIE fighters & the massive turbolaser batteries of capital ships pound relentlessly away at each other as the Starhawks come in close range & start tearing through the imperial's shields.  A lovely sequence for them to slip right through, engaging the hyperdrive; stars streak & then realspace gives way to that familiar hypnotic vortex.  The organics let out a sigh of relief…

...just as they are torn sideways out of hyperspace, violently pulled back into sunlight in a riot of painful rainbows.  We in the audience know what this laser horror show is: an Interdictor pulling them out of hyperspace with an artificial gravity well.  Directly into the path of a Super Star Destroyer's tractor beams.  Just like that, the trap is sprung, & Imperator Pryl has them in her clutches.  As the False Profit sits frozen & Jax, Jolit & the other droids try to pull one last trick from the ship, sound fades out & Para & Theynur fade in to a modest Imperial ready room, with a white-clad Imperator sitting at the table, waiting for them.

"Please.  Sit with me.  Talk.  I misunderstood what was happening with you for a long time...both of you.  & with...myself.  Do you know the game Shah-tezh?  Palpatine loved it.  Plans within plans, betrayals & counter-moves...it is easy to see the game's effect on his psychology.  I don't flatter myself that I was ever anything more than a pawn in the Emperor's game, but his Demesne has fallen, his Knight has betrayed him, his Outcast has failed…& a piece that makes its way across the board can be promoted."

"You...don't understand what is going on here; not on a galactic scale.  The Praetorians are not the only Imperial Remnant, & I am not free to act on my own, but we are the only thing keeping Palpatine's Contingency at bay.  You'll carefully note that my forces have solely attacked military targets; we will need a strong & unified defense for what is coming.  Beyond that, there is wherever Sloane & has gone, & whatever Thrawn has planned…I have many allies amongst the fleet but I need the Royal Guard's mandate or my control will slip to ISB, & then, we're done for."

"Come with me, just you two, & we will let everyone else go.  Para knows I'm trustworthy, but beyond that, by coming with me you can ensure I can't try to wiggle out of it somehow.  Think of all the lifeforms, all the programs, on that star yacht; aren't they worth being brave for?  Aren't they worth the risk?  It is for me: if the Guard knew I was proposing letting their next generation slip away, that would be the end of our fragile alliance…"

"What the galaxy needs-- what I need-- is a Right & a Left hand.  Theynur...you must feel this...connection between us.  I can take you to teachers who are free of the dogma of the Jedi & the Sith.  & Para, you know how the Empire failed, but if you come with me to Dathomir, I can show you what is truly at stake, & what we can become."  Be my Counselor & my Vizier...or my Knight," glancing almost shyly at Theynur.

"Join me.  Please."  & they snap back with a jump cut as she releases the tractor beam.

& Theynur's X-wing docks with the Super Star Destroyer as the rest of them jump away.
Collapse