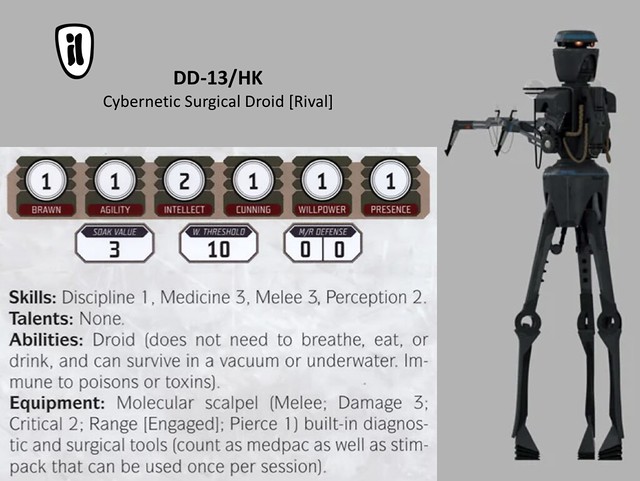 Deep beneath the seas of the cloner planet, Kamino, the heroes of our Star Wars campaign, End of Empire, have come across some sort of pelagic Observatory, a secret subnautical stash of Sith artifacts & other Dark Side paraphernalia mingle with the most cutting-edge medical atrocities & cybernetic crimes against sentients.  In its lower most depths is a carbonite freezing facility suitable for organics...but the carbonite tanks are ruptured, covering everything in an translucent black coating, slippery & invincible.  "Everything" includes a medical droid that Burke's character Theynur Kötturinn, the furry Farghul Force sensitive, recognizes from her earlier hallucination, or "vision."  Jax Cadderly, the ever sly gunslinging scoundrel that Raj plays, makes sure that thawing out the carbonite won't re-open the fissures in the bulkheads, & as Joey's character, the dangerous human replica droid Jolit readies his vibroaxe, Rachel has her character Para Totool, the ex-imperial special projects researcher start the catalyzation process for the carbonite melt.

DD-13/HK is a cybernetic surgical droid, a dainty Edward Scissorfingers in a awkward droid ballet of scalpels, needles & drills, with a binary "chk chk chk" laugh like the sound of static.  Thawed out, when asked about the missing STARKILLER datatapes, it sort of serial killer giggles: "Oh I, chk chk chk, quite see the confusion.  I'm afraid to report that those holotapes are in fact part of my current firmware configuration & can't be removed without quite some effort.  Of course, I am content to come along with you to that end, tk tk tk, & I will quite happily tell you anything you want to know!  I'm just curious which one of you opened the Vault doors.  My Master will be most pleased to meet you!  &...perhaps you would consider giving me a tissue donation for...chk-chk-chk research purposes?"  When asked about his 'Master,' the droid gestured widely, spinning about in a full rotation & a half around its torso, knife-hands glittering, laugh-vox tittering, "chk-chk-chk…haven't you been paying attention?"

"Did you ever hear the tragedy of Darth Plagueis The Wise?  I thought not.  Darth Plagueis was a master of dark science, cloning...secrets only the Sith knew.  He became so powerful & so wise he could create life...& the only thing he was afraid of was losing his power, which eventually, of course, he did.  He died in his sleep.  Ironic. He could save others from death, but not himself.  Luckily, he taught his apprentice everything he knew.  I myself was programmed by their droid, 11-4D."

"Recently...there was an...Awakening.  Something triggered in our imperfect clones, some unifying principal of constructive self-destruction.  They broke free from their tanks & then began to destroy each other; tearing one & other limb from limb, always...chk-chk-chk...cackling.  Then structural integrity of the facility was compromised, & my sensors went dark, presumably from the venting carbonite from this damaged unit."

Pounding from above rocks the drowned spire back & forth & cuts short any further questioning; both Para & Jolit recognize that familiar floor-shaking jolt: orbital bombardment!  The same klaxons from the memory-visions cut in as the entire city-facility shudders.  Already paranoid about the moist, creaking bulkheads, that's all it takes for the PCs to make a break for it.  DD-13/HK "helpfully" comes along with them, & they ascend in the turbolift as black water begins rushing in below them.  They quickly rise past the mysterious & fragmentary occult paraphernalia, past the ruins of the blasphemous cloning chambers, past the medical cruelties of the cybernetics center...only to realize that the Vault Door is not open!  But not to worry; by now, for better or worse, Theynur has gotten in synch with the Force currents of this Dark Side vergence, & she opens it well before they become trapped in a meatgrinder.

As soon as their commlinks are able to get a signal with the surface, & the espionage droid 4-DOX contacts them from back at the ships.  "Sweethearts, I've got bad news & good news & then a bit of a…mystery.  The bad news is that it looks like somebody slipped a tracking beacon onto Our Cat Friday's lil' X-wing.  The good news is that I found it because this cute little fella—" followed by mynock burbling— "ate the power cables off the dang fool thing like a good little girl.  Or boy.  I ain't peeked under her skirt.  Anywho there is an encrypted signal being transmitted, on the same frequency as the homing signal.  It's not a code I've ever seen before but maybe one of you darlings might recognize it...?" 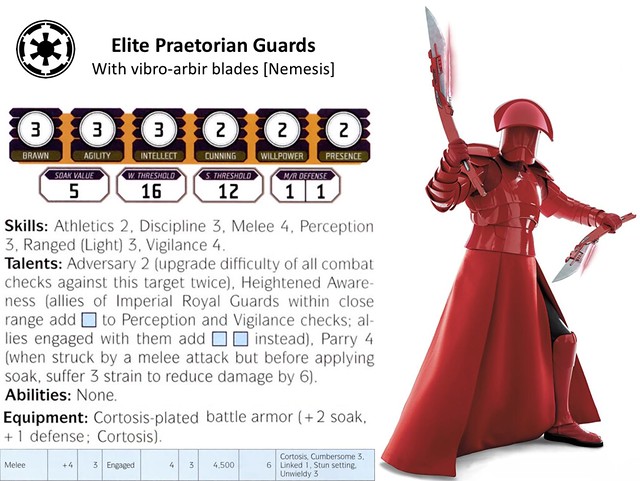 Finally arising up from the "inverted tower," they find the industrial center slowly filling with water as well!  It is not the frantic leak from below, but rather a controlled flow coming from valves in the walls, like pool circulators, & stepping out of the windowless factory zone into the corridors, you can see that the ocean level is now three quarters of the way up the porthole glass— the city is sinking!  Or rather, to be more precise: the city is submerging.  & Lili Tu, the Kaminoan Sophist in charge of the Geddon research is there waiting for them, flanked by two menacing lobsterback figures: their aura is familiar, similar to Palpatine's Royal Guards, & the audience will recognize them from Snoke's throne room in The Last Jedi.  These Praetorians confront the party as the structure continues to sink, with Lili Tu mumbling to herself— or them?— with an eerie calm: “Not all of our kind chose the path of higher evolution & we follow them now as we adopt the Benthic Stratagem in response to current changes in Galactic trends.”

Zed, the rejuvenated-but-still-old clonetrooper they've been traveling with, takes one look at the three of them, turns to the rest of the group & says "well, these guys look like a couple of dank farricks!  We must have just missed them by taking the backway into the Gene Bank.  Wow, yikes; good luck with them!  I've got to go rescue my brothers, the cadets, & get them to an escape pod & you have to push through to the ships so you can pick the capsule up.  I'll set the transponder so you can find it, & may the Force be with you!"  & with those words of encouragement, he uses the upcoming battle as a distraction to slip away, with Jolit & Jax muttering "typical" to each other with matching eye-rolls as he exits, stage right.

In the fray that ensues, the Praetorians alternate between wielding their weapons like a double-bladed polearm or splitting it into two for quick, rapid dagger strikes.  Almost immediately, one disarms Theynur of her lightsaber as she takes the bait at its feint, & the other dodges Para's blaster bolt, faking a lunge at her that spooks her flat on her behind.  Jolit & his vibro-axe go for the one heading for Para, as Jax levels his pistol & dead-eye blasts the other Praetorian straight through its faceplate, Skywalker lightsaber-style, before it can follow up on Theynur; Jax doesn't even flinch as Lili Tu's own hold-out blaster bolt wings him in the arm.

In all the confusion the Sith droid betrays the party, swiping its bladed paws & appendages at Para, who kicks back at it, keeping it at bay effectively, if undignifiedly.  Scrambling for her lightsaber, Theynur flails with the laser sword at the Praetorian wildly...managing to accidentally behead Lili Tu in the proccess.  As the flooding waters carry the decapitated body away, sucked into the vortex, Theynur can see malevolence & paranoia given shape in some kind of pyramidal relic tied in her robes like a netsuke; The Sith Holocron of Darth Andeddu, which must have served as her key to the Observatory.  Ssushaath has been blasting away at the remaining Praetorian, hissing aggressively, but it keeps spinning its blades & coming on relentlessly.

Para & Wrench are fumbling in pouches, with tools, getting in each other's way trying to rig a restraining bolt when Jolit just brings his blade down on the wicked robot's "neck," severing its central processor & rendering it immediately offline.  That's just the opening the Praetorian needs, as it delivers a brutal blow to the replicant.  Jax joins Ssushaath's barrage on the Praetorian, & the two of them begin blowing off entire pieces of its armor.  Despite taking a bad hit, Jolit himself is not easily stopped & it's his vibro-blade that ends up lodged fatally in the organic Praetorian rather than vice-versa.  In the samurai-still that followed, Para grabbed the droid's head to salvage it's memory banks, breaking the moment of silence & sending everyone sloshing back to their ships. 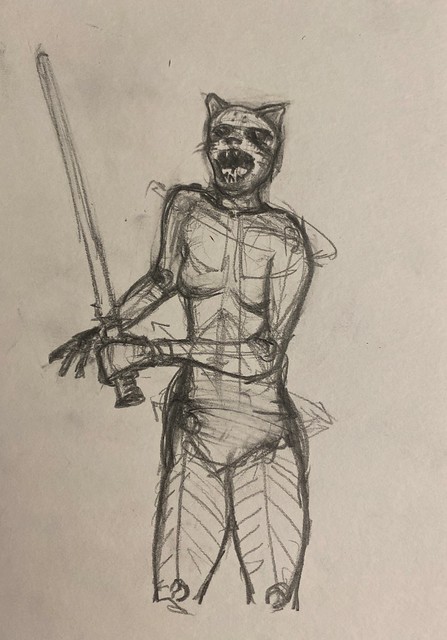