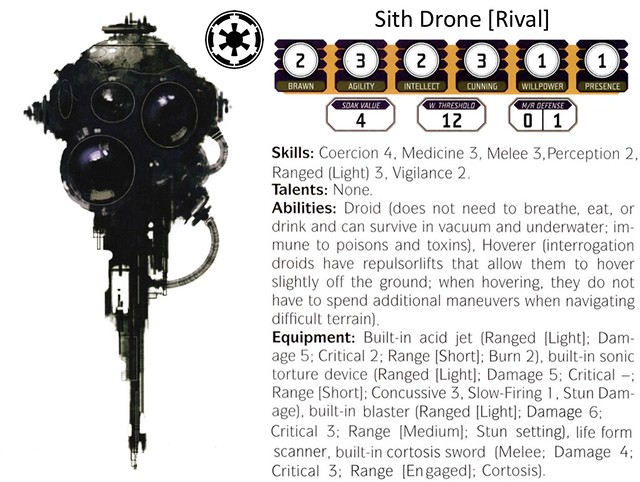 Imperator Pryl is clad in a minimalist breathing mask & turtlenecked white bodysuit, like an inverted version of a stormtrooper’s underarmor marked with a red Imperial wheel; once pristine, now torn & bloody. Her red lightsaber ignites & sings, breaking the darkness, cutting a thorned vine here, blocking a sudden laser blast there, & then its bloody gleam is again abruptly gone, as she runs through the alien brambles in the night.

She sprints through a toxic jungle, full of giant predatory plants & strange mists, pursued by sleek, black Sith droids. They float on antigrav drives like giant spikes covered in blistering eyes. Their sections rotate & spin, thrusting out sudden blades in the dark, spewing flesh-melting acid, scintillating blaster bolts, wobbling Geonosian sonic blasts. It is a Dark Side Rey’s obstacle course meets Thufir Hawat’s deadly training remotes, & one of the drones closes in on the Praetorian leader as she jumps & tumbles.

The Imperator bursts through a copse of razor fronds & giant flytraps, gathering a few more scrapes & scratches…& coming up against a hangar bay forcefield, a wall of rectangular blue light showing the iridescent Bright Jewel Nebula & the planet Ord Mantell below. She’s aboard a converted deck on one of her massive Super Star Destroyers, a window of colours amidst a black bulkhead, a wall she is suddenly trapped against. She turns to face the bot & with a shiver...suddenly straightens, as in the distance, the talltrees of the poisonous forest— which reach almost all the way up to the support struts of the shadowy ceiling above— sway & shake with an ominous, guttural growl like the first season of LOST.

“Override code: Ichor.” The machine falls instantly still, interrupting it’s imminent attack & retreating in stand-by mode back into the foliage & for the first time, the impassive features of the Imperator crack, as a fraction of a smile curls at the corner of her mouth.. The fetid flora nearby rumbles & sways, shuddering with a moaning, unearthly roar that grows closer with stalking Jurassic Park thuds. The Imperator remains perfectly still, waiting, watching the writhing copse with a grin...that suddenly dies, her expression regaining its icy disposition. With a gesture from the off-white adept— a flick of the wrist, really— the brobnagarian groaning & shuffling from within the primeval tangle goes still in mirror. 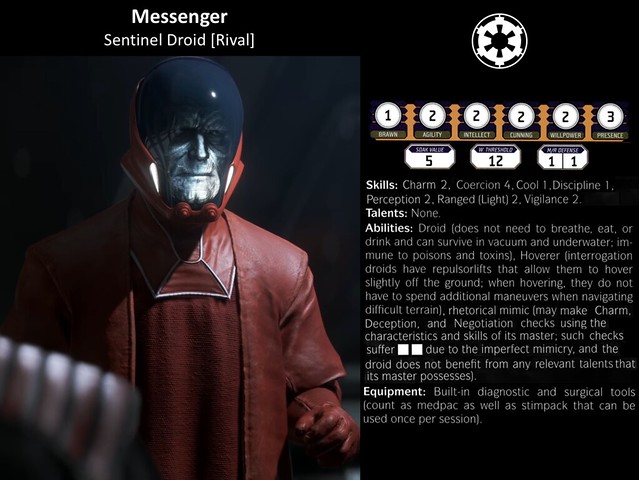 A blast door in the wall slides open, with no fanfare or warning. The Imperator, in the moments since the camera cut away, has already discarded her rebreather & retrieved her alabaster cloak & its ancient broach, draping it around herself with a flutter & composing herself for the two crimson clad Royal Guards who ceremoniously march in. As they position themselves wordlessly behind the Imperator at the edge of (the now eerily quiet) venomous overgrowth, flanking her, a similarly coloured droid with a black faceplate glides in behind them with probe-like susurrations, hovering in wide, menacing cardinal robes.

Coming close to Imperator Pryl with the uncanny smoothness of a repulsor lift, the red robot silently extends its gloved palm. Half-lit by the high-tech glow of the ship’s shields on the right but cast in the spectral shadows of the ghostly forest to her left, she clasps its hand reverently without a moment’s hesitation, recognizing the Emperor’s Sentinal, & does not flinch at the hiss & prick of the needle that tastes her blood to verify her identity. “Verified,” utters the thing’s mechanical voice, as the blank dome of the android flickers to life with the unholy visage of the late Palpatine, twisted with evil, flickering on the holoscreen.

"Operation: Cinder is to resume at once. Resistance. Rebellion. Defiance. These are concepts that cannot be allowed to persist. You are but one of many tools by which these ideas shall be burned away. Heed my Messenger. He will—”

The flaming red of the Imperator’s lightsaber pierces the twilight, as she cuts the Emperor’s soliloquy short with a fatal system error, bisecting the Messenger with a heavenward strike. With one iaijutsu cut, it falls, a junked pile of tattered vermillion cloth & a metal skeleton halfway between the old B-series droids of the Confederacy & Maximilian from The Black Hole.

She spins, her ivory cape billowing, pallid in the gloom, rubicund blade before her in a defensive position. The two Royal Guards break their impassive stance with the death of the automaton, surprised by the sudden violence but with their forcepikes instinctively at the ready, eager for vicarious vengeance for their dead master, or at least the apparently treasonous destruction of his avatar.

As Imperator Pryl whirls to confront them, the camera cuts to frame her face, ablaze now in the sanguine radiance of her weapon, eyes wild, breaking into a wide smile ear to ear as the clashing & clamoring from the jungle returns, louder & louder, just off screen: a thunderous crescendo of howling terror breaking through the haunted thickets, stomping doom & crunching death.

[Cue the orchestra for the Star Wars overture] 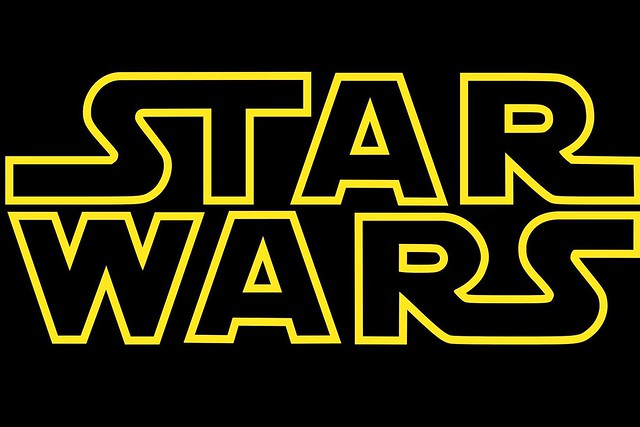