The prior session of our Star Wars campaign was the obligatory race sequence that George Lucas baked into the setting's foundations; this chapter of Star Wars: End of Empire flowed right into the equally mandatory coliseum scene, chockfull of creatures & monsters, & ending with a bang. Like my D&D campaign, this episode was mostly in "initiative order," which slows down the pacing but makes for dynamic action sequences. The custom dice of Fantasy Flight serve well, but the actual nuts & bolts of the rules seem, well, confusing & over-wrought. I admit that the homebrew guy in me has been turning over a few house rules for a stripped down version of Genesys, their generic system...but for this session I continued my general agenda of handwaving away too much mechanical granularity & relying on interpreting the symbols on the dice with ad libbing & imagination.

The players are here competing at the whim of Baron Monstro, the fabulously wealthy & erratic noble who trained Eris Berserk, the party's friendly neighborhood Chiss cyborg privateer. Monstro has promised to reward them with the answers they seek about the STARKILLER project as a "favour" for their participation in his little deathrace, & while Eris, the Trandoshan ex-gladiator Sshushath the Zode & the droids look on. The rest of the competitors have their own favours to deal with, but the winners get a "wish," which the Baron has said includes anything up to half his financial holdings, & as he is the controlling shareholder of Kuat Driveyards, that means something quite substantial. "Winners" in this case meaning our protagonists, for winning the race through the Solar Labyrinth against all odds, as well as "whomever brings me the kyber pearl from the heart of the Krayt dragon that I'm about to let loose in the bone-strewn crater where the surviving maze-races have gathered," or such is the jist of it. 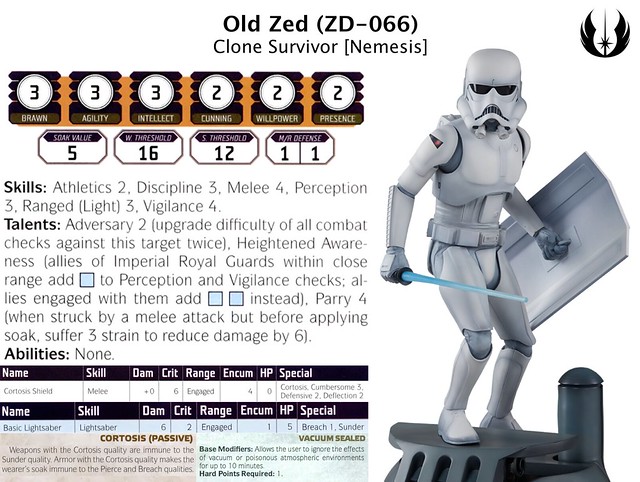 Here's the situation: Rao Kast is a retired assassin, a Mandalorian who dual wields two lightsabers: he's no Jedi but the laser sword is a power symbol for his people, as well. Since then, he's become a Black Sun Vigo who still likes to get his hands dirty from time to time, especially over personal grudges...like the one he has for Raj's Jax Cadderly. Somehow the gang boss got the idea that the fast-talking, gun-slinging scoundrel Jax cheated him in a game of chance, & Cadderly has had to look over his shoulder ever since. He's joined the royal rumble with his surviving gangsters, as has Old Zed, the spacetrooper armor-clad man-at-arms who has been sitting at the Baron's right hand through most of the preceding events. Add to that the CEC sponsored team of candy-coloured Duros & Twi'leks & the Tantal Rangers from Nubia that made it in time, & it is quite the full ticket.

"You should have stayed & faced the music, Jax. But instead you made me chase you, so now I'm going to make you watch me kill your friends before I turn you into bantha fodder & take your head home for my collection— I'll put it in a place of honor, right next to the crystal skull of Xim the Despot!"

Rao Kast, in his Rinzler-black armor, descends in a repulsorpod, riling up his troops— the howling, huffing Hopper Rose & the sniveling Skeeter— while failing to intimidate Jax, who knows he's just a middle manager with a sad soul patch at heart, even if he is a Crossfit ripped sociopath who sits on a literal throne of bones. Instead, the Corellian troublemaker runs over to the Sisters Sugar, the pale & pink Duros with their muscular blue Twi'lek sidekicks, & offers them the "wish" if they help the players stay alive. It's a heck of a deal & a great Negotiation check, & so they agree; the bug-eyed alien sisters clicking their heels together to activate jet boots while the tentacle-headed adonises hunker in behind cover, laying down close range cover with long-barreled blasters set on stun. (They are professional competitors on a circuit full of shifting loyalties, & are conspicuously non-fatal but pro-spectacle in their approach.)

While Jax Cadderly is making his play, the force field drops & the vast, slithering monstrosity of the Krayt dragon hoots & howls its way in— only to be captivated by the power of the Force of Others, as the felinoid alien Theynur Kötturinn, Burke's Farghul fringer, opens herself up to the connection between all living things, pacifying the creature in a moment of supernatural emotional vulnerability, a Moment passing between them. While this is going on, the crowd is roaring, struggling to shout in unison. When the chants synch up, the Baron, playing histronic ringleader in his golden power armor, effects change in the coliseum. "DARK! DARK!" they scream, & with an over-dramatic flip of a switch he makes the skydome opaque, shutting out the magnetic aurora caused by the planetary eclipse.

Unable to hold tight to her tranquil center of inner peace, feeling her control of the Force & the Krayt dragon slipping, Theynur taps into her rage & frustration; the snakecharming of the beast becomes a iron fist of oppression & she brands the Black Sun gangsters in it's mind as hated foes as it breaks from her psychic grasp. The blue zaps of the CEC team's stunblasters don't seem to be doing much but keeping the creature berserk, though they do manage to channel it's frenzy of violence away from the themselves & their allies. The crowd's chants change to a call for "FIRE! FIRE!" & the Baron causes the stadium to respond in kind, pressing buttons & spewing gouts of flame from secret nozzles & sprayers.

Cut to space. What looks like a cosmic storm coalescing, complete with eerie blue flashes of lightning & condensing clouds of stellar gas, alerts the orbital watch stations as klaxons blare to life.

Gunners in glossy white backwards-pointed helmets at Subpalace Esk: “We’ve got an unidentified hyperspace signature coming out too close to the gravity well. It’s big & the transponder says its one of ours, but we’re spooling up the defense grid, just in case.”

Both Para Totool & the human replica droid Jolit are caught in the inferno! Para, Rachel's former Imperial tech officer, makes a run for the hoverpod that Rao Kast came down in, sprinting right through the blaze & making a jump...just barely grabbing on as it resumes its ascent. "Wrench," the ID9 mini-probe droid, is off from his usual perch on Jolit's back, hovering up to go assist Para just as a geyser of napalm forces Jolit back, engulfing him in fire & separating him from the rest of the group. While he's reeling, the Black Sun gangster Skeeter, with a mohawk & a tattooed Mandalorian "T" on his face, keeps pelting him with old skulls & bones from the battleground floor before running over to tackle him, as the spice-huffing, nonsensical obscenity screaming Hopper Rose, high out of his mind & ready-deadly starts peppering them with a hail of two-fisted blaster bolts. Elsewhere, the rangers from the Nubian team have moved in aggressively on the Krayt dragon with armor piercing force pikes: they must have had inside information, because they clearly came prepared for this hunt.

Jolit, played by Joey, is a replicant whose replacement parts have him passing as a cyborg, & luckily he's stuffed into heavy enough armor that the fire safely burns itself out, as they do with Para's heavy-duty armored mechanics coveralls...though she continues to plummet skyward as the autopilot on the pod continues to gain altitude. She clambers inside & rips open the control panel, frantically pulling out components in the hopes of rigging up something, anything...& rolls uh, less than good. So instead she successfully removes...the calibrator on the repulsor drive, causing the pod to, well; drop. Things are going better for the human replica droid; throwing the thug Skeeter off of him, he lifts his vibroaxe & with a vicious roundabout embeds it straight in the punk's skull. I figure this is Star Wars, so the action is on-screen but the point of impact isn't shown: the fatal cut is mostly communicated in foley work, a gruesome sound effect for the wet thunk of finality. 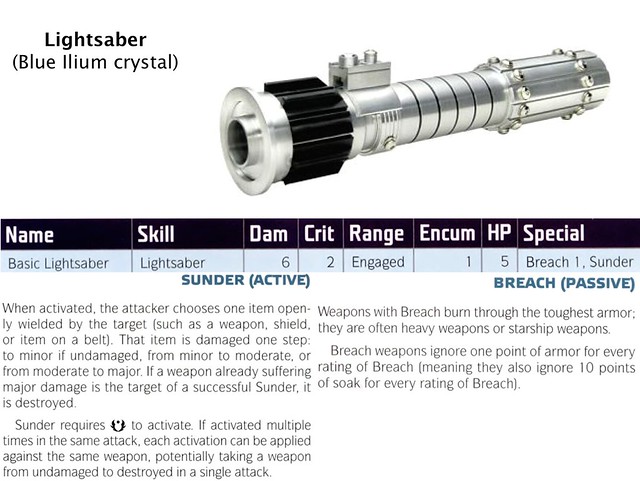 Rao Kast starts off the fight with a flurry of crimson blows & feints; gaining a little space & leaving the felinoid Force user with a notch burnt in her ear, Rao brings both his dual red lightsabers to bear on Theynur...only to be foiled by the imposition of a cortosis riot shield, belonging one Old Zed! The white armored man-at-arms tosses a little cylinder to the cat-like alien, who pulls it to her with a tug of the Force, igniting it with a hissing whoosh: a blue lightsaber? Followed by the ignition of another blade of light in Zed's hand! Jax, seizing the moment, shoots the Black Sun Vigo in the back, & Rao Kast disengages, hitting a button on his suit & initiating optical camouflage, cloaking him in near-invisibility as Hopper Rose takes another hit off his aerosol mask & screams incoherent filth into the mouthpiece. "I'll send you a love letter straight from my heart, you sleemo!" Meanwhile, up in the skies above, Para's sinking hoverpod is saved thanks to the little droid ID9-WR3-H, as Wrench plugs a port in & throws on the emergency inertial dampeners. & then, just as things are getting good...

The ISD Gargoyle is an old, Imperial I-class ship, but storied; the fearsome beast painted on its hull mark it as part of the old Outer Rim fleet that the Thrawn’s Chimera once belonged to. A vicious black wound vents plasma & atmo into space; the wreckage of the Vigil-class Rubicon, flung like an javelin into the hull of the Gargoyle, which now plummets planetward.

The orbital sub-palaces start firing wild, as screams come over the comm channels, & laughter; like a clip from Event Horizon. "Ytik, what are you doing? Why do you have your sidearm out? Oh N—" The platforms even start catching each other in friendly fire as static sputters. "...Brezel...come out come out..." The Gargoyle takes turbolaser blast after turbolaster blast, guts hollowed out & greebles blown off, but not enough to stop its momentum; the Star Destroyer keeps hull integrity & blows past the blockade, hurtling towards the surface.

Piloted, somehow still, barely holding together though slowly sheering in twain during entry, nose up, eventually crashing, plowing through the Solar Labyrinth like a white knife through black silk…sliding to a stop...right in the middle of the Coliseum, the nose of the triangle shattering ancient archeology & cutting edge technology alike, an arrow cracked in half & pointed at Theynur, as if her song to the Dark Side had beckoned it. A pause, & then the airlocks & hanger bays fall open, as a hoard of slavering, mindless stormtroopers & non-comms, engineers, pilots, officers, even a shaky-legged AT-ST all come pouring out…followed by the spontaneous violent rioting of the people in the stands. 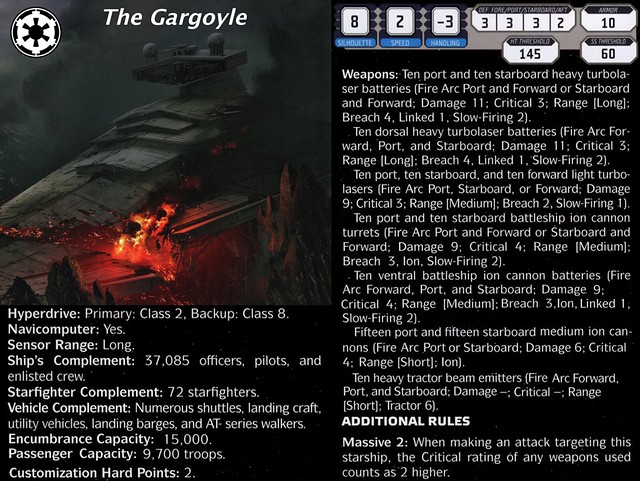