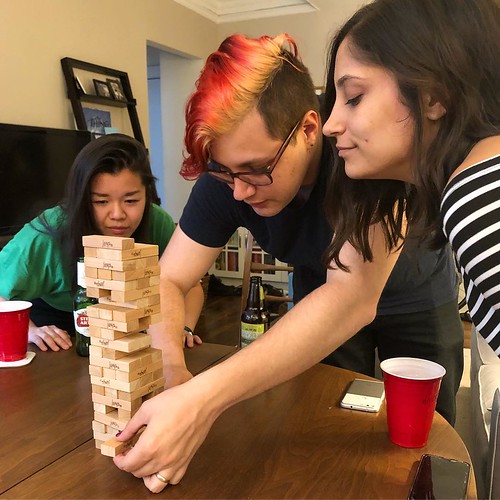 We skipped Tom's usual Halloween game of Dread last year, which are the contemporary incarnation of his old Dead World one-shots, so it was a treat to crash one in to a weekend afternoon! Nicole (The Doctor) & Luke (The Captain) have played in one before, & we're joined by Carl (The Navigator) & Ruoxi (The Engineer), who are editor friends I work with. I played The Geologist, & my obvious cyborg enhancement was in being purposefully subdivided across the corpus callosum, with neuro-accelerants & glial boosters keeping us in a state of amicable cooperation, able to do two things at a time. The problem was, I didn't have any military training, & when the Big Lebowski pacifist captain lied to us about how the grenades worked, I didn't know any better. Shame about those horrifying headcrab zombies killing all of the men, but a nice horror movie "moral" with a modern twist. Also, secret laboratories? We got pretty Resident Evil on this one. A million miles of fun, & next time, I'm totally going to have an accent. Here's Tom's prologue:

It is the year 2070 and you are all crew members aboard the Nautilus Explorer - an Extreme Depth Exploratory Craft (EDEC) on a standard mission to survey possible ocean floor mining sites. Working for the Tri-Oceanic Corporation, you are returning from your 90-day surveying trip to mining outpost 17 (sometimes just called #17). This has been your home for the past two years. Located 6 miles below the Pacific Ocean, it is one of forty ocean-floor mining plants owned by Tri-Oceanic. During the return trip you receive a transmission from the communications base that four days ago Tri-Oceanic lost contact with another of its mining operations, outpost 37. Your orders are to attempt contact and report your findings back to base. You can’t help but feel a little apprehensive. Four days is a long time for com’s to be down, even for the notoriously unreliable deep-water radio system. Turn's out your gut was right.

As you approach outpost 37 it appears eerily quiet. Closer inspection only increases your unease. Normally a hub of bustling activity it now sits silent. Illuminated only by the gliding beam of your searchlight, the ghostly gray structure looms in front of you fading in and out of the abyssal blackness. Repeated attempts to make radio contact have been met with silence, although cursory inspection of the structure does not reveal any obvious damage. As you are finishing your survey something catches your eye. As you get closer, a debris field of escape pods, all of which appear to have sustained severe implosion damage, come into view. Caught within the twisted metal and glass, are the pale and indiscernible parts of what were once people. It is only more shocking because these are C-76 emergency transporters, large ships designed to carry up to 50 crew members. You have counted at least four of them on the ocean floor, possibly five. The thought of them all being full is too awful to think about.

The stunned silence that fills the bridge of the Nautilus is suddenly broken by a crackle on the radio. It’s base #17 asking for an update. As you begin to report your findings, a powerful explosion rips through the outpost. You watch as an entire section blows outward, then violently collapses in on itself as it rapidly depressurizes. A shock wave of twisted metal and debris smashes into the Nautilus’ side, peppering it with fist-sized holes. A steel girder the size of a small tree pierces the hull, rupturing the pressure control valve and bursting the ballast. With the sudden loss of buoyancy the Nautilus plummets to the ocean floor, smashing nose first into the sandy bottom before settling on its side. The lights go out, alarms begin to ring, and the sudden sound of groaning metal echoes throughout the ship as its pressure system begins to catastrophically fail...