IN THIS EPISODE OF OUT OF THE ABYSS: THE DEATH OF NORIN! 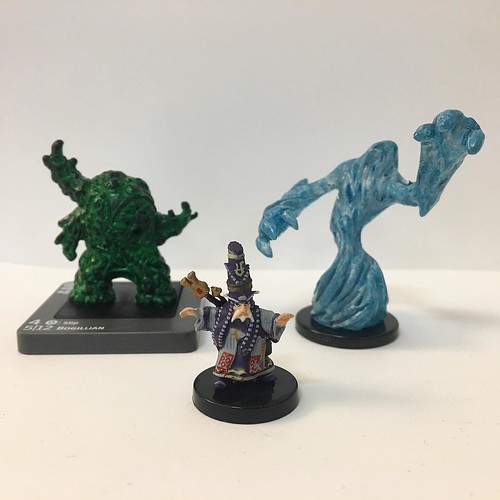 The last session concluded with our protagonists, still trapped deep in the Underdark, entering the Whorlstone Tunnels within the demented derro neighborhoods of Gracklstugh, The City of Blades. As for goals? They have a few. Uncover evidence of "corruption" in the city for Errde Blackskull of the Stone Guard. Find the stolen red dragon egg for Firekeeper Gartokkar, but at the same time report on the Firekeepers' plots to the adult red dragon Themerchaud first. Discover where the economy destabilizing foreign currency & treasure the derro are using are coming from for Ylsa Henstak of the merchant clans. All the clues have come together around one figure, & now they are in pursuit of a pale & tatterdemalion derro, one "Droki," on behalf of a significant number of parties, & in the midst of "Dungeon Time." That means pacing has slowed to a crawl, though we did an impressive job with staying on track & switching in & out of initiative order as needed. Now into the tunnels in earnest, the players have killed their one-time companion Buppido, whose lair they found within the twisting labyrinth & who attacked them while necromancing a handful of skeletons & ranting that he was the god Diirinka incarnate. Afterward, a ghost in that room asked them to find his corpse's animated severed hand to allow him his final rest. He was a gnome called Pelek in life, & his hand should bear a ring with an onyx stone. Before giving them a moment to compose themselves or regain their wits, our heroes are: Pritpaul's increasingly cannibalistic halfling ranger, Serafin; Jim's drow warlock, bound to the drow hero-goddess Eilistraee, Imica; Sam's thri-kreen bard Pook'cha who proved extraordinarily competent this session & Ellen's character, a wood elf cleric of the Red Knight who calls herself "Norin."

Beyond the haunted boneyard that Buppido claimed as his home, the PCs spot an odd scene; a ring of giant mushrooms around the wall, with moldy, overgrown kuo-toa standing perfectly still in the room, surrounded by broken bones. Then one of the giant toadstools shuffles nervously side to side, & our players realize: myconids! They retreat back to the skeleton strewn room from their scouting expedition, bandaging up their wounds & getting reading in case things take a turn for the violent. The Underdark's Darwinian intensity has taught them to be cautious of even the lowliest...but when they stealthily re-approach, they see now that the almost-humanoid fungal almost-people have begun to sway & dance around the room, all but one, while the two fuzzy fish-folk remain eerily still. Braving the spores, Pook'cha makes contact, inhaling the cloud of "rapport spores" that they exhale. Introducing himself as Voosbur, the "speaking" myconid adult keeps singing & vapidly saying that the Good Lady wants them to have a Good Time, because a Good Time is a Good Thing. When the skeletons came rushing out of the other room (having been turned by the cleric), the myconid troupe's Friends protected them, but that's why they were hiding...though now they are Dancing! The outcast myconid sprout over in the corner sulking-- gestured at with an appendage-like rhizome-- is "Norin," who doesn't seem to like to have a Good Time. 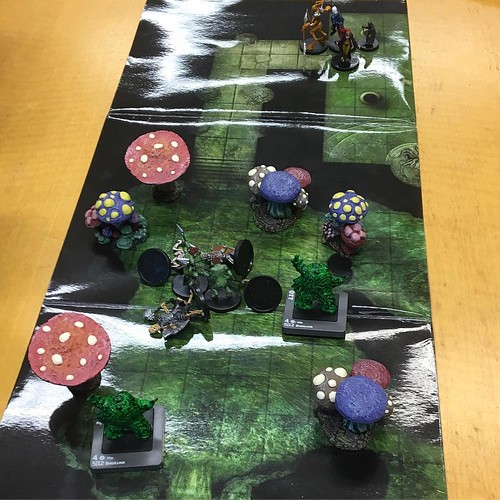 Oh great! Another "Norin!" The PCs knew this was coming; as their companion "Derendil," ostensibly an elf prince cursed to wear the form of a quaggoth, had his backstory muddled by the apparent existence of multiple creatures claiming to be polymorphed "Derendils." The stinger on that revelation was that there is apparently a similar situation of multiple "Norins," a category that includes Ellen's character. With no one else having inhaled the telepathic spores of the myconids, Pook'cha keeps the knowledge of another "Norin" to himself for the moment, & coaching the other adventures to follow his lead, the insectoid thri-kreen begins to dance alongside the fungal procession, keeping to their patterns but moving steadily through the room. The group dervishes across, some deciding to take a surreptitious gulp of the germinating spores to get a listen, as the myconids sing-songedly offer them the Gift of the Lady. Readers, they declined, & realizing the dance was coming to the end, the myconids used the blessing of the Gift of the Lady to psychedelically conga line into some of the mushroom patches in the room, a wriggling teleport that takes them far, far away in a single step. The mushroom "Norin" remains, however, & asks the group-- in a clear & lucid mental voice-- if she can accompany them, offering to help heal them if they can help her get out alive. One of her parents, Pylo & Basidia, wants to murder her, but she doesn't know which & so she fled, only to then narrowly escape being kidnapped by drow slavers. Sound familiar? It does to the PC "Norin," who elects to go by "Kris" in order to avoid a lengthy conversation about identity.

The Whorlstone Tunnel entrance was hidden by an illusion of faerzress, the fraying dimensional energy that suffuses the Underdark with differing intensities in different places. Here, it's a raw, primal force, eroding the very stone into the looping caves that comprise the complex. It is what the giant fungal gardens are feeding on, the decay of reality, & in the next room that is made extremely manifest. It is a vast thicket of fungus, cut back & trimmed in places but regrowing quickly, dense enough that only a Tiny creature could sneak through with any ease. Small creatures could try...& the players recall the Alice in Wonderland toadstools they saw Droki eating, "bigwigs" & "pygmywort" that cause those that eat them to enlarge or shrink, respectively, & decide to try them out. The elf "Norin"-- who was patched up by the myconid "Norin" but relieved to see that she didn't use any cleric spells, just first aid-- picks a few over-ripe torchstalks, & the whole mass quivers, one continuous & sensitive communal organism. A delicate business! "EAT ME" the toadstools metaphorically demand, &...you ever like, look at your hands man? They seem so small, man, oh woah man! My hands are small! I'm small dude! Thus reduced in size, our merry band of friends moves stealthily through the thicket...until they don't. Hideous swarms of giant centipedes erupt from the nooks & crannies of the mushrooms as they stumble, extra menacing to the shrunken heroes, & the cleric "Norin" goes to fire off a spell...before the Wild Magic of the faerzress takes hold of it, creating a secondary effect centered on her: fireball. 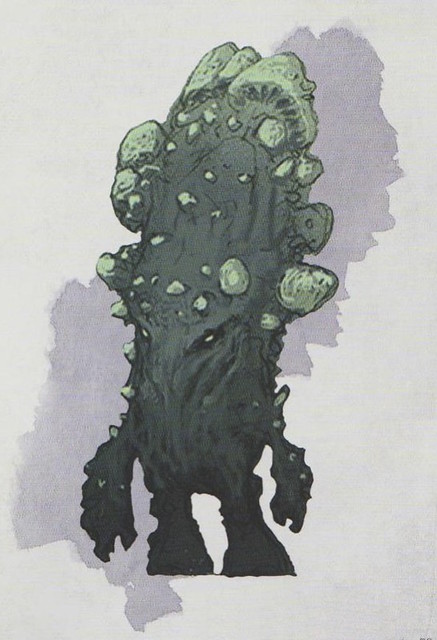 Fwoosh! Well, the first good news is that the first wave of creepy crawlies are neatly incinerated, along with creating a pretty strong deterrent to any further immediate attacks. The second is that since the exploding torchstalks were already picked, there isn't a chain reaction of any more explosions. The final piece of gospel is that Jesus saves, for half damage, as do most of the PCs. The bad news is that Imica gets badly burned by the sudden inferno, though the quick application of a healing potion by his old tutor Pook'cha helps mitigate the worst of his injuries. Myconid "Norin" is not so lucky. Ground zero for the blast, she is a charred mess of burnt flora & fauna. Searching her, they discover that her "holy symbol" was a gold coin with a hole through it, hung on a string: Waukeen, goddess of trade. Well, at least it resolves that tricky plotline for the moment, & "Norin" can go back to being Norin again. The party moves on, with Serafin pausing in the shadows, lagging a little behind everyone...to sneak a mouthful of the dead mushroom person's corpse, chewing on the fleshy matter left behind. Okay...

Beyond are branching pathways, leaving them to decide which to head towards: the sounds of echoing Dwarven, the sounds of choked screams or the rank smell of beasts. Electing to follow the spoken fragments, they find a stout, locked door, now silent...& another side passage, which they decide to follow along down. They can tell that Droki has been using the omnipresent network of cracks, sewers & chimneys (widened by a pack of demonic quasits, according to the fungi) to sneak around & miraculously, rounding into a corkscrewing cavern with a rushing water & narrow ledges, they manage to catch sight of him! & the weird, lurking water elemental, conjured to life by Whorlstone's faerzress, spots them! Ambushing them from the depths & sparkling with the luminescence of cave fishes, it almost drags Pook'cha to a watery grave. Three clicks of his heels & Droki's off at a dead sprint, & the players engage in a running battle with the liquid horror, which appears able to move about from eddy to eddy with impunity. Norin is slammed against the stone wall by it, but she clings on tight & keeps from being drowned, as the party successfully flees from the water's edges, hot on the heels of the elusive Droki. Which is where we will begin next time, with pursuit under way...which reminds me, I gotta brush up on the chase rules. 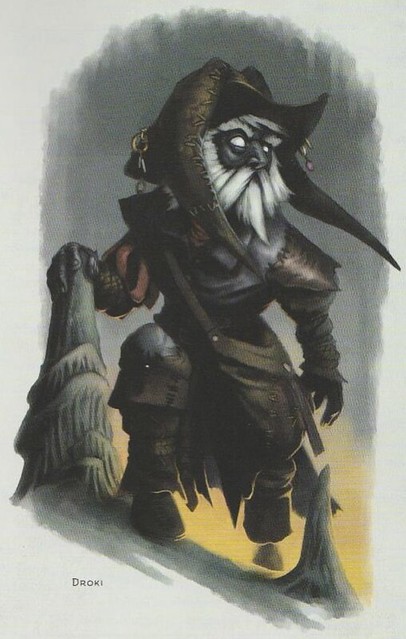