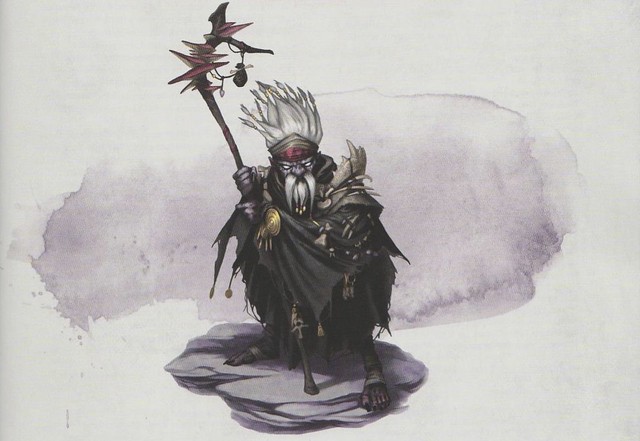 When it comes to GNS theory, I've always found "Game versus Story" to be the central tension. I mean tension in a neutral-to-positive way: creating twists in the narrative by means of lucky or unlucky rolls & creating immersion for a strategic climax are win-win scenarios. There are other stresses it brings to the story, though...like time constraints. The world moves a lot more quickly when roleplaying & abstracted skill rolls are the order of the day, but once the minis hit the map, things become more tactical & glacial, by the very nature of initiative order & formalized mechanics. That's fun too, but finding the balance is the trick, & it is different for every group. It doesn't help that none of us are Rules Lawyers, which means no one is the Rule Encyclopedia, either. I don't mean this to sound like a complaint by any means, but rather as introduction to say: the Out of the Abyss crew have hit a dungeoncrawl, & I'm meditating on my pacing & overall approach to it in the fifth edition, since my only other attempt was the Comet Sessions in #TorDnD.

The Derro Ghettos of Gracklstugh are a sharp contrast to the police state orderliness of the grey dwarf quarters. Now that the player characters have some borrowed authority-- Sam's increasingly aggressive thri-kreen bard Pook'cha as a Firekeeper of the red dragon Themberchaud clad in dragon scale mail & Ellen's elven cleric in identity crisis Norin as a member of Clan Blackskull by way of a belt of dwarvenkind-- & they are allowed to past through the Gates of Moria-like edifices that keep the Blade Bazaar & common areas segregated from the duergar-only residences. A vast canyon first fraked, then mined, then converted into brutalist architecture, Laduguer's Furrow grows ever outward & downward, with the eastern- & western-most directions becoming increasingly more poisonous & unstable with dangerous industry. At each cap are the internment districts of the derro. Second-class citizens, slaves in all but name in a city where chattel laws at least afford slaves protection as property. Our players are headed there; they are looking for the Whorlstone Tunnels to find "Droki" (& trouble) somewhere in the West Cleft. 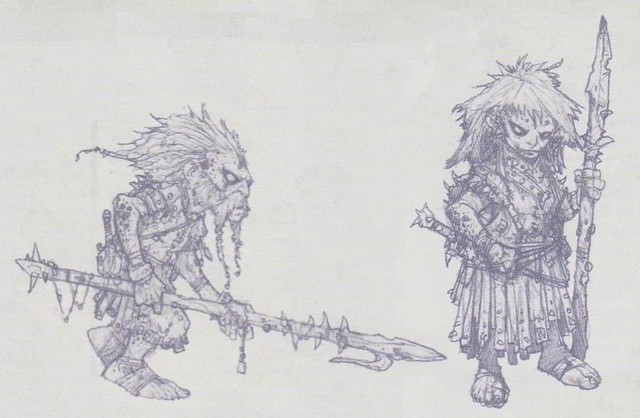 It is a wretched life for the derro. The walls are of the same masonry as the great gates that divide the dwarven city above, but here the doors are bars, neighborhoods wrought as one big cell. The lawful evil dwarves let the derro run to anarchy, taking those desperate enough to come to the gates out in work shifts & occasionally committing violent pogroms to keep their numbers in check. Psychic derro mutants used to be a problem, creating riots & uprisings, but with the cullings the duergar also offered the psionic savants a seat at the council table with the Deepking, easily corrupting them by making them minor oligarchs. As our protagonists scout out the area, they watch the derro commit casual & random acts of violence. The streets are empty enough that the characters think they can navigate them stealthily...& with some decent dice rolls, they do, avoiding the notice of the diminutive & mentally unwell cliques & tribes of the derro. Jumping a member of the Grey Ghost thieves' guild wandering alone, they put the screws on him. Intimidation only seems to be going so far, but Jim's now sisterless drow warlock Imica uses the power of his pact with the fey to charm a lead out of him-- they are looking for signs of disruption in the faerzress, the weft of arcane energy that suffuses the Underdark.

Which of course they eventually find; like entering the Emerald Seer's cavern in Krull, they step sideways into an illusion that leaks foglets of energy, the two-dimensional shimmer of the blacklight aurora subterralis tilted into three-dimensional luminescent wisps. Into esophageal caverns lit by crackling energy corruscating along the walls in spiral patterns, carving-- shaping-- the stone into overlapping helical swirls within swirls: the eponymous "whorlstone." The tunnels range in size & regularity, & in fact Pritpaul's occasionally cannibalistic halfling ranger Serafin (whose last name Threepwood is a Monkey Island reference, not Wodehouse) overhears a madcap little figure down a cul-de-sac mumbling to himself. Just in time, too, as Droki shrinks small & scurries off down a fungus encrusted sewer hole in the stone far too tiny for even the halfling to follow. After some poking about, the map I sketch to give them a purposefully rough idea of their options is reversed & shown to me: the phallic pareidolia is undeniable & we all spend a few minutes in stitches. Skipping the puddle of water, the group heads off down the most obvious passageway. 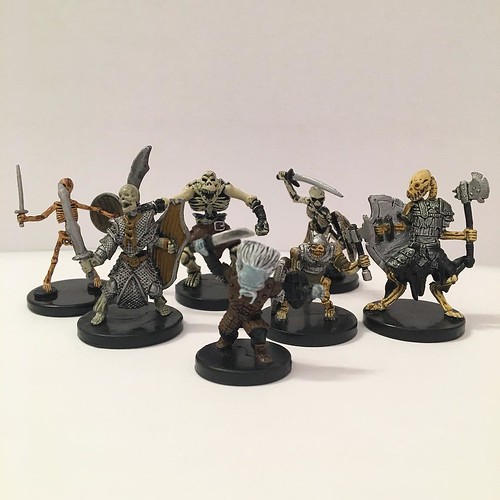 The player characters were originally captured by the drow with a number of non-player characters. Along the way the way they've lost members, both to violent attrition like the drow Sarith to an ooze, but also to a friendly parting, as when they returned Shuushar the kuo-toa to Sloobludop. Their gregarious Lynchian derro companion Buppido helped them get to Gracklstugh safely before eagerly parting ways with the group. Off, coincidentally enough, to the Whorlstone Tunnels, where they find him now in a chamber that reeks of cooking meat, lined with humanoid bones, piles & piles of varied kinds. He keeps his usual jolly demeanor, overjoyed that one of them will be the last sacrifice he needs to unleash his true self, the god of madness & visions, Diirinka! & with that, he somehow raises the six freshest skeletons & attacks. Unfortunately for him, Norin is a cleric & she turns the majority of the undead quite handily. Those that are left, & Buppido, concentrate their attacks on her-- I confess that my personal motto is "kill the cleric first"-- but are dealt with in turn. Upon which point, while Serafin sneaks a mouthful of Buppido's suspicious cooking, a nosferatu-esque gnome ghost creeps out of the floor...& rather casually chats up the party. Pelek asks them to find his necromanticaly animated hand & take it to Blingdenstone for burial, mentioning the "Eat Me" growth & shrinking powers of the bigwig & pygmywort mushrooms clumped about the caves...like the ones by the miniscule tunnel where Droki vanished.

One big upshot of a traditional "dungeon" is that I'm already prepped for next session...
Collapse