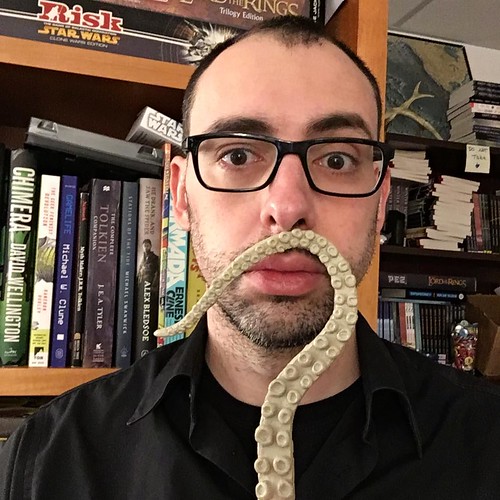 Insert Ennio Morricone & theremins here: it's Deadlands time again! After last session, we'd our characters built & started off as newcomers to the nearly abandoned town of Coffin Rock, a pun on "Tombstone" we just "got" this week. Out to Theresa & Pritpaul's-- the snake handling cultist & the prospector with the Philosopher's Stone-- place in Queens, but got a ride home with Raj, the DM. Uh, "Marshall"? Factoring that in, their spot might end up being not all that out of the way, relatively speaking. Not to mention they went all out on the hospitality. Matt, who plays the crazy mad scientist-- in contrast to my creepy mad scientist-- lives in their building, too, so it's certainly the logical spot.

On our first foray into town my albino character made an appointment with a spooky dermatologist, visited a brothel where we hallucinated images in the mirrors, found a bunch of rotting horses, & generally "got a bad feeling about this." We picked up there, & things didn't get any better. Nests of swarming rats, formerly nesting in the old newspaper building, disturbed & sent scurrying throughout the town, more tangling with the house of ill-repute-- an avenue that was then discarded for being to uncomfortable-- & then! The dance of the mad scientists, as we bumbled into my appointment only to witness the doctor letting a man, criss-crossed with missing patches of skin, die on the table. He wants to blame us, but frankly we steam roll him by science-talking. We end up making a second appointment & coming back later, to have Matt's inventor tied down & given a square of new skin to replace the piece the dermatologist cuts out of him. An appointment we kept, of course. Verdict? He's not a mad scientist at all, just a bad doctor!

Things were kicking into gear when the session ended: the ruins of a haunted house, disturbed plots in the cemetary & sideways shadows, an undead mayor dragging himself from the grave...
Collapse