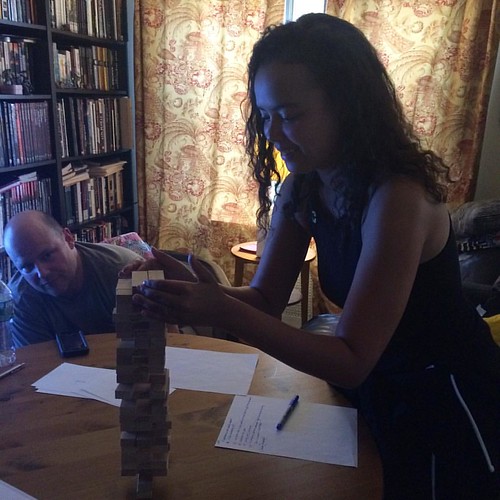 I dreamt too big with my Dread game. Honestly it was sort of on purpose: I thought having multiple weird hooks would mean more entry points to the story, but it just made things convoluted with red herrings. Or not red herrings but slippery eels; following my thought processes via the narrative was complicated by how at-right-angles it was to make a story about a black hole, vacuum point energy, & Alzheimer's medication set in the cyberpunk future. See, I told you I was too kitchen sink about everything. But! my pacing was good, & you know I won't shut up about over-analyzing my flawed sense of timing in most storytelling ventures, so locking that down is a structural success at the very least, & everyone had fun so it was a fundamental win, anyhow.

Backing up real quick-- Rasheem & Jessica are staying with us, but not in Spare Oom because...we've got a giant leak in there. We just got rid of some furniture out of that room, though. Anyhow, Raz & Jess & us went to brunch with Russell & Carol, & then Jennifer, Jessica & Russell all split, while Tom came over. A few other people were supposed to show up but cancelled on account of hangovers & the like; I think a few more butts at the table would have been helpful, because...despite what a hard time I give Tom about nobody dying in his Dread games, the tower never fell. I wasn't shy about asking for pulls, either...I think one more set of hands could have brought it tumbling down. Such is life; no matter how much I try to be hardcore, the characters make it through okay.

Or well, fooled you: nobody is okay! The behind the scenes in a nutshell: The Super Large Exotic Hadron Collider built under the Hague popped the vacuum point energy bubble-- the base state of the universe-- causing a "black hole" & also a tear in the universe rippling outward from Earth. "Black hole" because the very idea of stable physics is decaying, but to an outside observer it was a light-speed event horizon. Trapped inside, the players watch people dissolve into puddles of Kirby dots & Silent Hill beasties, as the sky is black worms, fraying string theory, screaming a steady static. Atoms dancing at the macro-scale, flesh as primordial soup, phones & ansibles as voices to the world outside the event horizon or the horrorshow weirdos within.

I did some neat stuff, I think; instead of pre-made questionnaires by character or a general survey, I wrote categories of person-- Military, Science, Tourist-- & with a variety of custom questions, & then a variety of other categories like Health, Background, Quirk, Drive. "Health" was the MacGuffin; they all had the same Alzheimer's medication, a futuristic treatment involving quantum consciousness that was the reason they were still "people" in the black hole; spooky action at a distance! Strange attractors! Subatomic entanglement! Nobody played a Science background character, though, so I didn't have a good hook for that. There was no outward facing exposition; next time, there should be! Instead it was just a chaotic mass of monsters & decaying reality.

The players went all out with the crazy concepts. Do you know who Lil' Bub is? Apparently I should; Carol's character was a...clone of Eartha Kitt whose "daughter" was a clone as well, both as mouthpieces for the divine feline. Rasheem's character was a soldier's whose medication was giving him flashbacks to the future, & had a plague doctor beak for a nose. Tom? A tourist visiting from the Neo-Victorian terraforming colony on Titan, & a lunatic. Given the weirdo I played in Carl's Dread game, I should have predicted that. I thought about making it explicitly a Shadowrun game, but I thought that would be too, too much for folks unfamiliar to that already plumbing-heavy setting. Still, this strikes me is a good way of modeling any campaign setting you like in a newbie friendly system, since "pulling Jenga tiles replaces dice & statistics" is awfully low fi. (Picture below by Tom.) 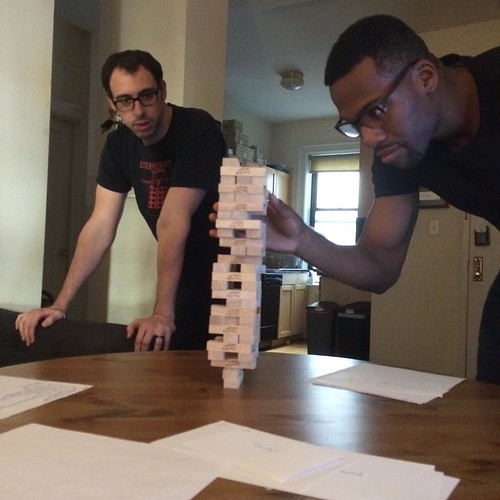