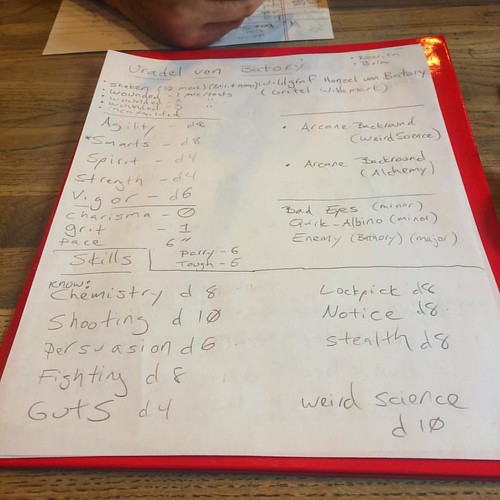 I get to be a player in a Deadlands game! I haven't played in the setting since college, when I played a Pinkerton "Mulder" whose Scully had died, in a bowler hat. This time, well, I wasn't quite sure what I wanted to be. An...alchemist? Don't I sort of always want to be an alchemist, though? Heck, why not! The question I really struggled with was did I want to be a white guy in the Weird West. Could I be research nerd enough to play a Native American character? I decided that the shamanic route was right out, & came up with a mixed-race concept of a snake-oil salesman who claimed to have been raised by his father, a Prussian baron, but who was actually raised by his mother, a Prussian maid. I'd just read Plague of Doves, so the Ojibwa were on my mind; also, I've researched them before so I wouldn't be starting from square one. As were the family relationships; I'm still not sure when the deal with my father is, yet. Then walking over there I had a brainstorm: my character is albino. Listen, it's the Weird West & I like to have an iconic quirk, & it played into my plan perfectly. I made my character part Hopi, since albinism is 1 in 200 amongst that tribe, & I have at least a smattering of knowledge, thanks to an interest in kachinas & such, enough that I think I can be respectful & not appropriative. I'll use Thelesperma megapotamicum infused vodka as my cure-all!

Raj is the Marshall. Theresa is the one who brought us all together; she's the Western fan & her character is a snake-handling Blessed, who was a revivalist in the carnival where I was selling my tonics. Matt wanted to be a Weird Scientist as well, but he's going more of a Tesla route than my potions, & so to diversify the group I decided I'd be the muscle, as well. So...okay then, how do I justify that? My plan was that I played "Prussian noble" as a persona, culled from my mother's time as a royal maid or something...but ok, let's turn the gain up on the Weird. I scribble out the name "von Wildegrave" & write in "von Batory." I mean...right, if this is the Spooky New World, then the Gothic Old World is out there too, I figure. Dracula's got a cowboy in it! So now my mother is the ghoul Black Widow; a body servant of Countess Bathory, the immortal & evil alchemist. My mother was a snatcher, hence the spy skill suite, & maid, hence the pomp & circumstance; she fled to the Americas & met my father here (a non-albino, though in my fictional history my mother was the white buffalo woman). I grab green glasses-- I need sunglasses, per my character's Hinderances-- & we're off to the races in Coffin Rock! Where the creepy dermatologist makes my choice of albinism quite germane! Now I just need to actually figure out how the Arcane Background rules work...
Collapse