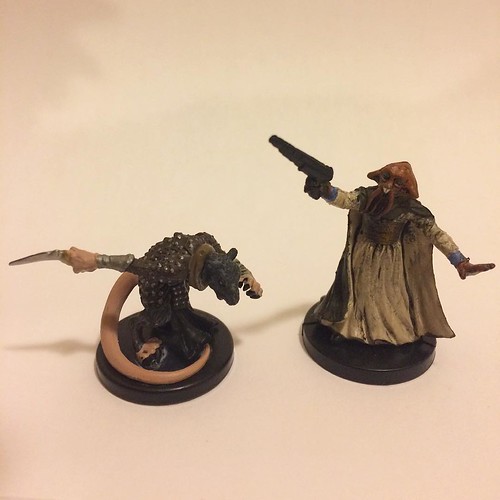 "Can't go wrong with an absurdly avuncular mindflayer," is going on my list of Dungeon Master axioms. It's right there in Out of the Abyss, & that's the sort of thing that made me like the campaign enough to run it. Graziliaxx is a member of the Society of Brilliance, an organization of monstrous humanoids in the Underdark with super-genius IQs who want to "fix" all the problems of the underworld...& who are tangled up temporally with the party somehow? That's just a random encounter I can roll up, & that's to the story's credit. So, the party is traveling along in a kuo-toa keelboat: Ront the orc is a remarkably adept sailor, Jimjar is having an eating contest with the piranha's in the boat's nets...

First, an NPC heel turn, as Topsy, fresh from the death of her twin brother-- a pain Jim's drow warlock knows all too well-- comes rushing towards the party to tell them something...as they svirfneblin's body cracks, bones breaking, white furs sprouting, pink eyes blinking into a feral, lycanthropic snarl. The wererat seems unstoppable...until Imicia knocks her out with sleep. They tie her up...& when she wakes up she transforms into a white mouse & scampers into the bilge to hide, small enough that they can't get at her without squeezing down after her. Norin the elven cleric almost nabs her using a chain shirt as a net, but no dice. So instead, they keep watch on the grates leading in & out, & sail along.

(Meanwhile, the madness of the Abyss is starting to take hold of all of them.) 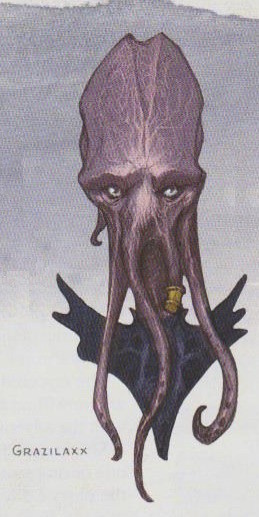 It was my call to play it as a mad uncle. It's a mindflayer that isn't evil...done as the "benevolent" colonial anthropologist. Grazilazz will squidsplain things like human sexual reproduction to you, but the relief in the face of seeing a Hasturian figure, a tentacled humanoid flying limply through the air, boneless limbs more like tentacles than arms or less, long "fingers" themselves even smaller cephalopodian appendages, & not being eaten by it. Really takes the sting out. Robed in purple, clothed in a sphere of violet light, it hoveringly darts willy-nilly above the cold waters of the Darklake telepathically shoulting "Haloooo!"

"Haloo, scion of DeVir," in fact, & as the thri-kreen bard Pook'cha knows, Imica is of that lineage, revealed long ago by Kalythra, Imica's missing half-drow half-sister. A small family secret-- the name of the House his father fled to the surface to escape-- suddenly germane. They draw the attention of the illithid-- who carries a lightning gun like the one the grell possessed, that the sea-sick (& PC absent) Serafin the halfling ranger now carries-- who oddly & gladly bobs over. 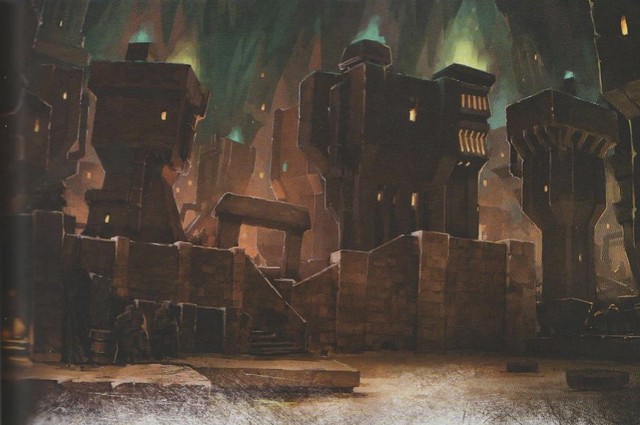 Grazilaxx, a super-genius, brought goggles of night for Serafin, the only character without darkvision. Realizing that Gizem the dwarf & Cavendash the gunslinger aren't with the party, it fears "Temporal Con-tinuity Edits!" if it talks too much about how it knows who the members of the party are, though it lets a few things "accidentally" slip, like wanting them to get the stonespeaker crystal & telling them to avoid anyone asking about "Cyrog." The reason it was looking for "DeVir"-- a House wiped out by Do'Urden, but Grazilazz seems to struggle with the idea that the House & the individual are not interchangeable-- is to tell him that Eilistraee (!) has a message for him, that She's left his House's moonblade with the "eldest of DeVir."

A real swell Thing, Grazliaxx talks while towing their keelboat towards Gracklstugh, the grey dwarf city where Buppido the derro has convinced them to go...largely because its Somewhere, as opposed to the middle of the Underdark or a creepy fishtown. & because if Demogorgon comes out of the Darklake again, at least they have armies & a red dragon. The mindflayer parts ways with the party just out of sight of the city, knowing his appearance might be problematic, warning them about the vrock called the Queen of Fleas, servant of Yeenoghu, who they've encountered twice before.

It leaves, & they paddle: Buppido knows a dock where they can avoid any trouble at the gates... 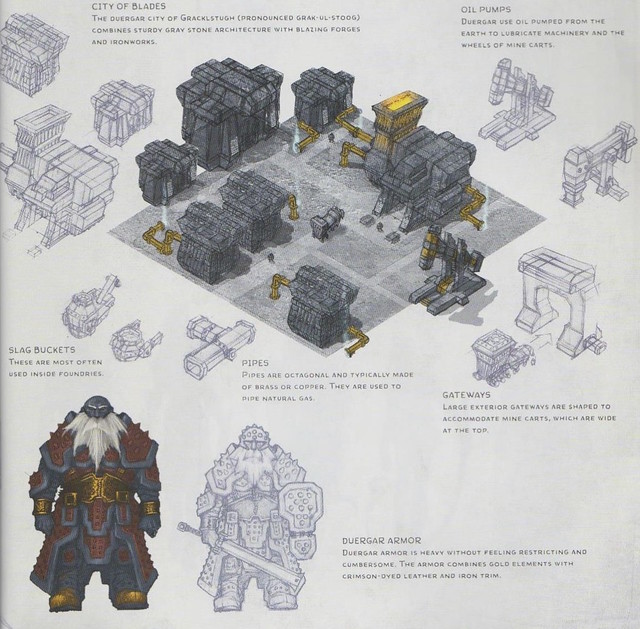 So, Gracklstugh! Part Singapore, part oilfield-factory complex, the plumes of smoke & bursts of intense flame are contrasted by the spotless, almost empty streets. Empty...except for all of the invisible dwarves, that is. Duergar are the "drow of the dwarves," a cold, ruthless, efficient race that can grow to be giant sized, turn invisible, loves spying, hates lawbreakers & loves making stupid laws to catch people breaking, like "no haggling." The party stays at an inn called The Ghohlbrorn's Lair-- "We Are the Only Establishment Legally Allowed to Serve Non-Dwarves" is their catchy slogan-- Jimjar starts to gambling with treasure he looted from the Netherese temple. Buppido agrees to lead the party to the Blade Bazaar before he parts ways with them, & that's where we call it a session! Music was provided by Makeup & Vanity Set's "Charles Park" II & III. 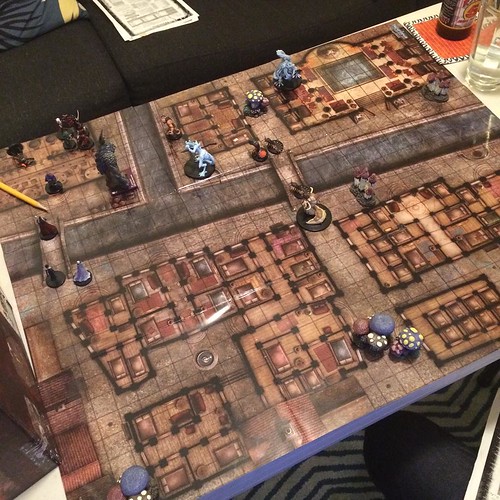 Not that much to really say in recap of the last Oubliette session; in defiance of most of our game meet-ups, this was pretty much all in-initiative! Not combat, but stealth. Frankly, that's even better in my book; either way, it was a largely tactical episode. Last time the castle-town was over-run by the toxic spores released by the Monkey King's priest, who activated one of the ancient Al-Kem weapons. An anime plague of biblical proportions. The players found their allies mutating, twisted into insectoid monsters & giant ogres, frenzying & really doing a number on the group. Exiting the chapel where Haru & Iroha have just been married, they see that ground zero was in some ways the eye of the storm. The city lies covered in alien coral, scampering toadstool oddities, spiderwebs of fungus; strange, silverfish bugs, horribly twisted people, all manner of horrors. 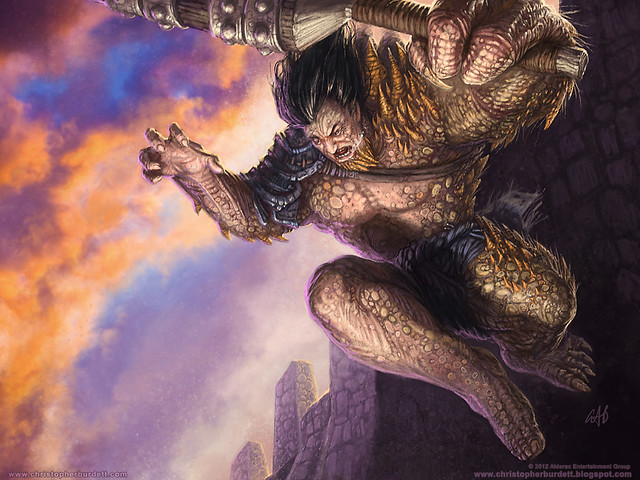 Flitting from building to building, jumping across the long drop to the canal below, our "heroes" take the long way around...& see a huge, Lugh of the Long Arm looking fomorian figure. O shit waddup, it's the tumerous, harlequined bodyhorror giant that used to be Hokusai Nezumi no-Kappa! & also from the auction, the beautiful courtier Toku o-Kirin & the assassin Masui...& they are with the enormous Kaori o-Foo, whom Amina is meant to duel to the death, after the wedding. The wedding that just finished. The party hides in a warehouse, breathing heavily through masks. Outside, the "other party" try to reason with their warped friend. In the distance, the sound of strange engines: a heavier-than-air ship! 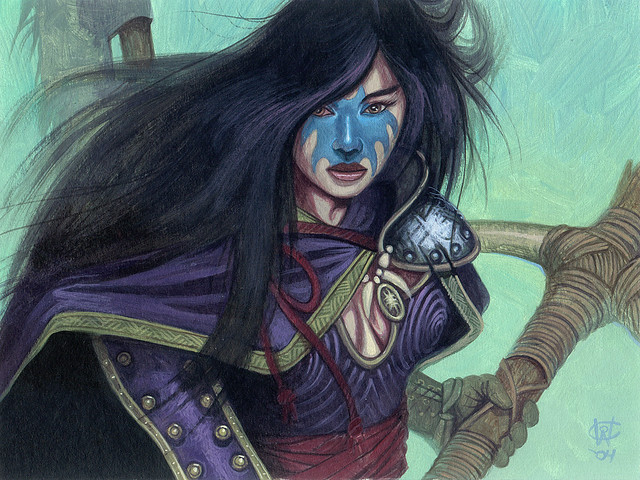 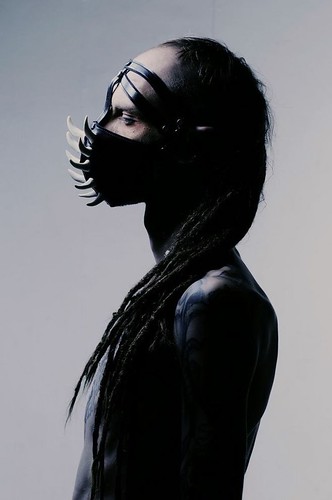 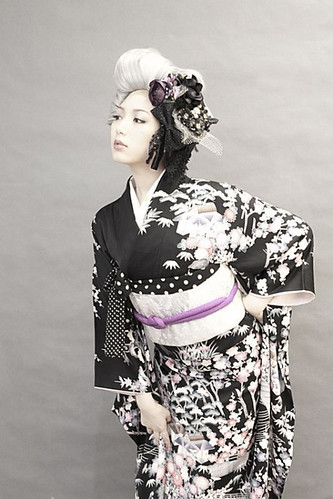