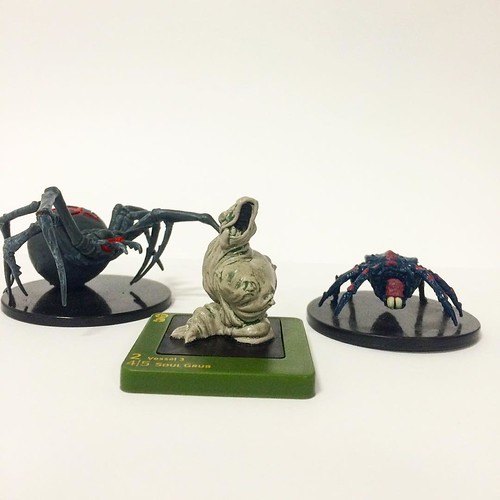 Last session ended with the played resolving to: run! This session, they had to relearn that lesson. The pacing didn't quite come together, but like Sam said, I was inoculating them, adapting them to my play style. Encounters are not balanced to be won by mathing them to death, the game mat doesn't always mean combat, NPCs can be unreliable-- things that can be taken for granted, once we all share a vocabulary. Still, when I whipped out that map at the end & said roll for initiative, the story slowed to a crawl. For clarification: I think the session was quite a success, especially by the "did we have fun" token. Actually, by any standard: only one dead NPC! I set out to establish that the Underdark is scary & difficult to survive in, & I think I sold that. Just always (over-)thinking about pacing, trying to up my game.

It was a close shave. The session started with them fleeing an overwhelming drow force. The "plan," such as it was: jump to the webs sixty feet below, climb across them to where they hang over water, then drop a hundred feet further...then make a break for it. Alicia's half-drow rogue Kalythraa is first over. My plan with the NPCs has been to distribute them to the players as back-ups & side-kicks as relationships formed. Kalythraa adopts the myconid Stool, keeping it real, who goes over with her. Pritpaul's halfling ranger has bonded with the elf-turned-quaggoth Prince Derendil. Sam's thri-kreen bard & the orc Ront are pals, & the dwarf cleric Norin played by Ellen ends up simpatico with the svirfneblin twins Topsy & Turvy. Jim's drow warlock Imica hasn't found a pal, yet, focusing on his sister's safety. Jimjar, the deep gnome, & Buppido, the derro, are making a break for it across the webs; they were the first down.

The players in this campaign have not had much luck with dice rolls, with two notable exceptions: Constitution & death saves. We started the session with some NPCs & Kalythraa down in the webs, but the rest of the PCs hesitating to jump, as they've seen monsters below...notably, giant spiders & oozes. (On a sidenote: I shouldn't've let them see the ooze, & should have only let the drow see the spiders, as the webs & the floor were out of the light & out of people's darkvision. I've been pretty good about optics; only the halfling cares about light, & he's mostly been stuck in dim lighting, then I have to factor in that the drow has darkvision out to 120'. I retconned it to the webs being 60' down & the floor 100' below it, which actually ended up being a good way for me & the players to figure out how it worked.) Getting bum rushed by three quaggoths from the pens & two more drow from a watchpost helped convince them to...jump!

Here's what Inspiration Points are for, in my experience: the same thing as Vices in World of Darkness, or Burning Wheel traits, or Character Traits in Oubliette. Rewarding players for screwing over their characters. To wit: down in the spider webs, at the beginning of every turn you need to make a Dexterity or Strength check. Your humble Dungeon Master can let things like that slip. If you remind him on your turn, he might just toss an Inspiration Point your way. I think the rules on being restrained worked, but making it double movement as well was a tough mechanic, since it was a whole area of it. I think I made the area just the right size; any bigger & it would have been an annoying slog instead of a dangerous complication. & when I say "restrained worked" I mean, a whole bunch of PCs ended up wrapped up in spider webs.

If it wasn't for the two natural 20s on Death Saves, I think the party might have been headed for a Total Party Kill. On one hand, I was ready for it: if you are TPK'd by the drow & their pet spiders, you end up...re-captured by the drow! On the other hand, I was frantically brainstoming ways of doing that without frustrating the PCs! Academic, though: two solid dice rolls & friendly NPCs turned the tide. You roll a 20, you come up with 1 HP, & that was just what they needed. Serafin the ranger was out the whole time, which is a bummer, & PCs went down & stayed down thanks to paralysis & a lack of spells...but letting the players run their pet NPCs helped with that, & in the end I think it was a good combat. The ooze in the water? Sarith the drow & it were lost in the dark, in a frenzied of blasphemous Abyss: "flesh for the Faceless Lord," burbled the slime, while the drow buzzed "Zgggmmmyy!" in a suicide attack of ecstatic seizures.

A cut rope bridge later, & everyone has a chance to talk. The Underdark natives discuss where to head to. Neverlight Grove seems to be a popular eventual destination, & Gracklstugh as well...both of which are on the Darklake, which would be navigable by the pacifist kuo-toa Shuushar's brethren in Sloobludup, so that's where they are headed. How long will it take to get there is a complicated question, as none of the natives really understand what days are. A week or two? If nothing terrible happens. Hey, they are lost in the Underdark, what could go wrong? They just barely roll well enough not to starve or die of thirst, thanks to a lucky find of these things like a cross between a moray eel & a banana slug living sessile on the wall. There followed a bit of a decompressed "survival & salvage" segment, all while covering their tracks from their drow pursuers & scouting for dangers. 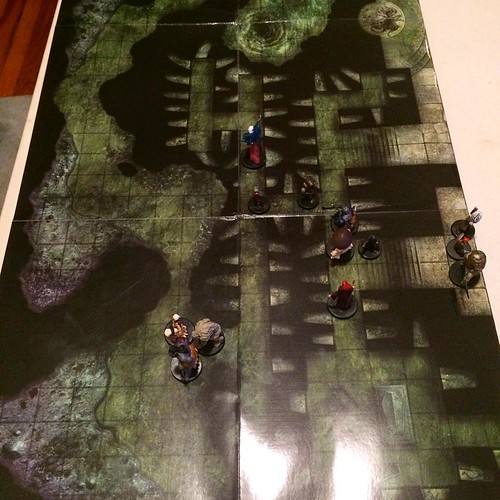