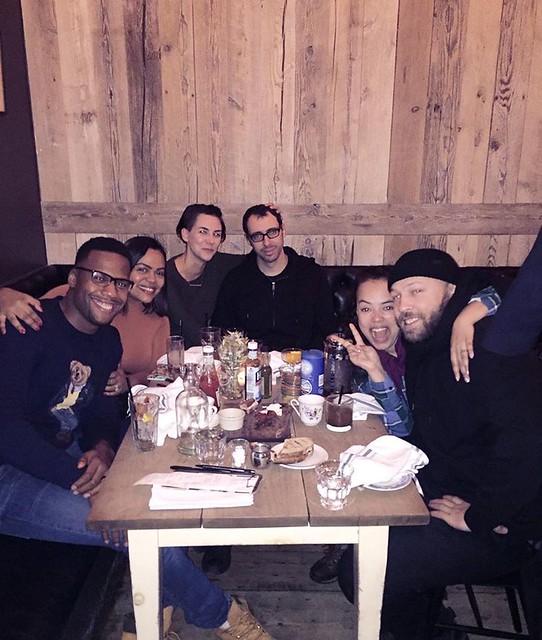 Valentine's Day! We got together with Rasheem & Jessica & Russ & Carol for brunch for Phase One. We went to The Wren, which has a whole Bloody Mary selection. Normally, I want a sip of a Bloody Mary, & that's it. I was talked into getting their...Beef Shot? Something like that. It was a non-tomato based Bloody Mary, using a beef broth. When I was in the Arctic I got an alcoholic beef broth drink that was awful, called Reindeer Piss, so I think now with Try Two that I can comfortably use the heuristic that meat cocktails are not really as good of an idea as they sound like in theory. Nice to see Jess & Raz, since they live in Florida Man now, but you know what, Raz has been solid about telecommuting in for Eleven-Books Club, & we all troll each other online enough, that is hasn't been a huge distance bump.

Speaking of book club, as an aside, last night was Kuba's first pick, The Girl on the Train. Consensus seemed to be a positive meh. There was some discussion of the role of "stress" in fiction, especially leading up to the meet-up, since I don't like stress. Not fear, not horror, I don't like drama or dramatic irony or maybe suspense? This is separate from my "I don't really like horror, I like the macabre, which is different but related," & is just that...I have stress in real life. If you successfully evoke stress feelings...why do I want that? Also, what Shauna called the "Bond Villain" exposition at the end was widely condemned. Still, entertaining enough, though I was the only one who liked Anna, as I predicted. After the meeting, a bunch more people came over, & we stayed up late playing board games. I played Battlestar Galactica, which shares the over-complications of games like Arkham Horror, but I was a cylon Gaius Baltar, & with cylon Starbuck's help, I won, so there's that.

Oh, speaking of the Arctic, went to Liz's birthday party the day before Valentine's, & I got more use out of my thermal underlayers because dang it was pretty cold out. I actually thought it was going to be worse; the mayor issued a serious weather advisory & told people to stay indoors...but well. I don't usually want to be "this guy," but I guess growing up in the Wasteland I learned to take weather advisories a little more seriously, because if you got caught out in a freezing blizzard or a tornado, you could be in real trouble. This was just a little Real Winter. Not to say it wasn't cold, because it was, but that's all it was.

After brunch on Valentine's Day, we went over to Matt & Kat's & hung out with them for a bit. I haven't seen them in a while, both from me being antisocial, the weather, & a bit from them being out of town on weekends. We hung out there for a good long while & then came home, where out of the blue we got into an argument about...me not reading the book club book fast enough? Not the best capstone, but I gave Jennifer a card I made with a picture of Kylo Ren looking at Darth Vader's helmet saying "I don't want to be Solo..." What else is new with me? Things have been going pretty well at work, we're being thought of when award nominations roll around, which is vindicating. I was going to say flattering but forget that, the books rule & we worked hard to get them out there. What is today, Sunday? The apartment is pretty much cleaned-up & I don't think we're getting Olivia today, so maybe just a lazy day today...
Collapse