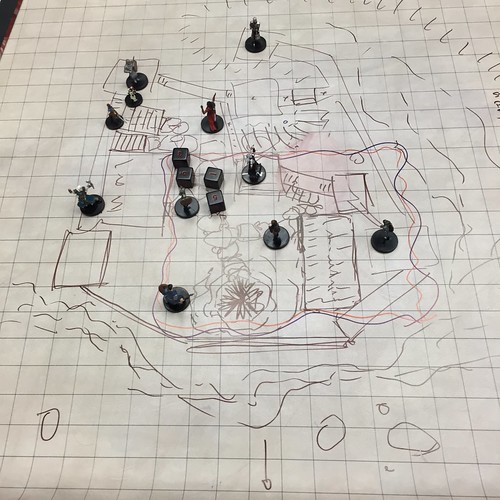 It read like a Russian faerie tale, or a medieval "a blank walks into a bar" joke. A jester, a troubadour & a pilgrim show up at a hidden bandit fortress, somehow talk their way in, & then they vanish in the middle of the night amidst a confusing flurry of illusions, invisibility, & other worldly colours from space...with that kid the bandits had kidnapped for their demonic overlords. That's right baby, #TorDnD is back, & for the moment Jonathan is taking over from my Comet Days arc, & Tim is going to keep playing the bard he played when I was Dungeon Master. Which is great, actually, because it was established that he knew my tiefling magic-user, Pantalone, so we started with an easy partnership. Speaking of witch, I rebuilt Pantalone as a warlock, as per my original idea for the character. For my backstory I'm using my trademarked "Macabre dell'arte" for my pact, which I will elaborate on as it becomes germane. Sadly, Irene & Bridget are on hiatus for the foreseeable future, & Scott couldn't make it. Carl was there-- we re-built our characters over lunch-- & his cleric of a trickster god made three.

Pantalone's not all there, but not many people besides his adopted daughter & Bridget's character Columbine seem able to parse the act from the haywire. When this guy starts going on about his kidnapped daughter, I'm suspicious. But then, I'm always suspicious; I'm going, I'm just not convinced this is true or real. The comet has melted, & they are saying the water is doing weird things...like making people lucky, or mad. This little girl was mad, & they were on their way to the nunnery where they put the insane, or cure them, & then bandits grabbed her. Okay? We do find bandits, some pretty exceptionally disciplined bandits, some pretty well armed bandits, living in this keep that's been left overgrown & mossy but is pretty well buttressed, pretty well defended. We sneak around the long way & come at if from the opposite direction of the city, walking openly towards it in the twilight.

How do we manage to fast talk our way in? Well, by claiming landsharks-- real, remember, as this is fantasy-- chased us here, & that the doddering old (disguise self'd) pilgrim was no help either, getting himself lost. But you know, if you help a religious pilgrim, you get a blessing, so we helped! Hey, can you help us out by letting us in? It didn't hurt that Tim's character is an actual bard & my character is an entertainer (jester) by background. Nor did the big Deception & Persuasion rolls hurt, those helped a lot actually. My invisible, flying chicken-- yeah, I have one of those, it's not as silly as it sounds-- scouted the place out, we identified where the little girl was being kept, & boom, we were in. Not in-in, as they only said we could camp down within the walls, & had to avoid the structures, especially the creepy stables; so noted, as was the giant pyre or signal fire on the hill. The food & drink they offer us is drugged! & they come in the night with cudgels & ropes for us.

Luckily the bard Stavenham makes his save & casts lesser restoration on my warlock Pantalone, who turns everyone invisible. The guards are...surprised, to say the least. Suddenly the pitch-soaked pyre goes up-- thanks thaumaturgy-- hopefully ruining the timing if it was a signal fire & creating a distraction...as do all the minor images we are throwing around. Diabolical hounds from inside the main lodge based on an overheard snatch of gossip, a figure writhing in the flames, that sort of thing. The little girl seems to have powers...true sight, expeditious retreat, who knows what all. She also seems child-like in the extreme, amnesiac to a point of delirium. Domin, the cleric, throws up the poison & starts shredding guards with swarms of spiritual guardians, locust-like coins going old school piranha. It's only after they release the literal hell-hounds, & their infernal looking keeper. We weren't sure if they were wicked or if it was just a misunderstanding-- hey, Faramir rolled like that-- but that clinched it. Invisible-- still, or again-- & with Pantalone revealing a massive hyperspace cube, a non-Euclidean three-dimensional representation of a seven-dimensional object AKA a hypnotic pattern, the party escapes. A featherfall & we're up & over the wall.
Collapse