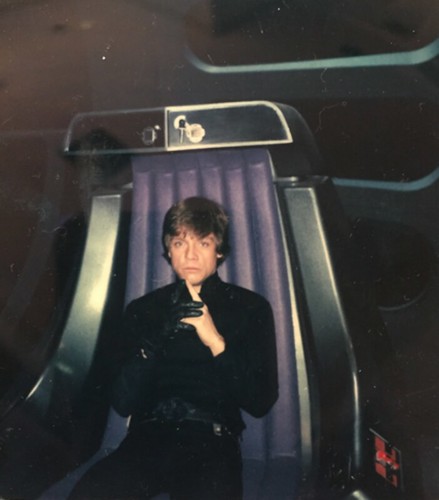 No spoilers, but I will discuss elements of the movies below, stream of consciousness.

I think the First Order is incredible successful at making the fascists be a bunch of infantile pricks who you immediately want to strangle & punch repeatedly, unlike the pretty friggin' cool Empire who are pretty much the coolest cats in cool town. Tantrum throwing Kylo Ren being the exception, being everything Anakin should have been. He's such a petulant godling, he's such a better embodiment of the sulky angry thing, & making him a Vader fanboy is absolutely perfect. Also I want all of his clothes so bad. Not like the mask or anything, just all the sweet capes & robes &...obis, I guess, & shit. I was really surprised by all of the characters! Poe immediately won me over with his "who talks first, do you talk first or do I talk first?" bit...& woah, that frozen blaster bolt was really the statement piece of the movie. I feel like it really set a technical & tonal level of what to expect from the special effects, a new vibe using the old elements. Finn & Rey's instant friendship is a wonderful inversion of the expected cynicism. Old characters aren't over-relied upon & are important to the story, not extraneous. Starkiller base was kind of meh, but then, the Death Star II was kind of meh. BB-8 is just plain swell & you already knew that.

Alright, now it's probably spoiler time. I feel like it's not a big deal?

So I was...probably half wrong about my prediction? Half. I thought it was going to be Rey & Kylo Ren as the Solo twins, with Kylo Ren as Luke failed apprentice & Rey as the one he abandoned in order to not go down that path. Or that she was not "Force-sensitive" & she was up to something. I sort of think she's Luke's kid, now. Obviously "No. I am your father" is a line they have right there, set up & waiting. Right? Not that I mind: the movie is not coy or built on twists, the story is right there, just not all revealed.

I suppose this is probably a real spoiler, or at least, I wouldn't want to know.

So I totally bought into the assumption that Finn was the "Force-sensitive" one. & I'm not convinced he won't be at some point, but that's definitely not what this movie was about. The moment I decided I liked Rey is when she yelled at Finn for being on the Hero Refuses the Call part of his monomyth & then goes into the basement to a literal call & is like, I for sure refuse this shit. She kicked a lot of ass without Kicking Ass™ & that was great, but also the way her climbing is important to the story? Because finally someone learned to climb-- all important Star Wars crap is build over a giant pit. That's standard. The Starkiller planet was not that interesting but it gave a nice backdrop to Solo's swan song.

I was worried Chewie was going to die-- in my head, Star Wars is like, a weird century for Chewbacca, but like, this is a blip on his radar. Dude's 900 years old. I'm partly convinced he's the modern Bigfoot-- & I sure hope he doesn't. I also thought he might lose a limb. I was waiting for a limb! I thought I saw a Skywalker Hand® fly off there, but no...I'll keep waiting though. I thought Solo was a gonner for sure, & I was really worried about the Falcon...but now I think she'll be iconic. I was positive Kylo Ren was Leia or Luke's kid, probably Leia's & probably Han's because it would be kind of a cheat on their romance not to do it. If Rey is Luke's kid, like I'm now thinking, I wonder what the mother's story will turn out to be.

What the hell is the deal with Snoke? The obvious theory is clone of Palpatine, but the mention of a "first Jedi Temple" makes me think there could be some "ancient evil" deal going on. I kind of hope that dude is like, just actually a giant though, by the way. I am curious about this vision of a whole crew of the Knights of Ren. I liked the visions, I thought it was just the right amount. There's a lot of mysteries in this movie! I wonder if Captain Phasma will like, seriously be a Boba Fett, who mostly just looks cool but doesn't do much? Also, how did that piece of crap General Hux not at all get murdered? Ugh, he's the worst! In a good way, in the way where we are supposed to hate that guy.
Collapse