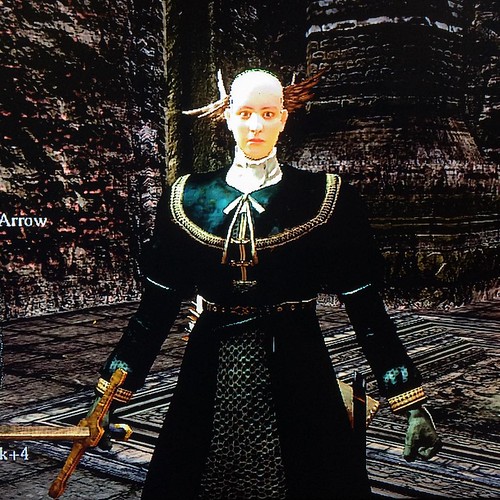 They say the magic swordsmen of Vinheim base their style of Magic Weapon, & really, that matches how I best like to play the game. Balder Swag Sword for scrubs, Soul Arrows & Spears for blasting bosses, (Crystal) Magic Weapon for duels & minibosses. I usually go Intelligence High for that reason. I like to have a bit of armor, but this time I'm going lighter than I usually do, at least for now. For a while I was rocking the Elite Knight & Havel's Ring, & in the future I might gravitate towards the Dingy Set mixed up with the Favored Set, but that's getting ahead of myself. My first build was a heavy in Elite Knight with the Wolf Ring, & now I've called back to that; what I want most out of armor is poise, so I've gotten rid of Havel's & replaced it with the Wolf. (I didn't take The Old Witch's Ring!)

The Real Dark Souls is Fashion Souls, so let's start there. I'm keeping it old school with the Sorcerer's Cloak, but taking it up a notch by wearing the Black version from Sen's Fortress, 'cause I'm fancy like that. Right now I'm going through the Oolacile DLC, so I'm feeling very "on point" with my Antiquated Dress & Crown from the Dusk Set; the Crown I wear for the magic boost, but mixing the Dress & the Cloak up makes me think I'm a Vinheim magic swordsman with a fancy for the myth & truth of Oolacile, even though I don't use their spells; I'm more of a cutting edge Crystal Caves kind of gal. I buy up all the spells; I'm a wizard. The Eastern Gauntlets seem an odd choice, but they look nice & give me 2 points of Poise, which puts me over a Poise Break. Anyhow, all I've got left to do is take down Manus & then Gwyn & I'll move on to a New Game & do the opposite of things; let Lautrec live, save Solaire.
Collapse