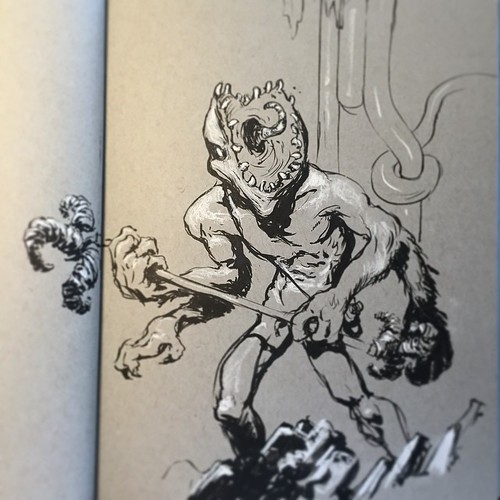 My favorite thing about this session of #TorDnD was how effective Tasha's Hideous Laughter was. Not just because my PC is an enchanter, but because of the provenance of the spell. "Tasha" is the "daughter" of Baba Yaga, Natasha. It's what name she used in Castle Greyhawk. Later she went by the name...Iggwilv. My homegirl! Then there is the fact that gugs appear in the same Lovecraft story as nightgaunts, those weird ticklers, so incapacitation by horrible, horrible laughter has a meta-consistancy to it.

Two things happened in this session: one, they very carefully avoided some pockets of green slime, the corrosive ooze only causing some terrible caustic burns & destroying a shovel & a scabbard. Lots of tip-toes & a rope strung across the middle of the cavern & the occasional pratfall. Veins of slime, dripping up, gravity haywire. "Is the slime magical?" they ask? Well, "magical" in the sense that it is acidic anti-grav slime, sure, but magic as in, can you cast dispel magic on it, no. Sorry. Still, they get across, though possibly after making it more difficult than it really needed to be.

The rest of the session was a big enjoyable brawl. The tunnels & tubes of green slime in the ice culminate in H.R. Giger-esque pipes & tubes in another spherical room. In the center is something like an iron maiden, against one wall is a transparent cylinder like the two they've seen already, one on top of a juryrigged golem's head with a brain in it, one empty & with a brain in a web golem. This one has something white & feathery in it, whatever it is. & then also in the room is...a giant, hideous creature with a gnashing vertical grin & four arms, swathed in that creepy yellow fog. 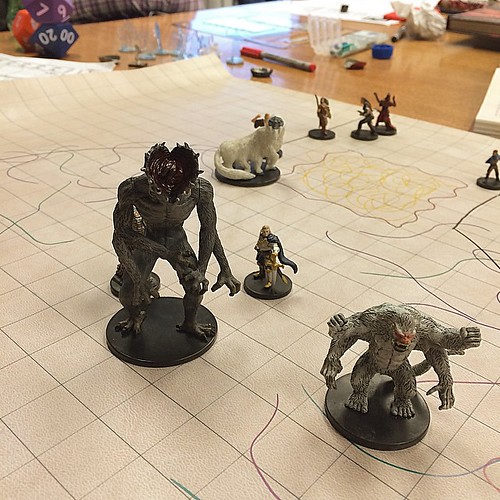 The fight with the "Gug" is joined by another pair of white, four-armed apes with narwhal horns & a fuzzy mammalian centipede creature the size of a pony. It's really the center of the whole conflict & I think it went pretty well! Folks were getting torn up pretty badly, there is cloud kill lingering everywhere, folks are getting chipped away & just when they think they've got the Gug cornered, it teleports across the room. Luckily, as I said, the bard puts the laugh track whammy on it, which lets the rest of the party mop up the support. A few failed Stealth checks later & some of the party see into the next chamber, where a green & yellow filled glass tube is cracking, oozing, covered in...eggs? 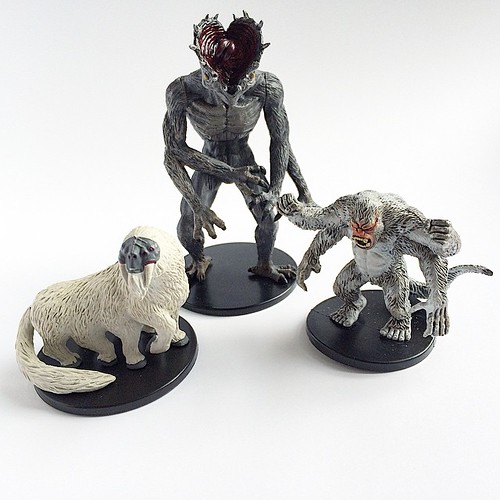