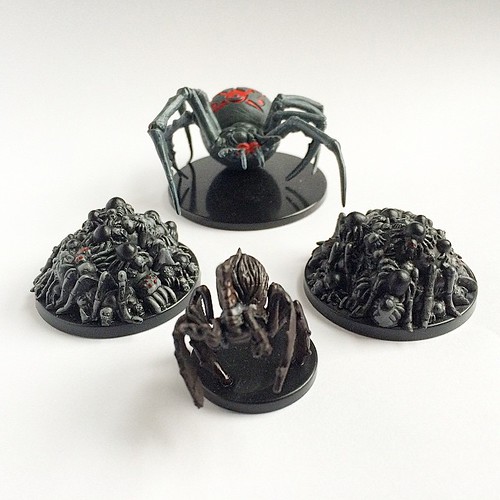 First day of work at the new job, & I stay after to guest DM #TorDnD. Was hoping to tie it off after this session, but I under estimated how long a "ha ha screw you!" monster fight would take, & we started late & were a little more fun & social & a little less focused & slaying. Tim seems to be enjoying the vacation from DMing, so I don't feel too bad, but my plan wasn't to hijack the game this long. I'm having a lot of fun & learning a bunch about the system & it's quirks-- & how group & DM dynamics change-- so it works for me, but I will be happy to get a chance to be a humble player again, when we finish up the Comet. Pantaloon, I'm coming back for you! So, we had our laughs & our pizza & our beers & ciders & smashed some critters.

First thing first, the players went back to the Cynidicea Marjan's chamber to take a long rest. To peel back the curtain a little bit, I have a "what happens after a short rest?" & "what happens after a long rest?" logic to my monsters & NPCs, but they were wise & retreated to a safe place, Marjan & her pet hook horror Watson having offered them refuge in her igloo. They spent the night & returned to full fighting strength. As a side note: my favorite alternate rule in the Dungeon Master's Guide is to redefine a "short rest" as 8 hours & a "long rest" as a week. That keeps the class balanced, as "long" & "short" stay the same proportionally, but ratchets up the "grit" in a simple, elegant way. Not that I used that rule; just admiring it.

The conflict of the session is in a parallel to another star-shaped chamber, & in the hallway leading up to it. It is a "jerk monster" fight & I'm happy with how it went down. The "main" monster was a neogi, for which I just used the stats for a succubus. I mention that because a) it was a very successful reskin & b) a successful playtest of the succubus. A+, would charm again. The neogi enchants Kal-Ra, Scott's monk, & a little glorious "some harm, no foul" PvP combat commences. Later, the alien thing-- oh, a neogi, that's like a wolf spider the size of a large dog with a moray eel for a head that loves slavery-- puts the brain-whammy (the succubus' enchantment easily mimics the neogi's psionics) on Bridget's tiefling rogue Columbine, too.

Jonathan's paladin Aegwyn breaks one of the spells with protection from evil, & Tim is Mister Support as the Bard Satinsheets. The mate of the phase spider they fought earlier, & swarms of phase spiderlings, little albino babies, take it hard; Wren, Irene's human ranger, puts down the phase spider with bolts between the eyes, eyes, eyes, eyes. Carl's weird cleric Dolmen goes into a gate into the Ethereal & uses his spiritual guardians to kill the egg sacs of the phase spiders there. Oh that's right-- this room has stable portals, not spewing out semi-toxic fog. It also has a control column, like the one chipped out of the ice in Went & Alia's room. Playing with it, the neogi shoots a jet of toxic tear gas at the group, at one point; it also poison's Columbine, which the succubus' kiss also neatly duplicates.

It is a good fight; the monk goes down hard, two PCs fail interesting saves, the players present a range of interesting solutions to fun problems. Terrain elements were a factor but not as much as I thought; "webs" are not much of a challenge for anyone other than low level players I think. I used the "collapsing ceiling" trap & it was part of the attrition that took down the monk. The pieces came together naturally without needing any edges smoothed, & for the whole adventure the re-skins have been big successes. I hope that with a little elbow grease we can get the comet sorted out next time, & then I'll give a better post-mortem of the whole thing: I know some people hate to have the illusion shattered, but others like to look under the hood & tinker.
Collapse