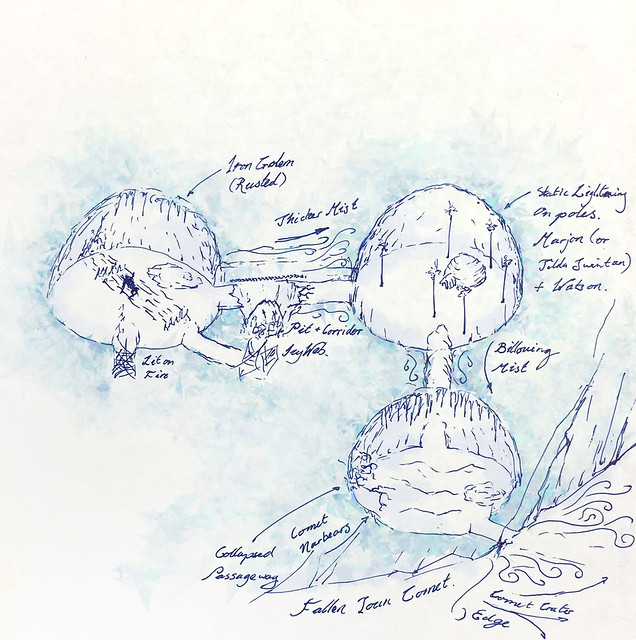 To be honest, for #TorDnD, I was worried about my usual curse, over-preparing! I can't help but sprawl & build outward, & learning the pace of a group is hard. The good news is, no worries! The pacing is pretty alright. Oh, so I asked Tim the other week if I could have a crack at DMing 5e as guest spot, & he said "actually, the trail is about to go cold on the PCs, wanna jump in next session?" & so I did! Over xmas I ran a game & TPK'd everyone right out of the gate, first fight. This time I did the math to balance the encounters, though now I'm starting to think I may have gone too far in the other direction. Six fifth level characters are dangerous as heck, & spiritual guardians is a pretty potent spell, as I was warned. It seems broken but I don't have enough sense of scope & scale to really say for sure. Also, I was a little too "third edition" with the monster's multiattack, which is a rules error I will not make a second time! So I lugged in my books & minis though the slush! There was a discussion about rescheduling, but we were all too gung-ho for that! In fact staying late actually worked out; the rush hour trains were apparently a disaster.

Ioun's Tear is a comet that passes in the night sky every 55 years, except for the times when it...doesn't. Every so often it skips a cycle, or so the long-lived elves say. I broke out DC 10, 12, 15 & 20 Intelligence checks for Arcana, Religion, Nature & History. Note: that was stupid, why did I do that. It's not like I didn't tell the PCs in front of all the other players when they made their check. The Tear of Ioun is an omen sacred to the Neutral goddess of knowledge & prophecy, & when it comes near the world just starts having more ioun stones...& abberations & warlocks. The ethereal boundary weakens & elemental cold strengthens; there have been reports of a acid rain, jewels falling from the sky...& they say the critters of the underdark wriggle up when it draws near, like worms after a heavy rain. Some sages-- the wisest-- say that comets go around the sun, & that this one passes through the dark bodies far beyond the planets, & sometimes slingshots off, even farther. Archmages say it is a hoard of ioun stones kept by the Ethernaut, either the child or creation of Ioun. I put Fantômas' Delìrium Còrdia on repeat, & we're off.

I set out to make this a very classic "Dungeons & Dragons" adventure, but then I veered into weirdness almost immediately. Sorry folks, you can take the Dungeon Master out of the Oubliette, but I guess you can't take the Oubliette out of the Dungeon Master. That's fine, plenty of room for oddity in the game! Tim sat it up with a mardi gras festival to celebrate the comet, & then all the players were lovely little ducklings who were like "oh, a star fell? We all should go check it out." Thank you, adventurers for adventuring, sometimes prying folks out of the inn takes doing. Not this time. Stavenham, Tim's bard, already knows the omens of the crashing comet-- so does my tiefling wizard, exit stage right pursued by ape-bear. Or more like enter, since the party concludes that he went into the comet. Wait. Crashing comet?! Oh yes, & Aegwyn the paladin with his spyglass-- I told Jonathan it wasn't useless!-- saw the comet in the sky coruscate with the colours of the rainbow randomly, then fuzz, exploding into...fragments, one of which just coincidentally lands right outside of town. Carl's cleric of the luck goddess loves coincidences, & he & Aegwyn buddy up as holy gamblers, crowing. 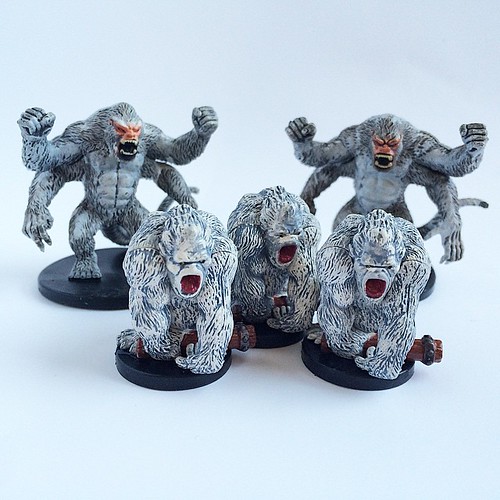 The sliver, a chunk of an iceberg smashed into chunks, is six avenue blocks long-- we use common units of measure, like civilized folk, here at the Flatiron-- lying in a crater with yellow, metallic fog billowing out. Adding the bard to their ranks, in they go. Careful, careful...their cautious entry & careful use of spells overcomes the dual disadvantage of the fog & the white fur of the creature within a snowbank! Tim dubs them the IceSpaceNarbeapes, "with imaginary horn" because I describe them thus: "like a giant gorilla with four arms, only instead of evolving from primates, it evolved from bears, & had a narwhal tusk jutting from it's brow, one eye cataracted over white, & it's wasp-like eyes sink into yours with an icy hand of coooooold!" The miniature, of course, lacks a horn, & I think Tim's masterful mini wrangling has spoiled them. Luckily enough, I brought more minis! Sloth-apes with metal pipes who clang on the paladin's heavy armor while the cleric's spells dig into them & Irene's ranger, Wren, sprays their green blood all over the rest of the party with a brutal barrage of arrows. I worry that the cleric's spell spirit guardians is broken, having been warned about it, but I think I figured out the missing piece of game balance; concentration checks for spellcasters taking damage. Extra incentive to kill the cleric! The guardians-- little gems instead of the intended little coins-- still create a messy neon green splatter of alien ichor, themselves. Stavenham, with panache, stays spotless. I'd like to say my adopted daughter Columbine did well, but Bridget's dice were turned against her; it was a rough hex & it stuck on her all night. In the snow the party finds a carnelian & a zircon. 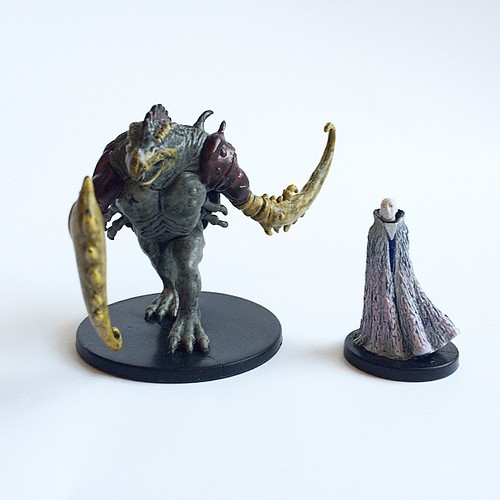 While the rest of the group goes on, Scott's curious Kal-Ra wades into a slushy puddle & kicks at the cracks in the ground: he triggers the "hazard" of the collapsed ice-- there is a blocked tunnel that it extends from-- triggering a cave-in at the mouth to the sphere where they just fought the Barsoomian wampas. In the next bubble, they are lost in the swirling ochre fog, surrounded by dancing white-blue lights...Domen announces them, addressing the wil-o-wisps, but a bald Tilda Swinton of a woman, bearing a black greatsword five feet long answers. She is Marjan, a Knight of Zargon, & her unicorn sigil'd-plate-clad form is shrouded in a cape of white feathers buckled with a silver clasp of a smiling child's face. Impressed by the groups courteous approach, she also introduces Watson, her pet hook horror. "Tame is not the word I'd use." She speaks in my general Transylvanian accent & the camaraderie of the group leads her to open up about being from a forgotten people, the Cynidiceans. Within the comet, she says, there is a horn, the horn of Zargon; she asks that the party bring it to her, for which she will reward them. Her mother & sister also seek the horn, & they have...philosophical disagreements. Marjan seeks to keep the horn safe, control it. She offers to cover their retreat, to keep a place for them to return to rest, & on they go, slanting down into the deeper fog...& out onto a collapsing ice sheet, the floor caving in & crumbling down thirty feet, leaving a twenty foot drop to the rubble. The party teeters on the edge but grab each other, falling back safely. Stavenham's enchanted rope of climbing snakes across the gap, & thanks to the magic of advantage, they all make it across alright, the bard showing off with a tightrope walk. Yup, his backstory about him & Pantaloon being friends sure seems to check out to me! 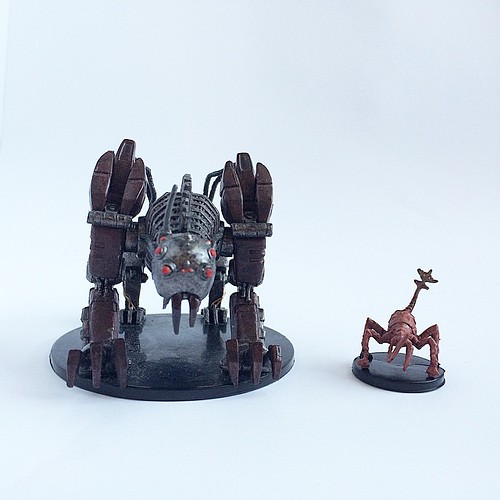 The next dome has a collapsed tunnel on one end with sludgy, frozen water pouring out of it, freezing into ice fangs & stalagmites & solidifying around a rusted out iron golem...& two more horned mutant apes with the frozen glare! Shaggy & Smiler, though Tim dubbed him Scooby: I gave them names to differentiate the critters, the really hirsute one or the one with the torn cheek & the ragged black shark teeth zig-zawing out. They make short work of them thanks to Wren's deadly aplomb & help from the rest-- but boy does the ranger's bow go thwang. Columbine gets some hits in but still, the dice...I commiserate. I've been there. I tell her about my ranger who had favoured enemy: dragons & didn't land a single hit on the black dragon at the end of Forge of Fury. It's on the cover, shut up about spoilers. Domen is interested in golem, & goes over to it...only to have his chainmail start rusting out as the shy tentacle of a rust monster tickles his leg! Aegwyn & his magic sword spear it handily, but it is easy to see how the golem ended up wrecked so badly. Domen gets it to take a stuttering half step by building a bonfire beneath, knowing that fire helps iron golems. Kal-Ra wades into the icy slush...& is rewarded! By finding a driftglobe, a bisected glass sphere that when twisted lights up a white-blue light & hovers, following him. From here, there is the collapsed tunnel, the tunnel they came through & the new pit leading down to...somewhere with even more fog. There is an iced out corridor going up, with...spider webs at one end. & another corridor choked with webs, which Aegwyn sets ablaze; luckily for them, the reason the fog isn't clouding this room is because I figured out the ventilation in the place, so the nylon-ozone burning smell of webbing is a modest Con save. Now from here, where do they go? 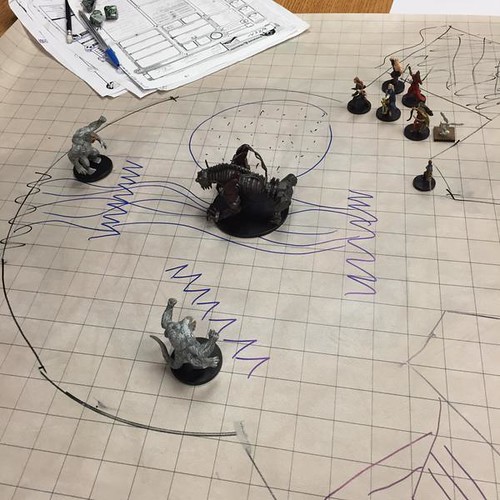