The fog of insomnia makings putting your thoughts in order hard. Makes it effort. So I've been sort of absent & silent here, I know. At least I've been writing for stuff over at Tor.com; sorry Livejournal, but they pay me, you dig? Anyhow, today is my sixteen year meet-a-versary with Jennifer, & we've got a low key Thankgiving planned with Kira & Nino & Olivia. "Real" Thanksgiving is with Kira's whole clan, but that isn't on Thanksgiving day, since for some people it is "second" Thanksgiving. Anyhow, we don't have to do anything until 4:00, & despite a patchy night's slumber I actually slept in, so I'm going to drop a couple of book reviews I've been procrastinating on. Right after I make some hashbrowns & eggs for breakfast. Okay, the taters are sizzling, precious, so while I let them sit on the fire, let's get cooking.

Whoever you are,
Be. Whatever you like, Do.
& Say what you want.

Oh Amy Poehler! I didn't take any notes when I read this, it was just pure pleasure reading. I'm not a big reader of comedy biographies, but I'm totally in the cult of Amy Poehler. & you know, I really liked Mindy Kaling's book as well; maybe I like this sort of memoir or essay thing? Low investment, high return. They don't require a lot of brainpower to get through & they beam out a steady stream of chuckles & dopamine. Poehler talks about insomnia, which I sympathize with on a personal level (same as below, when I sympathize with the kid's recovery from surgery). She never says anything bad about Will Arnett, & says many nice things about her friends. Her story is pretty much great & it seems like everything Amy Poehler does is wonderful. I don't know what to tell you, that's the impression I get & I feel like I'm probably correct. Oh, also, "every mother needs a wife"? The anthropological term is "allomother"!

Aristotle and Dante Discover the Secrets of the Universe by Benjamin Alire Sáenz.

The name Soledad.
That's a note to remember.
A really good name.

This was our Eleven-Books club book. Beatrice's pick. I am not a big consumer of "issues & feels" YA, so I was happy to have it. I've never gone the John Green route, is what I'm saying; Terra lent me the one with "Alaska" in its name but I never cracked it. Emotional manipulation is not my thing; I don't mean that as dismissively as it sounds. I just don't go in for drama. If it is bald, cheap emotional manipulation I'll get mad, but if it is well done then go on. (Those Lumatere Chronicles were both cheap & adroit, at the same time; I was conflicted.) So this book! So, I found it very true to being a teenager, as did Rasheem. The sort of unspecified anger, yeah, that's the stuff. The big question I was left with was "am I sad that this was a gay romance book, & not a gay friendship book?" The turn towards romance was a little out of the blue, but then, sexuality & teenagers is like that. I get being a late bloomer, sexually; I didn't "get" it either. I'm not sad it was a romance, is my point, but I wonder if I'm sad that it wasn't about resolving unrequited feelings in a friendship. Shrug! I found the politics of being Mexican to be interesting; the politics of being gay are largely invisible, since everyone's family is very accepting. There is an act of homophobic violence, & there is an act of transphobic violence that is referenced; I think that latter part could have used more attention. Oh & there was also a bit about physical therapy & recovery in here; those scenes stick with me, since I'm in the same boat, & feel like I've been stuck at sea forever. 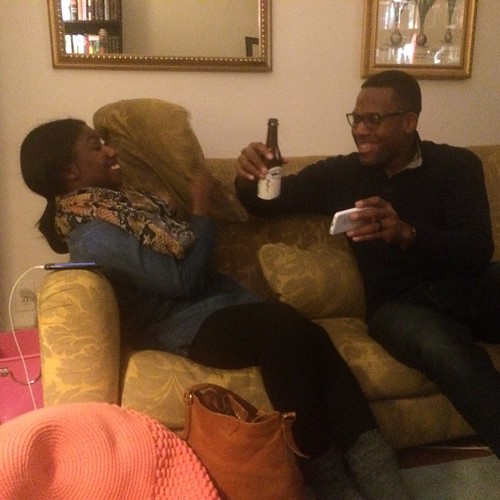