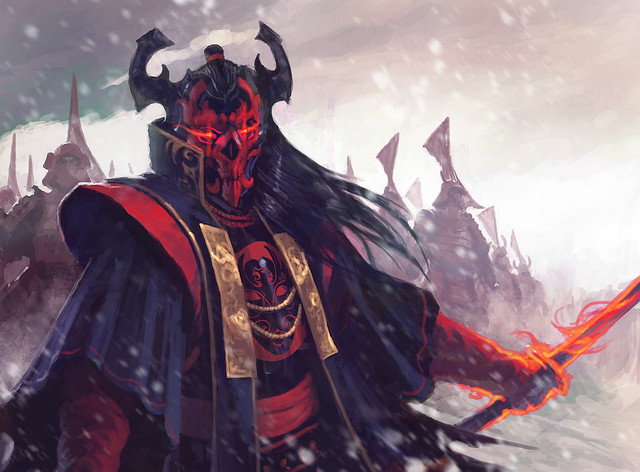 I promised Lilly that her bushi warrior, Amina o-Kitsune, would finally have her wedding to commoner warlord Goro this session, but I just couldn't deliver. For once, I don't hold myself responsible! After game everyone said they noticed that I was taking due care with the pacing, pushing the story forward. It's just, well, the character's hijacked the story. As I like character driven campaigns, I can't hardly complain. Why would it! I had fun being taken by surprise, they had fun making their own story, & their lateral move ended up revealing facets of the world & the NPCs & the campaign that they hadn't discovered. Wins all around; they advanced their personal story arcs & the campaign's story arc...& just barely, this particular story arc. Goro & twenty of his Shoshin "Broken-Hearted" mercenaries finally arrived, so at least the bridegroom & bride are both here. I ended the session with the daimyo & Amina's parents arriving, so hopefully nothing will stop the wedding from happening next session...unless something actually stops the wedding, that is.

My grumbling is just #humblebragging, ultimately. I want the kind of players who grab the story by the scruff of the neck. Having characters with involved backstories mean that there is a whirling hurricane of plot hooks; it's not just the DM throwing out canned plots, but stories developing out of the primordial soup all on their own. In this case, it was Lilly that started the snowball, but everyone pitched in from there. Last session ended with Luke's character Haru o-Kitsune & Lilly's character Amina both badly injured by a shinobi attack. Nicole's zaibatsu cyborg, Keku no-Kin managed to make it through the fight without a scratch, oddly enough. Lilly's character was down & bleeding, & being carried by Iroha o-Lung, who was wounded herself. I took Lilly aside to discuss maiming her character, but she used her blood magic to bond with Iroha, sharing some of her blood & life-force. I had Amina lose a point of Humanity & write down the power Bloodbond right below where she has Bloodspeaker (& where Haru has Woundstealer). 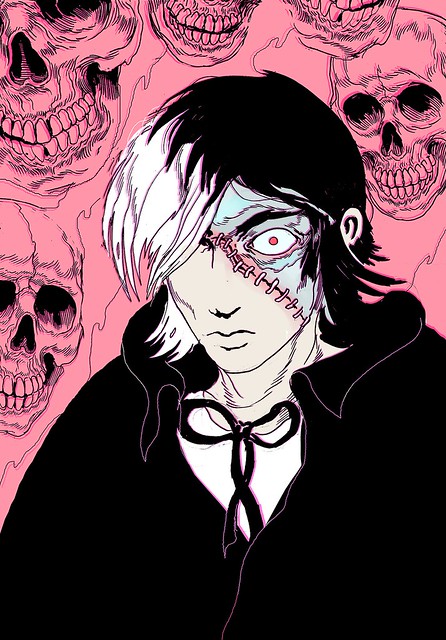 That started the love triangle. See, gender & sexuality are explicitly performative in the Shogunate, but marriage exists for the purposes of procreation & family alliance...which can lead to conflicts. Iroha, engaged to Haru, is bisexual by orientation & prefers women by preference, but is perfectly content with her marriage plans. After all, an arranged marriage like this is the fate of all nobility; she's lucky enough to have done the arranging herself. That said, she definitely fancies Amina, & every time the party has split up, Iroha has gone with her group, without fanfare. So as I told Lilly, "Iroha is in love with you now. It is unclear what part of it was genuine & what part of it is a compulsion from your bloody enchantment." Lilly isn't one to turn down a dare, so she turned it up to eleven instead, & decided to full on start wooing the Shogun's cousin, who happens to be her own cousin's fiancée.

Keku, throughout all this romantic courtly intrigue, was engaged in pragmatic & paranoid labour. Her Virtue is Protective, so I gave her Willpower for deciding to spend her time fixing up the weapons of the Castle. She spots the Broken-hearted bandit crew-- well soon to be legitimate soldiers-- & Goro & the wagons of boxes they take with them everywhere first. & when Haru was lying on the ground, full of shinobi poison, her familiar--the blasphemously named Nagini-- sucked out much of the poison. Haru does bear the tsuba of Nagini, he's a minor devotee-- & since he's taken a sudden interest in poison, after being poisoned, maybe he'll become a greater one?-- so Nagini is extra willing. Then of course there are her dreams, as the cybernetic eye in her head hijacks her sleep to crunch numbers...

Haru decided to start writing "romantic" letters to Iroha in response to Amina's pick-up moves. "It looks like I've overlooked a critical duty & now I must seduce my betrothed." His romantic letters consist of basically "we're going to be such a power couple, oh baby, when we join the power of our two households to crush our enemies, how hot is that?" You know how much I like the Avatar: the Last Airbender episode "The Beach" where the bad guys have a day at the beach & Azula goes all ultra-power couple. So basically that. Goro shows up, & that's a distraction for Amina when Haru makes his move; Goro's facial scar has-- strangely-- seemingly grown, a cruder gash covering the top of his head. He still has that dark lure Amina likes, & so Haru's letter's find a receptive audience, since Iroha is also inclined toward Responsibility. So they work! & Haru & Iroha sleep together; Amina & Goro do not. 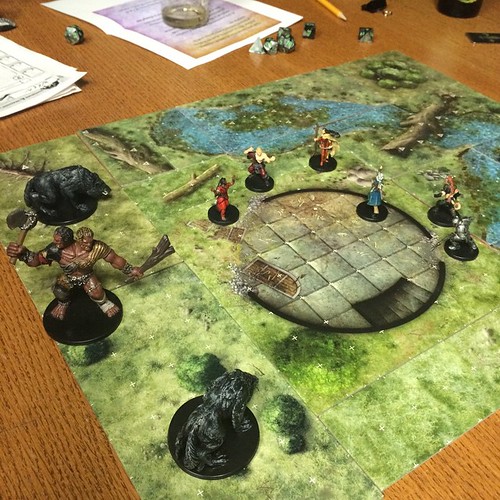 You know, I think this is the first time I've ever fought an ettin. It's neat to get a crack at the classics! I'm an Enchanter, so a fight with a bunch of wolves-- immune to the spells that require a mind or a humanoid target-- & a two headed giant who gets to roll twice to resist, once for each head? Forced some interesting tactical decisions. Tim, the DM, was remarking on how our fairly random distrobution on the map was the sort of accidental chaos that presented more interesting strategic choices. Don Seignour Pantalone, my tiefling wizard, was suddenly pinned between a couple of direwolves & the mutant giant & I ended up using my back-up sub-specialty, Abjuration. I rope-a-doped some attacks-- thanks mage armor, shield, et al-- & the elf monk, Scott's character Kal-Ra & Irene's human ranger Wren finished off the giant, while Jonathon's half-elf paladin killed a dire wolf & scared the other one away with help from Columbine, my characters adopted tiefling rogue daughter. Sam had to bow out of the game, but Carl has taken up his place as the healer with his half-elf cleric, Domin Farwander. Our half-elf paladin worships the elven god of trickery, & our half-elf cleric worships the human god of trickery. This could be fun. 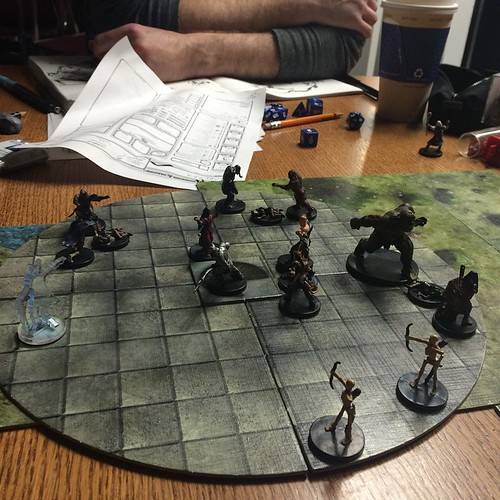 I'm a bit ahead of myself. So two sessions ago we found a key in Wulgreth's possession with a creepy crest of a raven on it. Finally, our investigations into it have borne fruit! At the library Pantalone found all about the now-probably-extinct noble house the Tenebrosi (except for a possible lost heir...) & their last parcel of property; Kal-Ra found out about weird necromancy tree rituals-- as he's searching for a magic seed, it's right up his alley. Given the attack last session I think these issues might be related; the assassin who escaped might be Amarith wul Nariyial-- I wonder if Wulgreth is actually a "wul Greth"?-- & that Amarith might be the lost heir. There is mention of creepy evil wizard journals, my absolute favorite kind of treasure, but they were...gasp, stolen! Following the glues to the abandoned property & using the key netted up some other treasure, though: 23 PP, 138 GP, 1233 SP, 345 CP, a 4th level scroll of magic missile, a cloak of antivenom that grants advantage against poison that Domin claimed & a +1 longsword that Agweyn was born to wield. & more clues! Discussion of a pet-- maybe the wyvern we killed?-- & an allusion to ruins. There were three; we guessed wrong on the first two, facing an ettin & then a necromancer & his gang of wights, ghouls & zombie ogres.

The Emerald Macaw!
Feathers worth 450 gold.
It's weakness? Music.

Is this the first non-Boing Boing, or at least non-article writing of Doctorow's I've read? I think it might be. First an ettin,, now a Doctorow! You've probably heard about this book by now, it's gotten plenty of attention, but it deserves it. A nice all-ages book about gaming, with a "girl gamer" angle that widens the audience. I liked Jen Wang's first graphic novel, Koko Be Good, & the art doesn't disappoint here. Despite being about topical hot-button issues like "girls play video games too," which is blowing the mind of misogynistic bullies these days, that's not the dominant focus of the story. It is a friendship between a player & a Chinese gold farmer. Gold farming is...weird & pretty futuristic, in a dystopian way, huh? I don't have a lot to say but it's a fast, fun read that might make you think about things, surprising things about the global economy & such. Low risk, with a good return on your invested time. Oh, & I'm pretty sure I spotted a Superbrothers: Sword & Sworcery background homage; there are probably others that I overlooked; maybe I'll go back & look to see if I can recognize more subtle video game references.
Collapse