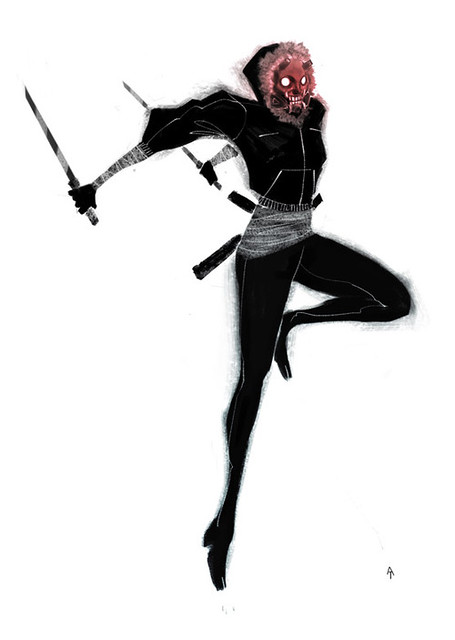 It's funny how time dilates in roleplaying game battles. The minis hit the table & everyone is waiting their turn to make split second decisions. The consequences of their choices require dice, math, description, & then the enemies go. Infamously, we used to count up the number of rounds in a Dungeons & Dragons fight in Scott's game, then say how long an hours long battle in a session had actually taken, & it was all like, a minute. In Oubliette I prefer to think of each round as being a cinematic take. If the camera cut to you in the big battle scene, what could you do before it cut away? World of Darkness metes out time according to "scenes" already, which is something else I like about the system, so I just want to keep the abstracts wibbly-wobbly. If I needed to set a timed countdown, I'd just tell them a number of turns anyhow. My point is: not a lot happened in the last session of my game, because quite a lot actually happened! Shinobi attack! Assassins in the night! 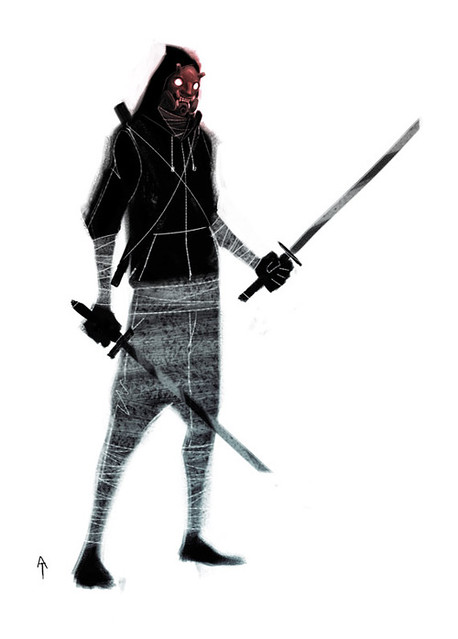 I don't use a lot of obvious Japanese terms in this Oubliette campaign. Despite being very visibly Japanese in flavour, that's not the only source I'm pulling from by any means-- just the most visible slice. There are layers below it, in religion & language & history, so I prefer to call it "Pan-Asian" in influence, the same way that very Western fantasy settings are a blend of European mythologies & histories as well as new invention & artifice. That's what I'm going for, a broader base of inspiration rather than appropriation, so I try to avoid "samurai" as much as possible, though it can't be avoided & colloquially I'd rather stay in character than break immersion to try to correct someone so they could be, what, immersed better? Still I say "bushi" rather than "samurai"-- issues of aristocracy over pop culture aside-- & "geiko" instead of "geisha" to make the delineation clearer. It is very hard, however, not to call a spade a spade. I say "shinobi," but you should read: ninjas! 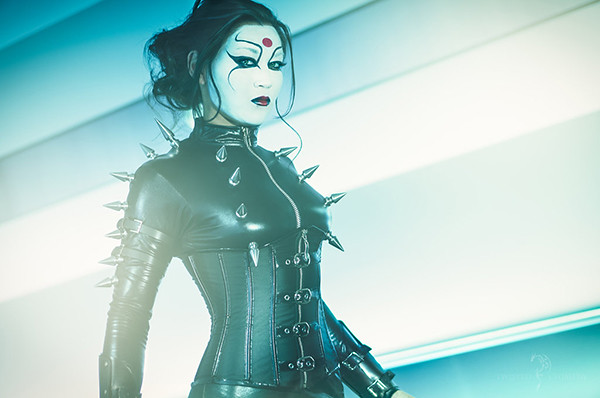 This session was much more orderly than the previous two sessions, otherwise. Keku no-Kin, Nicoles character, the zaibatsu cyborg, had strange dreams in the night. "UTILIZING LIMINAL PROCESSING" said the strange letters, that she was somehow able to read...much as she was somehow able to read phrases from the scrawl on the wall in the Scribbler's Tower. Bits & pieces, as the mechanisms of her now-integrated cyber-eye used her subconscious mind for data crunching. The word "gods" appears multiple times-- the graffiti on the walls is written in many hands, at many times, with many materials, but seems to be read as one document by the Eye-- as does the words "incarnate" & "mortal vessels." Haru o-Kitsune, meanwhile, buys a dot of Mechanics & he & Amina o-Kitsune-- Luke & Lilly, respectively-- split up to explore the two towers further. Keku goes with Haru & she's able to get the Scribbler's Fort, with it's big steel plate making the mechanisms of the castle accessible, pretty much operational. She's a deft hand. Iroha goes with Amina & then-- ...shinobi!.... 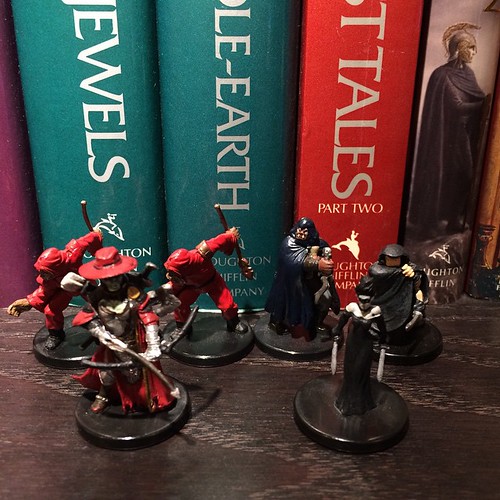 In the ninja battle I leaned on a lot of Fourth Edition philosophy. In particular, some of the ideas for solo monsters, like reflex actions. There were two groups-- I'll call them Red Clan & Black Clan, but obviously they've got backstory known only to the Dungeon Master (at this point)-- & one group was led by Masui, the woman from the auction who traded Goto "The Black Sutra," as Amina's sharp senses spotted under the distinctive face paint. Some of the reflect events included things like "attacks of opportunity if you move through the reach of the kusarigama" & "if they get hit they drop a smoke bomb & get a free Stealth check." There was a bunch of nested actions & things but...we all bought a ton of sake & sochu to game so...we were pretty drunk & I might have gotten...a lot sloppy with the complicated rules that I wrote while sober. Still, fun! & I haven't had a fight in forever. The shinobi fought hard, & took Amina to death's door-- where she lingers-- but withdrew when the going got tough; on the otherside, Haru similarly took a brutal series of stabbings, from blade & shuriken & poison; the shinobi retreated, but only because the soldiers were alerted & flooded up the stairs.
Collapse