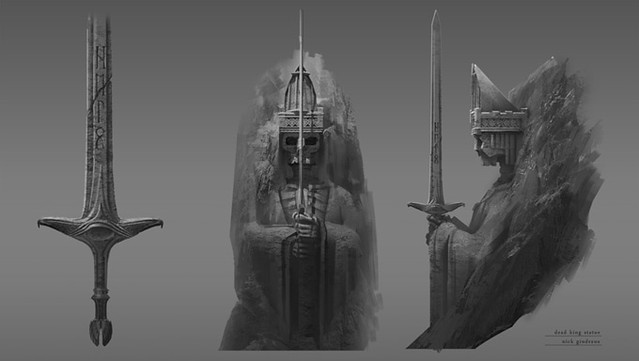 I sort of figured that this session would be a mirror-image of last session & I was correct. The one thing I didn't plan on was Silissa's pottery class; I knew she'd signed up, taking her out of game, but I didn't know it had already started. I made a story-dependent conflict that hinged on her presence & didn't go off. Fine with me, I can keep it in my pocket for later, but this session discussed more about "the Dervishes" & how the "White Ones"-- which people think is the Cho zaibatsu, whose agents wear predominantly white as their corporate uniform-- summoned them up to attack the Royal Physician. Consider it officially foreshadowed. I also realized once again how I can struggle against my better instincts. I think I make a pretty good dungeon, & I made the Gate of Yomi like a dungeon, & my players explored it like a dungeon...so why didn't I just commit & make it a dungeon? I put puzzles & social challenges in, so on some level I did, but I could have put monsters & treasure in just as easily. I guess I worry that it will break the flow of the game up, & while that is a good thought to have, the suspension of disbelief & the tropes of the game table would support it. Just something I've been thinking about, as the players explore the castle & find secret passages & occult scribblings; "this is all pretty dungeon-y!" The same thing happened in the last few campaigns at some point or another, & I guess I'm just growing in awareness about it. Why not just toss a couple of risky-but-not-session-length combats in there? There were some in the Pyramid (even though they mostly avoided them with cunning or charisma; I consider those perfectly acceptable "weapons.") This session, to get back on track, started with some big experience point spending: Luke improved Haru's Ranged to OOO, with Haru practicing explicitly to get better for when he marries into the Lung family & has access to guns; Amina goes on a spree & buys Athletic OO, Survival OO & Melee OOO. 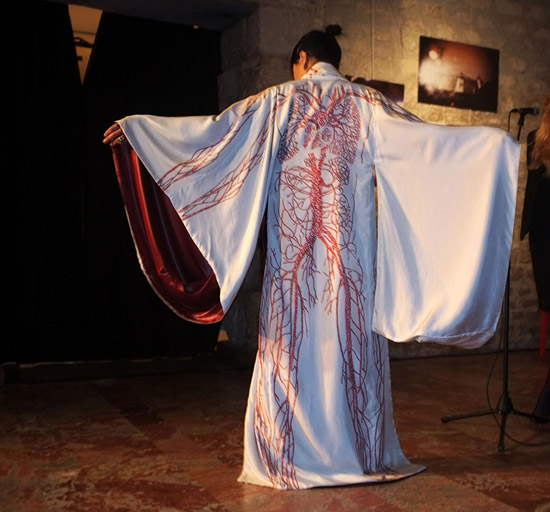 (The Arterial Kimono; "Silk Me Back" by FMR.)

Amina o-Kitsune's gift from her betrothed is a white silk kimono with the blood vessels of the human body sewn into it. It can be worn on its own or with armor, & it grants an "extra box" of health, making a "blood pool" available to the wearer. The "pool" allows one health box worth of blood that has been purposefully spilled on it to be stored as a "virtual" health box, used either when the player takes wounds or engages in blood magic. It is refilled when the wearer purposefully spends a point of health box's worth of blood, soaking it into the hungry silk of the robe. Besides that, of course, is her reasonable expectation that the Gates of Yomi are "hers." They are Goro's, in fact, but since they are engaged to be wed, it is fair claim. Most of the session is exploring that castle. They find a secret passage in the fireplace of the samurai's quarters on the right-hand fortress, that leads to the secluded mountain-top shrine of Akira Kitsune, the so-called "Butcher Fox." Haru o-Kitsune & Amina both take turns going into their blood trances, seeing the unseen, trying to sort out the diabolical temptations from the tantalizing hints & vice-versa. Keku no-Kin talks to Iroha o-Lung about her ambitions, & while the others get up to their blasphemous occult hijinks, she manages to unstick the rusted gears somewhat & get the piston-driven spears on the wall to start firing. They also explore the opposite statue-skull of the Gates of Yomi, the one marked with dire warnings about quarantine & contamination; they find much the same layout, except full of the dust of dead spores & ragged "spider"webs like decaying lace. No butcher hooks, but instead scratches, deep in the stone of the walls; no signs of murder but much crazed graffiti in the communal barracks; the dining hall has no iron maidens but is filled with creepy echoes; the map room doesn't have leaks, but does have a metal plate bolted to the wall; the ballista room is full of gross fungi; the noble's living quarters is littered with bones & a statue of Tenko o-Kistune; last, the greenhouse above is criss-crossed & choked-- we're talking impassibly so-- with ancient, sticky, string- & rope-like webs. 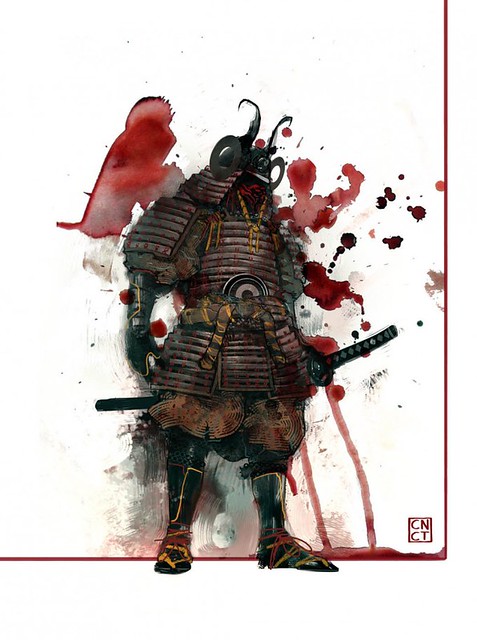