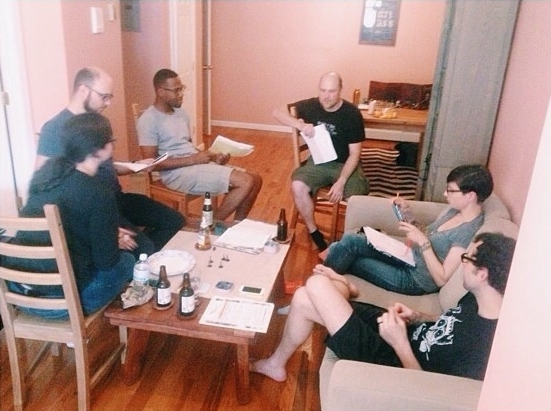 Another episode in Tom's series of thematically linked one-shots, Dead World! This time, set in the Civil War. We were supposed to play extraordinary individuals, so I made "Poor Mister Threadway," a convalescent in one of Dorthea Dix's new mental asylums. How'd he end up there? Well, in another life he was Lieutenant Colonel Gaius Threadway, an officer in a Union Zouve unit, one of the Civil War's special ops. His soldiers were out-maneuvered & out-generaled by Lee, & they perished in a bloodbath. Badly injured, Gaius lived, & woke to find himself in a shallow mass grave with all his men. After digging & cutting his way out, he was left a shell of a man. Nerves broken, mind in a protective fugue, he was retired to care in a new-fangled mental health facility. I gave him wonky stats; only one dot in Composure, Stamina & Resolve, & highest marks in Dexterity, for shooting & swording. (Photography by Jessica &

He woke up in his nightgown & therapeutic rose-coloured glasses, in a clearing in the woods surrounded by a thicket of unnatural thorns. Clearly, to Gaius, he was having an "episode." Along the way he met Alicia's character "Nurse Wendy," a Confederate nurse who was the only person I thought was "real": I assumed she was from the asylum, come to look after me & fetch me hope after my "constitutional." "Rusty" was Lilly's Wild West scoundrel; I don't know her history but she's trouble, & she gave me some money to buy a crushed red velvet suit, pink shirt with lace, a pistol & a saber. Because obviously that's what I should wear. Cyrus was Rasheem's character, a Confederate Negro. Yeah, playing in the Civil War is one of those things where you have to bite the bullet & decide what to call black people. I went with Negro or "coloured folks," since I figured that was the inoffensive-in-historical-context terms...plus I cheated & just played an abolitionist from the Union. Cyrus was awfully angry, & disappointed that we never went to the bawdy house in town. Felton was the last of our number, Ken's character, who was a Revivalist, a travelling preacher...but also a Santería practitioner, passing.

All of us, thrown into this odd & prickled clearing, hedged in by massive brambles with dagger-like thorns. Slashing, stabbing, mist-covered. I have to admit, Poor Mister Threadway was little help, convinced as he was that he was in a hallucination. Mostly waited for the nurse to lead him back to his hospital. Eventually the thorns opened, closing behind us, & we found a dead Confederate, a withered husk, with some paper money & gold coins. & a town! Hallelujah & pass the ammunition, Rusty just bought me a new Colt .44 Dragoon. This town is great, they gave the crazy guy guns! & then of course, while we are sitting in the common room of the saloon talking about whist or old timey stuff, it goes sideways. The sounds of the meat tenderizer smashing bones is the innkeeper hammering her hands into pulp, shattering her forearms into jagged splinters to try to stab us with. We actually beat her up pretty well; pinned in a hallway where we can stay in charge of the fight. The next fight is not as easy of a thing, now is it?

No it is not. So here is the thing: I bought a gun, but my plan from the beginning was that Gaius would react badly-- as in, post-traumatically to gunfire. That was my "trigger" & I think there were only...two gunshots? One from a PC, & one from outside. All the zombie, Silent Hill stuff? Well, I just decided that was what it was like for Poor Mister Threadway, all the time. The corpses of his men, that he'd hacked up to dig out of, all around him, haunting him in his fitful sleeping dreams & insomniac waking thoughts. Everyone is clearly trapped inside of his hallucination, he says, as a ghoul jumps on him, spearing him in the neck & getting one of those big lumber hooks right in his belly. Ouch; I'm almost dead right there! Eventually the next wave is fought off & I know where to go: the church! The barricaded, fortified church. Heck, that's the only thing I haven't seen in my dream before, so that has to be it! At this point I should mention that Jess hosts a party like I host a party. You finish your beer, there's another one before you notice. Wine half empty? Top it off. Try this whiskey we have! Easy to lose track of drinks.

What's in the church? Exposition, creepy church stuff, ghosts & the dead. & the Nuremberg Clock! Showing up in the first Dead World-- "like a dream, I've seen this in my dreams!" as Gaius loses his grip on real, hallucinatory, dream, awake-- he thinks they can use it to fix their mistakes. People who've been giving in to their Vice are starting to show signs of it. We discover that there is a big bad devil or undead or Problem at the cemetery; religious Nurse Wendy says it is the Devil & Gaius thinks maybe he can use the clock & the Devil to save his "boys" from being killed by Lee's forces. Or instead the monster is a giant maggoty blob, obese with cancer & throwing tombstones like frisbees. It is a dark scene but then...it always was a dark campaign, as the note we get from the Narrator is Tom telling us we've been dead all along, & we've been trapped together in Purgatory. Gaius set the fire to escape from the asylum, but ended up killing the other inmates; I had stolen the keys but was too afraid to stop & let them out, & when I finally threw open the window to make a break for it, the backdraft burned us all alive...& I woke up in having traveled to Hell, or near enough to it, geographically. In a southern direction. 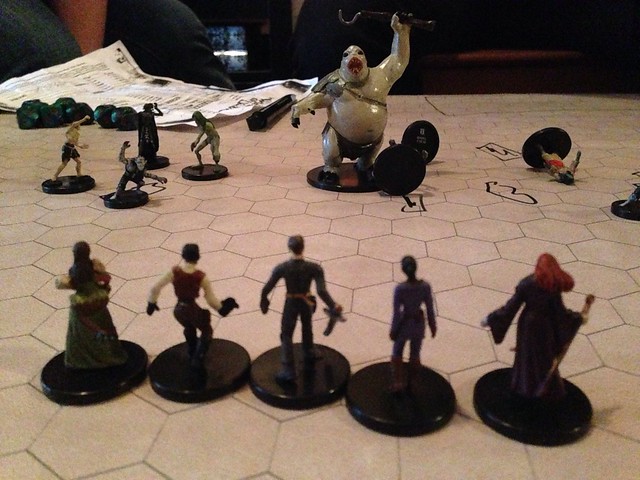