This One Summer by Jillian Tamaki & Mariko Tamaki.

Chocolate, marshmallow;
press it between graham crackers:
it makes the sound "s'more."

This sort of genre, of telling might-as-well-betrue stories of childhood, can be a tough line to walk. You risk, at least with a reader like me, the story becoming too universal, too banal. The Tamaki's never really do risk that, because they are smart enough to anchor the story in relationships, not just the interior world of a hurting kid. Two friends who spend their summers together, because their families have cottages next door to each other. Rose, the protagonist, is a girl on the cusp of puberty struggling with family stuff-- her mother's depression & parents relationship around that-- while feeling the allure of the older teenagers. The younger, Windy, is the daughter of hippies, & her story is one from a distance; younger than Rose, she sees the attraction to the more "adult" things-- like slasher movies & sex-- but doesn't feel it herself. She's outside of the circle of the fire. Really I would say what this comic is about-- thematically, not narratively, as this is hardly a polemic-- is the insidious nature of misogyny, & how the shitty cultural narratives of sexism try to get their toxic fingers into young women. You probably can feel a connection to the mise-en-scène if you've ever been a camper; the divide between you & the townies, the mayfly friendships that might just, on a freak outside chance, survive when the summer ends, but probably won't, the small quests & nothings that fill the hours. There's a lot of real life inside of here. I was reading this when the trailer for Leigh's movie Honeymoon came out, so in my head the cabin where they watched all these horror movies totally transformed to the cabin her family has in Canada where we spent a chunk of a couple summers. 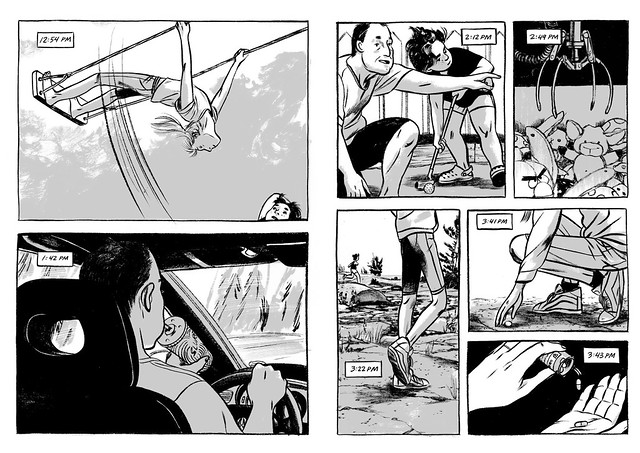