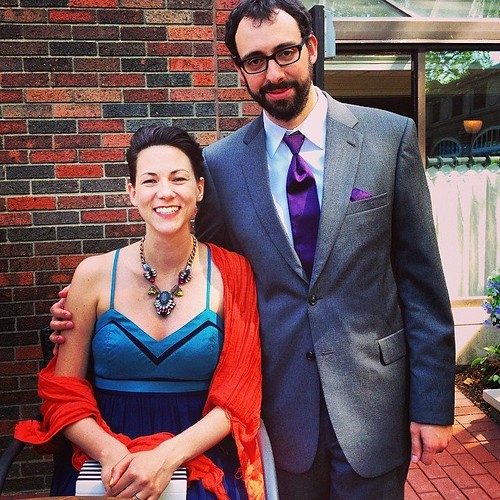 Between being hungover, then traveling, then getting back home to a convention & a busy schedule, I haven't written up Ron & Ana's wedding. It slips away but that's the thing about time, that's what it does. Mostly. So you can tell from the picture that I wasn't in my usual uniform of all black. That's fine. If you put me in your wedding party, I will wear your house colours for the day, I don't mind. The day of the wedding-- well, the groomsmen sat in a hotel room drinking Japanese whisky waiting for a call to take photos that never came. That was the first part; the wedding got pushed back because photography was A Thing. We ended up getting snapped eventually & on with the show! The ceremony was nice & quick & had a good bit of Guatemalan customs in it, since that is where Ana is from. Her sisters were her bridesmaids, Marcela & Daniela, & their command of English is not as good as Ana's-- certainly world's better than my non-existent Spanish-- & getting Marcela to flirt with the DJ was the evening's project, though Jennifer says that she was getting the eyeball flirts from her pretty hard, too. So, married! My duties were tricky: stand at a forty-five degree angle & then walk out on the far-side of Marcela. Then, dance. Well, & drink, & pour drinks into Ryan. A pretty fair selection of Scotches. & then dance. It was fun & even better, it ended at eleven.

Which is good, because my sleep schedule isn't any better, & wasn't any better in the Wasteland. Actually, I take that back; it is better, because Jennifer has convinced me to try to come back to bed before I give up & just wake up. You know, I will wake up at four with my arm jabbing in pain, then go to the bathroom...but instead of just giving up, now I try to fall back asleep. I was worried such a technique would wake up my wife, but it is her idea! I'm pretty lucky. She takes care of me. So that helps, when it works; I usually get at least another hour out of it, if I can pull it off. Anyhow, in Ohio it led to me hiding in the bathroom playing games on my phone until the sun came out, & which point I felt like I could creep back in & sit in the hotel room's chair on my laptop. A fascinating story, you're welcome. Anyhow, I have surgery on the eleventh of this month, so hopefully this is a problem that will go away. It doesn't help that I have started getting sleepy early in the evening now, to match my increasingly earlier wake-up times. I tried to keep it together last night but I still crashed out at like ten. Barely even that late. The hotel bed was very fluffy-- too fluffy for Jennifer's taste-- but I slept alright. Long story short, the wedding was a nice time, & that was Sunday.

Monday our flight didn't leave until later, but it was Memorial Day, so everything was closed, & we were too out of it to care about doing anything about it. Instead we ran errands, which worked out, because is shattered some illusions. See, downtown Cleveland was looking pretty good. Better than when I lived there, anyway. The problem is that it is a sort of mega-mall, an area where everyone has been pushed out besides shops & luxury hotels. Still, it is at least a place. Coventry, that place was the Saint Mark's of Cleveland, & I guess it still is. I can see how someone would live there. University Circle has always been the best thing in the Wasteland, worldclass museums & hospitals built on Rockefeller money. Now you can just live there, & that's where we stayed. Jenny was impressed, & I had to admit things looked up, despite all my predictions otherwise. Then we travelled half a mile, to the land of abandoned homes & burnt out building I remember. Ah, of course, the classic trick of gentrification writ large; price people out & export poverty to the workers on the fringes. I hear that everywhere I used to spend time is even more ghostly. I can see how Kingtycoon got into urban spelunking so hard; you'd have to try really hard not to. The last factories & machine shops are done & gone now, but their giant empty skeletons lay in the middle of city blocks, unavoidable. Of course you'd explore them, you don't really have a choice. Then, we left. I'm home in Brooklyn now. We had a nice trip, but I don't intend on making another one any time soon. Some people talk about where they are from as "home." That's pretty foreign to me. Home is where I want to be, & that is here. A cheesy platitude but true.
Collapse