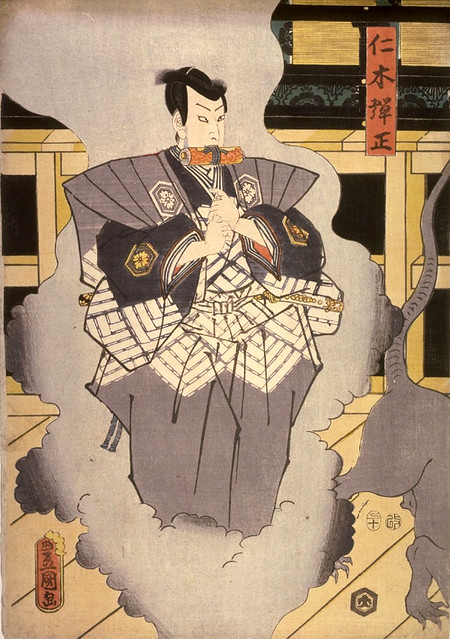 Ron's bachelor party was, quite ingeniously, a Legend of the Five Rings one-shot. The best kind, too: romance!

kingtycoon & JR had characters that they have famously played before-- Kingtycoon's Crane iaijutsu duelist Kakita Endo & JR's tattooed monk Hansboro-- & the rest of us got loose avatar characters. Jon was Isawa Jonji, the Phoenix Void caster, Tim was Tsuruchi Timke the Wasp clan archer & Jason was an Emerald Magistrate. Me? I was a liar! So here is the thing: obviously Spider is for me. I don't actually like L5R's Spider Clan that much; a little bit of libertarianism & a little bit of splatterpunk blood magic? It's not quite there for me, but that is beside the point. I am Spider. Like it or not, that's for me! I sort of think the Spider should become the clan where all the weird stuff gets pushed off to-- like sure, a blood magic family, but then a gaijin fire-pepper family, an Ivory Kingdoms family, & whatever other big ideas could go. Something. I'm drifting; my point is Spider! We were playing in a historical setting where the Spider are sort of okay-- the Colonies exist-- but I thought it was better safe than sorry, so I kept it secret. Chuda Morkao pretended to be an Usagi ronin with "weird stuff" going on; that way when I used Maho I could just pretend it was a strange Kiho power or Courtier ability. I did have Courtier ranks; more than Shugenja actually, & since blood magic goes off your total ranks, that was fine, just fine. My school power was to be able to conceal my blood magic casting with raises; Kingtycoon said he thought I was raising a lot, since I'm unfamiliar with the rules, but really I was raising to keep all my stuff under wraps.

The plot of the story was thus: Matsu Ino, a high-ranking Lion clan official, announced his wedding to Kakita Aniko, a Crane artisan. We were invited to the wedding...& it was quickly revealed that we had been invited by Shosuro Ryohei, Ron's Scorpion shugenja. Both Endo & Ryohei were former Topas champions. I knew a little bit more of what was going on; I knew Ryohei & Aniko were in love, for instance. My plan was fairly simple: I was going to use black magic to drive the governor insane, then use my courtier skills to turn his court & his subjects against him, then either push him into seppuku or a fatal duel. The session itself was fun; we had social maneuvering in the court, which was the high point of the game for me, then detective challenges in Aniko & Ryohei's room, then spiritual challenges at an abandoned shrine, & then fighting challenges against weird demons who wanted to eat Ryohei (who was hidden, "buried alive.") In the end, as I sort of thought might happen, Kakita Endo cut down Matsu Ino, who I had started a vicious taunt in the court, calling him Matsu Inu. The Lion Dog, may he be remembered with shame. On the mechanics: I like the roll & keep, but I don't like raises. Much the same way I don't really like taking dice out for difficulty up front in World of Darkness. I think I might just house rule difficulty to require extra successes. In the end, Aniko & Ryohei were re-united & married & they all lived happily ever after...except for the rank of Taint Ryohei gained...
Collapse