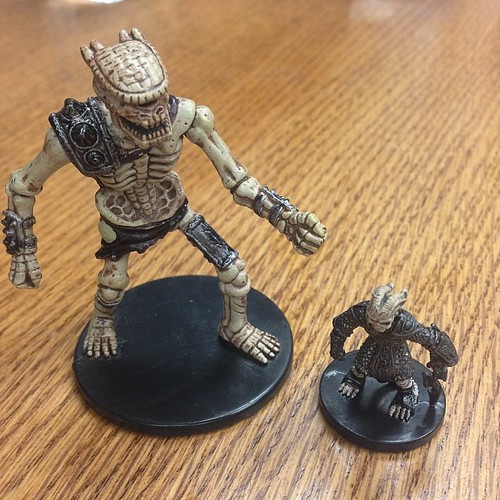 Guess who's back? The triumphant crew of Tor DnD strike back, that's who! Dungeon Master Tim said the word & after a lot of back & forth on scheduling-- of which I was one of the roadbumps-- we landed a session. I'm playing Pantalone the clown wizard, tiefling jester & enchanter; Bridget is Columbine, my adopted tiefling daughter, the light-fingered rogue to compliment my loud con job. We're joined by Wren, Irene's hummingbird accompanied ranger, Sir Aegwyn, half elf paladin of the elven god of trickery-- which explains why he suffers fools like Pantalone-- & Sam plays Kit, the friendly cleric, caretaker of orphans. We'd previously busted down part of a kidnapping-&-cultist ring, rescuing folks & killing a mid-level capo, but the lieutenant had a boss out there somewhere...so it wasn't much of a surprise when Il Capitano-- the town's captain of the guard who has a name which of course Pantalone ignores-- asks for Kit & Pantalone to come speak to him. Everyone else tags along, of course. Detect magic, Identify-- the captain has a crystal, a dark crystal, a scrying crystal with a more than a hint of necromancy to boot. Why of course, it is the tool that the bigger fish sent to the little fish we'd already caught. We'd intercepted it from the orphans, & one of them filled us in-- the drop-off was made at an abandoned mausoleum, one of those strange half-graveyards that exist contextless as the city grows around them. & so of course, we knew where we had to go...all we had to do was dicker over the fee. 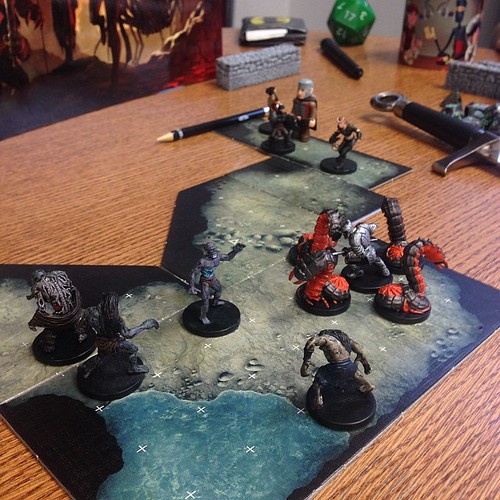 Right up front, there is the usual trepidation. You guys go check it out while the wizard hides behind a wall, okay? Sleuthing is getting us nowhere, so we try the direct approach. A botched roll & a failed save later & Columbine is cursed. Uh, sorry kids, hold on for a moment, we've got to run to a temple really quick & get a remove curse spell. 200 gold? Ever since we dithered with the captain for our fee the joke has been about the greed of clerics...but you know, there's more than a kernel of truth under the teasing. Clerics, the insurance companies of fantasy gaming. "I mean, I'd love to help remove blindness from you, old man, but that's a whole spell slot, & if I cast it now I'd have to memorize it again tomorrow so I'm going to need a usurious amount of gold that no serf could possibly afford, okay?" So we return, crack the seal & wouldn't you know it-- the pit goes down. To a dungeon. I for one am simply shocked! Ropes out, lights up & down we go!

Two brawls ensue. The first: a pack of ghouls & a swarm of giant centipedes! I'm vaguely not useless, but the paladin gets in the middle, takes the beating, while Wren & Columbine's arrows deal with the rest. A colour spray helps a bit...but just a bit. What really does the trick is turn undead. Every time I ask Tim what I know about a monster-- like do I know that ghouls cause paralysis, or about troll regeneration-- he says everyone knows that, which makes it easy to not "metagame." Which comes in handy in the next room: as the man says, they have a cave troll. & a wizard, best of both worlds; a regenerating brute & someone to conjure more minions while providing artillery support. The wizards tosses bones from his pockets on the ground & voila, skeletons! & then again, giant skeleton! 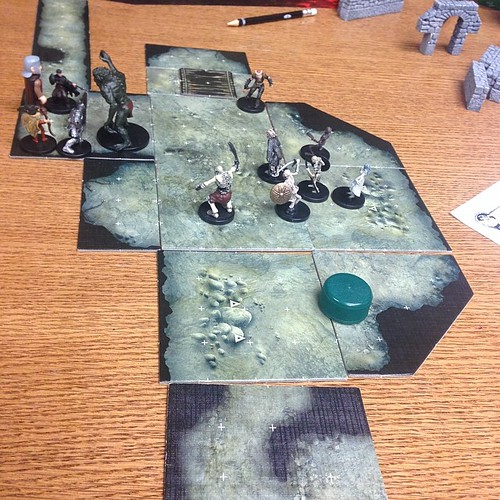 Hey, I know what he's wearing, he's wearing a robe of bones, the necromantic variant of the robe of useful items. Big fan of both. Eventually, between Aegwyn dishing out & taking a beating & Kit's healing him, the troll goes down. In the same round, the wizard finally bites it, Wren & Columbine finally finishing chipping away. Pantalone? No luck with his higher level spells & while colour spray is not useless, I need to spice it up. I was looking at the rules with Sam; we'd been doing spells wrong, & I've been wasting slots memorizing things I should have been casting as rituals. Fiddling with that, & gaining a level or two, should help. I forgot my miniature & the group treasure list, & since I volunteered as treasurer, that's no good! I'm going to record it here for posterity just in case such a tragedy should ever befall the group again.

464 GP (includes the minus 200 GP from remove curse)
482 SP, 15 CP
2 diamonds worth around 50 GP each
Pearl necklace worth around 100 GP
3 Books of Kord
2 Scrolls of Kord (Edit: these were identified as the Scrolls of Bless)
Potion of climbing
Scroll of Bless (used by Kit this session)
Scroll of Bless (Edit: as according to my notes we had two)
Broaches of McDolan's.
Collapse