The Spy Who Came in from the Cold by John le Carré.

Berlin Wall story?
Hedwig & the Angry Inch
is more how I roll.

I wasn't all that impressed with The Spy Who Came in From the Cold, ultimately. Since this is a spy novel, there are pieces of information you aren't given, purposefully, to drive the story, so consider this your spoiler alert. I had an evolving opinion as I read through the book, an opinion that wasn't really settled until I reached the climax. You know, I take it back, even after that-- up until the coda. I don't know that what I have to say would make sense to anyone who hasn't read the book, but since this was for Rasheem's pick Eleven-Books Club, I will pretend to be operating under the assumption that everyone has. So what did I think? I thought the final plot twist was going to be Liz; I though she was going to, you know, pull off her proverbial rubber mask & reveal that her actions were actually the keystone for the real operation all along. Nope! Wishful thinking. No, she's a cardboard stereotype. Oh such broken dangerous men! & the women who love them! I mean, I can't be too snide about it, I totally played that game when I was single, but then, it is illustrative to note that I married the woman who called me out on that nonsense.

So yeah, that was a disappointment. I have to try to moderate my instincts, when it comes to the very end of the book, because I just want to roll my eyes. "& then they all die at the end, to the max!" is a clumsy cliche. Maybe in 1963 it wasn't so tired, but that is a prime case of one of my pet peeves, letting feel-bad melodrama substitute for a real story. Oh, so I guess a thing that is weird is that my father used to work in counter-intelligence in divided Germany? I don't have anything to say about that really-- my uncles gave him a hard time because he was a Cold Warrior, he missed out on Vietnam-- but it meant I had a lot of German military surplus growing up. Coats, blankets, a flight suit, you know, stuff. Probably my favorite single part of the book was when one spy noticed another spy smokes his cigarettes backwards, so the logo burns off first...just like he does. A little detail can sell a lot.

The problem with The Spy Who Came in From the Cold is simply that it was too successful, too foundational. Everything in the genre pays homage to it or is influenced by it, so going back to read it is just in the wrong context. Maybe when it was published the feel-bad everyone dies ending was fresh, & maybe the book would have blown my mind if I hadn't seen tons of spy movies & read a couple spy books in my lifetime before now. I enjoyed this book, so I don't want to slam it, but the banal sexism of it & the fact that the good ideas of it have been spun into tropes kept it from going over the top. After book club, a bunch of Jennifer's former co-workers came over while some of the book crew stayed & some left, & we played games. A round of Snake Oil that Dan won, & then we split into two groups. James wanted our group to play The Ungame & eventually everyone drifted in to join us. What a weird game. Or well, what a weird "game," since it is really just a "talk about your feelings" tool for home school parents, right? I figure that is the core demographic, because the secondary demographics are hippies & fundamentalists. 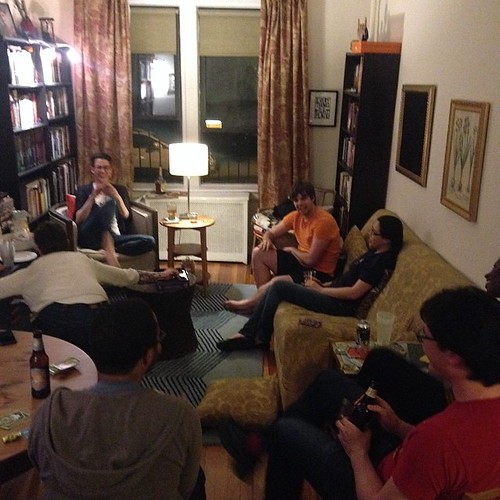