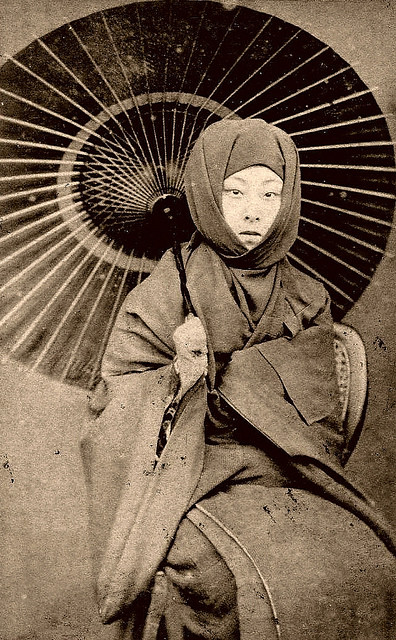 (Mori-kun of the Cult of Yama; Geiko Era Kayo.)

Thursday I ran my Oubliette campaign. It was a pretty unfocused session, but luckily we all realized it right off the bat; just work frazzled, kid distracted, sleep deprived, that sort of thing. That actually worked out just fine, ultimately: last session we'd been talking about Virtues & Vices, & I had be promising them a chance to re-spec their character traits, which we'd discussed a little over email, so we just started there. Actually, I take that back: before that, we started dealing with the dribbles of the Supernatural that have started coming through the cracks! When the group encountered a naga as children, I gave them all rewards befitting their actions. Some of them choose treasure & some of them had blessings bestowed on them. In the latter case, I had them add a Character Trait to their sheet, like "Poison Blood" or "Naga Kissed." After last session, the Player Characters started developing other "powers"-- or developed them to the point where I thought they should go on their character sheet-- & this time I had them write it under the "Special" section of their sheet.

I mention that because we're circling in on how Traits will work & how to pick "good" ones, which is to say, actionable ones. The core mechanics are to provide an organic way to specialize, diversify & empower characters & to reward players for having their characters make suboptimal in-game decisions. Some of them are big, some of them are little; some of the rewards are big & some are little. Roleplaying games have referees in the form of the Dungeon Master; seems like you should take advantage of that. That's why I like robust & elegant core system paired with a flexible & abstract interpretive mechanic. The foundation is strong & it combines in complex ways. I expect to continue in this direction in subsequent campaigns, with further tweaking. Maybe I'll collapse Character Traits, Backgrounds & Equipment into one framework, with Special Traits purposefully ad hoc?

So we cleaned up the character clutter; got rid of some Traits that never came up, took some off that made sense in the original character pitch but not in what actually was played at the table. Virtues & Vices were included; much like I'm wondering what separates Character Traits from "Special" & wonder what separates Virtue & Vice from other Character Traits. Maybe there should be more than one "Trait" category? I don't want to completely devolve into lists of traits, though; I need to come up with a mechanic that encourages a degree of minimalism. Maybe instead of giving everyone free traits-- "you met a god, here, have this!"-- I should be offering them the chance to swap? It could indicate an epiphany, in that example: "I get rid of my Trait of Alcoholism & I take Naga Kissed as a result of theophany." Just continuing to think about Traits; the concept has proven itself, so it is a pleasure to refine it. I know that was a lot of esoteric musing-- I'd like to think some other gamers beside me & my group might find it at least interesting-- so let's talk about brass tacks.

Lilly's bushi, Amina o-Kitsune, went through the most changes & is still in flux...but I don't have her character sheet in front of me. Lilly likes to hang on to it, which I get, because I'm the same way. She's got three Traits we need to renegotiate, though her Virtue & Vice were decided at least. For Ren Jokoizumi, Eric didn't make any changes, but...well. The camera faded out on Ren & the mummy of the Royal Physician kissing, the way cinema telegraphs a sexual interlude, but we brought the curtain up a little over email. As things got hot & heavy, Ren saw, like John Webster, the skull beneath the skin. Not that the illusion vanished, but that he became aware of embracing a thousand year old corpse whose withered skin was plumped up by swarms of scuttling scarabs. Ren, geiko trained, doesn't flinch, & so he's down a point of Humanity but gains the Special trait, "Lich-loved." Which, if you are keeping track, is sort of a thematic feat in Oubliette. Keku no-Kin, Nicole's character, asked the undead Physician for help integrating her cybernetic implants; since Nicole couldn't make it, I just had her break into a fever & faint as her metabolism goes nuts.

Silissa's character used to be called "Moe no-Cho," but she has accepted her role as the reincarnation of the Royal Physician-- the same Ka, reborn, her Ba & the Ba of the mummy linked by a shared soul-- had some shuffling to do, as well. She added "Past Lives" to her Special Traits, to represent her burgeoning connection to her previous incarnations, & "Healing Heka," to stand-in for how her already copious knowledge of medicine & herbalism starts to combine with her metaphysical insights. That's right-- I think this marks the very first time I've let someone have any healing magic in Oubliette. No wait; there's been other high level healing magic. That's the crux of the matter here: she has potent but high cost healing magic, not cure light wounds. Silissa changed her character's Virtue from "Determined" to "Sacrifice" & specified her Vice from "Reckless" to "Reckless (Self)" which reflects her willingness to, say, cut off & eat her toes or accept her doom as a living lich's phylactery. Haru o-Kitsune, Luke samurai, changed his Virtue, but not as a retcon; he changed it to "Voracious Mind" to reflect his loss of Humanity. 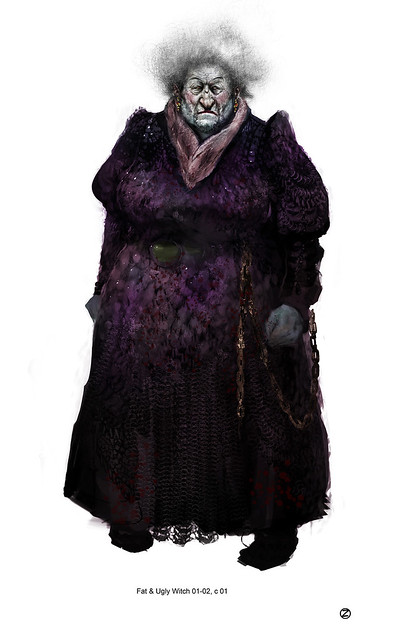 (Nana of the Cult of Yama; Hansel & Gretel concept art by Ulrich Zeidler.)

The session itself was short, for a couple or three reasons. One, as mentioned, unfocused. Two, I want to move things along to the auction-- the frame story around the Pyramid delve & the whole reason they are here-- but didn't really want to kick into it without full attendance. Which, actually is a small issue, now that I think of it: Eric & Silissa have been bringing their baby, Indigo, to game, but she's gotten old enough to get out of "the baby is a lump" & into a more active age. Which make her cuter, sure, but more distracting, so they're going to switch into an alternating attendance schedule. We'll see how that evolves. The third reason is...well, I guessed wrong & prepped stuff that the party decided to skip. You know how players are, there is an Inverse Law of Preparation. The more time you spend on an adventure or a dungeon, the greater the chance the PCs will decide to just burn it down or ignore it.

When they first encountered the Cult of Yama-of-Many-Faces, the group all seemed really into it! I mean, we've got two blood magicians, one of whom already has a "mask" thing going on, yeah? Plus a lich-loved entertainer & a reincarnated mummy (well, technically mummies, since she has had many mummified incarnations)? I figured they'd all jump at the chance to get in with the old goth ladies who run the joint! I predicted wrong; I think "horror fatigue" from the Pyramidal Tomb was a factor, but besides that, everyone is sort of full to the brim with loyalties. I'm not cranky that they skipped it-- maybe they'll revisit, maybe I'll repurpose some of the material-- but it cut into my options. Frankly I probably should have just run the game later, cut them loose & improvised; that can end up being the most fun part of a campaign.

What actually ended up happening is this: we started with the Players exiting the Pyramid, into the central shrine of the Skull Pagoda. The idol & the entrance into the Pyramid is there, & Haru has noted that a powerful ley line runs right through it. He calls to the little boy who lives in the temple, Mor-kun, he he brings the two old women who are all that is left of the order. The skeletal woman they've already met, Osamu, who is very "there, there dear" in tone; with her is Nana, a larger woman who smells like formaldehyde & the cushions of a couch abandoned curbside. She's more paranoid, less friendly. Roleplaying ensues. Haru barters-- the urban Houses are so...mercantile-- to "borrow" a mask from them in return for a sizable donation. He's already promised to send them an acolyte, so he can send it all back together. Amina, on the other hand, gets yelled at for asking similar questions, & she can't figure out why. Still, the more she talks the more they seem to warm to her, whereas with Haru they seem to have plateaued.

The Royal Physician-- it will get less confusing to call Silissa's character that the further out from the Pyramid & the mummy that they get-- is concerned for Mori-kun, seeing herself being taken from her parent's herbalism shop to be raised by the Cho Zaibatsu in his apprenticeship to the death cult. She speaks to him but he is shy so she...hypnotizes him. In a "mundane" way, that is, in the same way that hypnosis is a thing people in the real world are able to do. The kid seems to be struggling with her questions-- why would he leave, where would he go?-- & the Royal Physician, in essence, is asking the child if he wants to come with her, if he wants to be her son. It is a touching moment, but then, since he isn't very deeply under hypnosis, she decides to drug him. What! Under the effects of mesmerism & narcotics...a deep, strange, rattling voice comes out of the child's throat. "CHOOSE. THIS ONE OR THE MAN GORO. ONE WILL BE DEATH." (Hey, didn't the sand golem of the Royal Physician say something very similar to that?) With that, the group pulls itself together, says their goodbyes, & leaves.

This is one of those books I know going in I was going to like to such a degree that I worried that it would bias me. Nicola Griffith rules at writing, we are internet pals, & that totally tilts me. Luckily Hild rules, it rules so hard it is self-evident, so I don't really have to try too hard to present an objective appearance. Do you like Game of Thrones? 'cause if you like all that jockeying for the throne, this is the book for you. In fact, I can feel the salivation of the marketing folks who got to market it as such. I personally am on the side that says A Song of Ice & Fire is a major gender role critique, where there moral of the story is "misogyny & rape culture is the norm, & that is a bad thing," but Griffith posits a happier-- & equally plausible, pessimism & nihilism aside-- of alternate paths. Of power & submission & control, of reason & & faith & superstition, & the intersection of all of three. I would be remiss in discussing the book if I didn't mention the language. You can choose to ignore the use of historical language, to follow the context clues, & you'll be easily able to keep up. If you are a language nerd-- which I am not really, despite some modest interest in linguistics-- you can dig a little deeper, & appreciate the depth of the research Griffith put into this. There are places where she paraphrases Atwood or sings "Do Your Ears Hang Low," playing lightly with anachronisms, a flash of Alex Bledsoe's Eddie LaCrosse books. Griffith is telling a serious story using ever tool available to her, every faculty, & it works. The lives feel lived in. As a parting note: I really want Nicola to do a similar historical fiction take on Hildegard of Bingen; that's not a joke at all. Hildegard of Bingen is fascinating, on so many levels, from the Sacksian migrane stuff to the lingua ignota. A whole H series.
Collapse