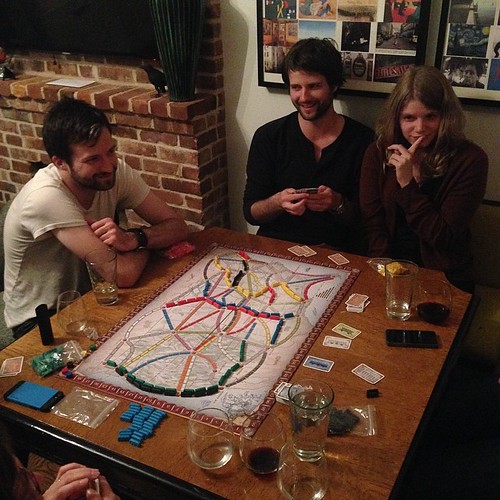 So Leigh & her boyfriend Ross are in town because she's got a movie coming out, & they stayed with us for the last bit of the week. Not that I saw them! Between California time, them being here for work & me feeling under the weather, our schedules didn't line up until yesterday. Jennifer has been a trooper, going out till all hours, but I don't really roll like that. I'm not interested in a good time! But managed to have one despite myself, on Saturday. We woke up & went to brunch with them & Kira & Nino & Olivia & Ross' identical twin brother Matt. Benchmark, my suggestion, & pretty well received. Neither of the cocktails I had were really worth mentioning, though. Then we all waked over to the Botanical Gardens for the Cherry Blossom Festival. Dang, I just had a Shogunate holiday in Oubliette or I might just lift Sakura Matsuri. The trees weren't in bloom-- the meteorologists or botanists or somebody guessed wrong-- but I don't mind. Plus, the place was filled with cosplay kids, which makes me happy. Go on, weirdos, fly your freak flag. Then from there we hung out at our apartment for a little while, parted ways with Olivia & Kira & Nino, & went to Terroir for dinner. No bone marrow toast, but the spaetzle was good...not as good as the fried chicken, though, which was thin & curled like a freshwater fish fry. Also, sherry! I like the way that place reps sherry, hard. After that, back over to Nino & Kira's apartment for a game of Ticket to Ride. We went late, but we all kept plugging away. The game was very close. Jennifer & I were on a team & our keystone routes were Seattle to Los Angeles & Seattle to New York; the latter is a pretty long route & thus worth a lot of points...plus it really helps get you "Longest Route." Which is why we won; we were third on the scoreboard until we got all the bells & whistles. Now Leigh & Ross are gone but it was cool having them here; maybe Leigh & I will start being better friends again? I'd like that, anyhow. (Photo below by Leigh.) 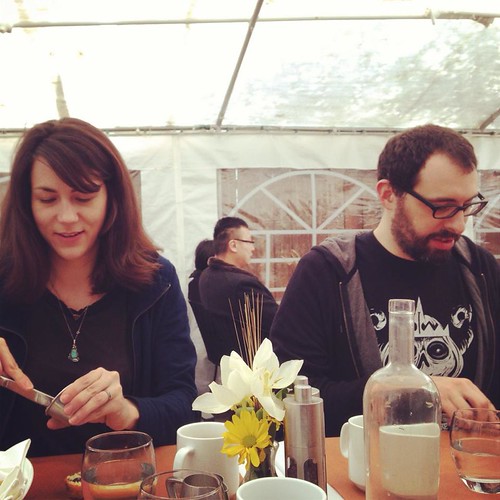