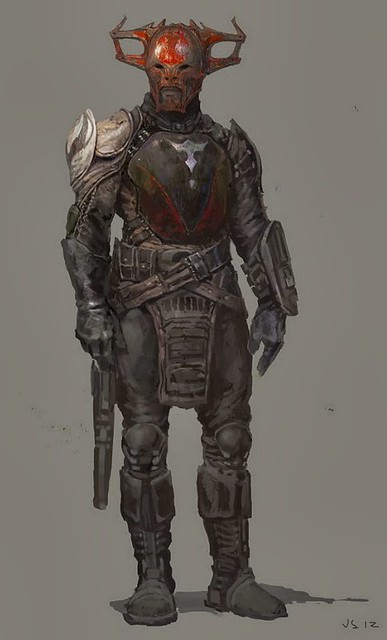 My Oubliette campaign is right on track. Full attendance at game, for a nice chapter end to the Story of the Tomb of the Royal Physician. Last session ended with the players awakening the Royal Physician's Ba & adorning her with a Scarab Amulet that contained her Ib, her Heart, upon which she clothed herself in flesh, scarabs scuttling onto her body, & she sent the players in search of her Shadow, below. In between sessions, Nicole's character, the cyborg zaibatsu agent Keku Kin bought another dot of Melee; "you are pretty stabby," I agree. Ren Jokoizumi, Eric's character, the former urchin, now taikomochi, spent to get another dot of Larceny; between the two of them, the "rogue" role-- assassin for Keku & thief for Ren?-- of a traditional D&D party is filled. Haru o-Kitsune & Amina o-Kitsune, Luke & Lilly's noble cousins, the courtier & the bushi, have both embarked on the path of Blood Magic. I have them both write "Bloodspeaker" on their sheet (& as a little acknowledgement to Legend of the Five Rings) because well-- that's what they've done, they've talked to corpses & golems & demon gods with blood magic. Haru, who has lost two Humanity, to Amina's one, you'll note, also gets "Woundstealer," for transferring Amina's wounds to his own body. Congratulation, now that is a thing you know how to do, Haru. Our "antipaladin" & "cleric." & of course, Moe no-Cho (for now), Silissa's herbalist gone corporate, was the cleric for a while but leans toward "wizard" now. She believes she is the reincarnation of the Royal Physician. The others believe she is possessed.

They swam for it, under a door ajar, & came up to...Keku saying that her cyber-eye was picking up something ahead. Down the hall, slick & wet from the flooding? Goro! Goro Tako, the whole reason they are here, the coward bully from their childhood encounter with the Naga, who ran away rather than go with them. The boy who grew up to be the warlord whose arms deal brought the party to Kakusui-en, & to the Pyramid of the Royal Physician in the first place. "It's the Shogun's Birthday!" Every Shogun's birthday becomes a holiday, the sweets & gifts holiday, sacred to Tajimamori, the Confectioner, the kami consort of Jorogumo, the spider queen goddess, who wooed her with sweet words & sweeter candies. & thanks to Carmen's gifts of Japanese candy for Eleven-Books Club, I can bust out props! The small celebration heals all of the party's bashing damage, & Goro wants in on this whole "kill the monsters, loot the dungeon" action; he's taken somewhat aback when the party is like "actually, we've sworn an oath & are on a quest for the mummy," but Goro just decides to tag along, either way. 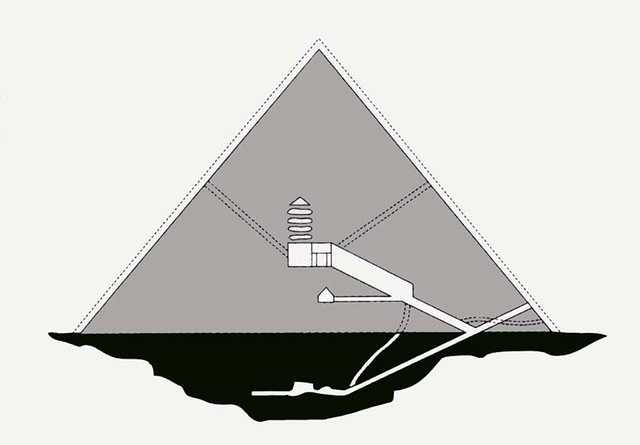 (The Tomb of the Royal Physician: map of the Pyramid of Cheops at Giza.)

On the way up to the Physician, Ren pried an metal bar out of the wall, part of the circuit of a lightning trap. Now, with the trickling water at their feet, they make sure it is still disabled, then disable its counterpart: going down there was a negative energy black Kirby crackle, & Haru remembers that & Keku dismantles it with her wrist tools. Look at those smartypants! Above, the walls were covered in bas relief, faded colours that brightened, with a gold gilded figure central. Here, the backrounds were golden, & the figure black. It leads to a frosted glass door. The party pushes it &...gas! Blisters, gross fluid-filled pustules, start forming on their lips, their eyes, their throats, their lungs, as a yellow gas jets into the room. Haru grabs Amina & bolts, saving her from the worst but keeping him from avoiding it entirely, & so everyone-- except Keku with ther cyber-throat!-- gets attribute damage. It stays until all of their damage is healed, penalizing their physical attributes pretty heavily. 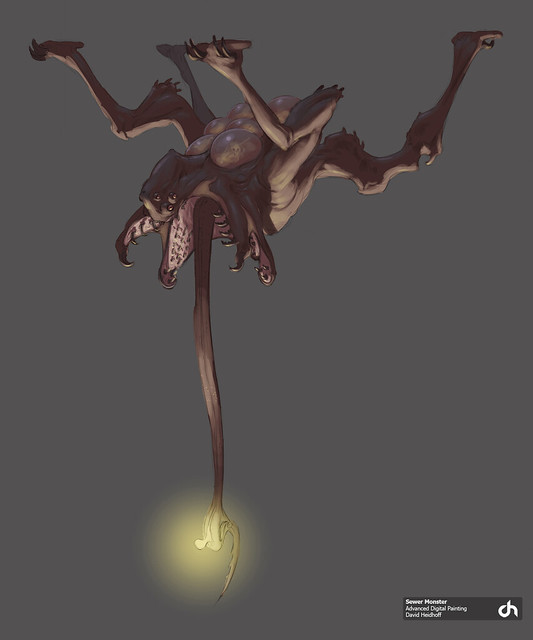 (The Demon in the Dark; Concept art by David Heidhoff.)

The Demon in the Dark doesn't want to die! I'm getting ahead of myself. See, once they enter the room, they see a dull, lusterless golden glow. Nearer, it looks like a pile of those golden pills, like what Ren used to heal Moe, like what Amina pulled out of Moe's research assistant & fed to her. That treasure horde, however, is an illusion! A monster on the ceiling is deep sea angling with a bioluminescent tongue! & the fight is joined. It didn't get to drop on someone's head & decapitate them-- I think I need more potential one-hit kill threats, right?-- but it globs Keku with adhesive spittle & gets a corrosive tongue around Goro's arm, though his armor protects him for the moment as it sizzles on the metal. Things turn against it from there; Keku nails it with a molotov cocktail, the nobles are all drawn swords-- only aristocracy carries swords, of course-- & worst of all, it claws up Moe...& gets her poison blood all over it. It is keening & weeping & backing away & in broken language begs for its life. "please, no no hurt, i help, come with, no, noooo..." beyond it is the Palette, which they take (it grants +1 to all Social Attributes), & the broken weeping demon is so moving that...Amina lets it crawl inside of her pet fox with a slurp, forever, becoming her familiar. 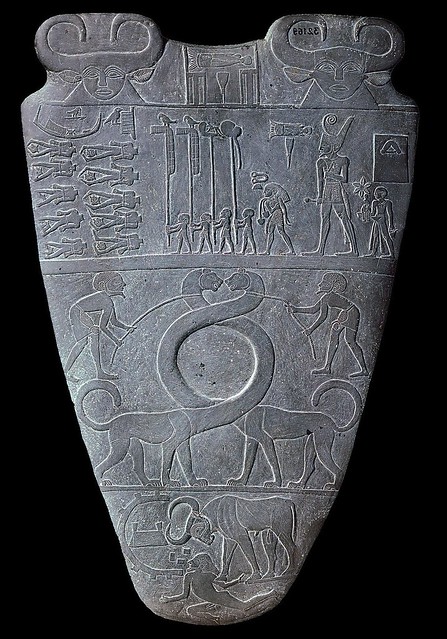 (The Sheut Palatte; Palette of Narmer.)

The bring the Palette to the mummified Royal Physician, cracking wise about her "Shadow" & "eye shadow." Given the dollop of kohl she puts on first thing, they were right on the nose. Her Vice is Vanity, after all. Read the following aloud to the players: I have but a little strength, gathered like dew in my blue pyramid. I burn brightly...but for just a little while. Some of us choose to be dusty hags, lurking in their crypts; some to be forces of nature that rise when the stars are right, some just whispers, forever. Some retreat to the Land of the Dead, one even went Mad. Moe is her Ka, or rather, her Ka is Moe, or rather, when Moe forsakes her name, she will be unfettered, free to become the Royal Physician. The Royal Physician explains that the Wheel has turned; at this crucial time in history, the gods will be incarnate. The party, having met a naga as children, find this plausible. This is the era for that! She wants them to paint her pyramid blue again; they demure but Goro is happy to do her that favour. He's got the manpower, for one thing. The Physician adds that when she called Amina the Devil's Bride...perhaps she should have said "Devil's Mother." The mark on the child will show the way! She kisses Haru & Amina on the brow, healing them with some of her own hoarded Sekhem. Keku asks, instead, for help understanding her Al-Kem cyborg implants. Ren, with his Eshu-like sense of timing, wait for the others to finish & then moves in for the seduction; he's hooked up with a snake goddess & now with a mummy! 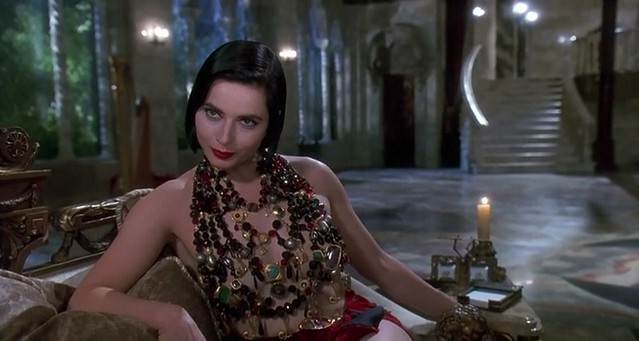 (The Royal Physician; Isabella Rossellini from Death Becomes Her.)

Mechanics theorizing: think of Virtue & Vice & how you could use them in combat. This is a good benchmark for understanding I think. Say, Sloth. You are in a fight, strapped for Willpower. What do you do? Take a turn off, resting, catching your breath. There. You've done a suboptimal thing for your character, because of your character's traits, so get a point of Willpower back. Or if you had Cruelty & mocked your opponent, or if your Virtue was Honor & you let the villain you've just unhorsed & disarmed collect her weapon while you dismount. Basically, rewarding you for interjecting roleplaying into the combat system. Being in combat is one of those moments where making suboptimal choices is most easily made manifest, & it is also a time when you might really, really need more Willpower. I've been working with the group on Traits; some of them have been working well but without the "negative" side surfacing, some of them worked well in different contexts-- like Amina's drinking problem is usually in full swing when she's being social, since they were exploring a tomb she's been sober-- & that is okay, because that is how faceted characters work. I don't know if there are too many or if I've done a "suboptimal" job of explaining it-- har har-- or what, but it is very close. I think it is starting to really click with Nicole now, which spurred me further into thought. I'm going to have a follow-up with each of the players & I think we'll renegotiate some of them now that we've all seen how they play. & oh! Rachel won an award for her Standpoint Theory, & she listed Oubliette as an inspiration, so that is pretty cool!
Collapse