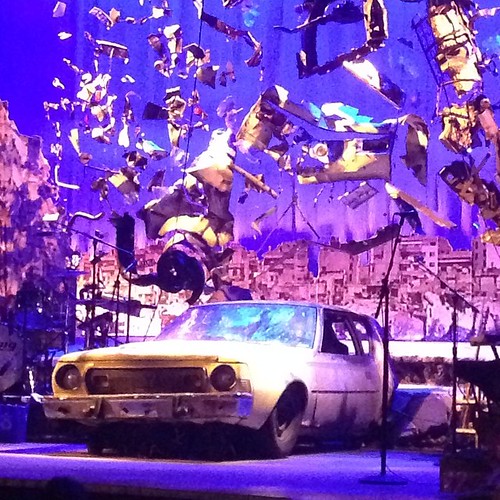 Digesting the politics of Hedwig & the Angry Inch is complicated. I like it, but I certainly don't think it is above critique. Nor do I think critique destroys my ability to like it. & for that matter, I don't have to agree with critique. Like, when people say that the ending is transphobic because the wig ends up on Yitzhak's head, on a cis woman. Except, you know, that overlooks the fact that the show cast a woman to play a man's part & spent most of the time undermining the binary. Then again, signs & signifiers, it does have an impact. Then again, was Yitzhak always played by a woman? I know Hedwig had male & female performers over the years. So I guess my point is, I don't have answers, or a thesis, but I'm open to discussing it. Like, to me it seems like John Cameron Mitchell's Hedwig & Neil Patrick Harris's Hedwig is an interesting look at "passing"-- John Cameron Mitchell, who was there last night, is tiny & has a small frame, Neil Patrick Harris is tall & built-- but right, I don't have a thesis. Or the skill set to really create one. Just an observation. Is the conflation of drag, trans, immigrant & queer issues a mish-mash? Well, yes. Is the ending problematic? Sure. But to me there is a value in that confusion. Trans stories are usually "boy feels 100% like woman. Struggle, magical surgery, now the binary is reinforced!" Or you know, it is possible I am just making excuses for something I like. Cis guy apologetics. I just think hey, if a piece of pop art leaves you wanting to have a discussion...good? How did I like it? I think Neil Patrick Harris hit all the loud parts but wasn't up to the movie for the quiet parts. I wasn't cool enough to see this in the late 90s when I was coming to Metropolis, so I can't compare it to an early stage show, & I have a lot of devotion to the movie, so again...acknowledging biases. I will say that NPH as Tommy Gnosis was a great fit; the "Barney" persona taught him a bunch about sleaze. Lena Hall can sing like heck. The best part was when Hedwig was interacting with the audience & licked a guy's glasses; you know "it's a carwash, ladies & gentlemen!" but then she took it up a notch & I laughed out loud. Rolling on floor. Oh & the Belasco Theater? That's a really nice venue. & the use of a transparent screen to project animations for "The Origin of Love" worked super well. Anyhow, happy birthday to me.
Collapse