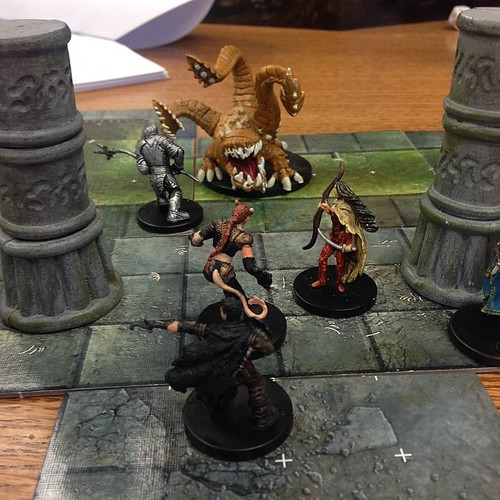 We sought adventure, & we found it! Last session, our heroes found work investigating a kidnapping, & we descended into a sewer-dungeon of Tim, the DM's, creation. Whenever I share a picture of this campaign, someone invariably-- & rightly!-- asks me about the furnishings. All the pillars & decor are made by Tim. The rest of the group is: me, as Don Pantalone, tiefling jester-wizard, Bridget as my adopted daughter Columbine the tiefling rogue; we're joined by Scaramouche, my chickken familiar, Jonathan as Aegwyn the half-elf paladin of Erevan Ilesere, Sam as Kit the human cleric of Ehlonna & Irene as Wren, the human ranger with a hummingbird companion. The five of us-- seven if you count fowl-- explored an abandoned warehouse & after defeating the foes we found there, thanks to Pantalone taking a tragicomic tumble down the stairs & alerting them, we questioned our prisoner & climbed down the pit we discovered..& into the sewers proper. Poo water & all.

Exploring the sewers was fun. I have a saying-- "every stone golem or gargoyle is a potential statue!"-- by which I mean, I will play stuff on the map that would otherwise be suspicious, & then...nope. Players can meta-game by whether you are using the battle mat & they will always stay well clear of a statue in the middle of the room...just in case it is animated. Being a DM involves chicanery, & Tim is great at it. Was the little alcove we discovered just a red herring, or did we fail to discover what it did? Either way, it provided enough room for us to fight the....AHHH! Otyugh! Garbage eating horrors of tentacles-- two tentacles have teeth, one has eyes-- they are a classic monster. I don't think I ever fought one! But I did have the toy growing up, which is odd considering I wasn't allowed to own D&D books because Satan. The fight was hard: Aegwyn was grappled & dunked in the sludge, Wren & Columbine peppered it with arrows & I think both were at one point grappled, Pantalone failed to distract it but did at least colour spray the thing & magic weapon Wren's bow...but Kit was the most valuable player, pulling belts to give grappled characters Advantage, healing, just all around. When we slit open its gullet? A pearl necklace! 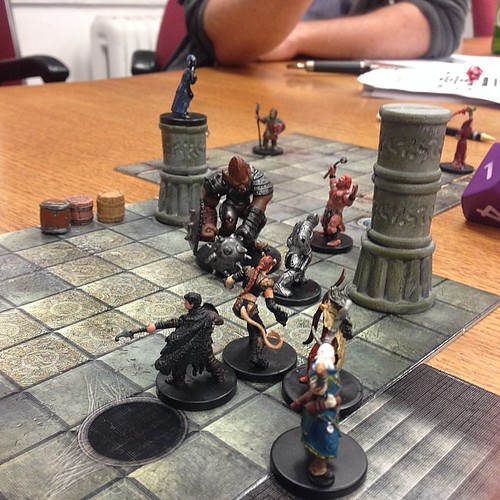 Down to the crypt & then further down again? Takes us to our final confrontation! We see the hairy, oily warrior & I think hey-- this would be a great opportunity to use my chicken familiar to draw him over so I can cast charm person! A chicken could find its way into the sewer, that would be odd but not implausible. Tim plays his NPCs smartly-- if outnumbered, they will bolt, if confronted with a con, they might suss it out-- so here it was mostly a matter of hoping the guy came close enough. He didn't-- almost-- but he did get his friends to come look too. When I say "friends" I mean, ogre! Fray! We charged in. In the room were cages with three kidnapping victims, & more foes. I was able to get the ogre with hold person which was a nice coup-- thanks, low Wisdom monsters-- that allowed us to take control of the fight early. A dark priest appeared, joining the conflict with his blasphemous blessings & negative energy attacks, & things got harder. The drow hiding on top of a broken plinth taking pot shots didn't help either.

Then, the man of the unholy cloth-- he worshipped...Kord? Which is unusual, don't you think?-- pulled a lever & dropped dire rats into the cages with the prisoners. A fight clock, hey, fun! Less fun? When the ogre goes down, the priest shouts "get your ass in here!" & ogre two comes lumbering out of the back quarters. Well, I'm mostly out of spells, so hello invisibility. Kit has sanctuary on, & he's a lean mean healing machine. Aegwyn get smashed by the fighter-- a critical hit on a great axe will do that to you-- but thanks to those spells he's back up. Columbine is a nimble little Muhammad Ali; she gets in there, stabs, & gets out again. It's racking up! Wren engages the drow, eventually toppling from his sniper spot up high-- not before he gets off a globe of darkness-- & then she takes the spot, raining down arrows. Pantalone, invisible, picks the priest's pocket, steals the keys & starts opening cages. I make it through the fight unharmed, though the second ogre's sensitive nose-- fee, fie, foe, fum!-- lets him take two really scary swings with his huge great club at me. Eventually, we win, free the hostages, loot the place, & return to the surface for our just rewards...of all you can eat at McArdy's golden arches! & one of the perks of playing with the guy who draws the Game of Thrones maps (#humblebrag) is that he can sketch this: 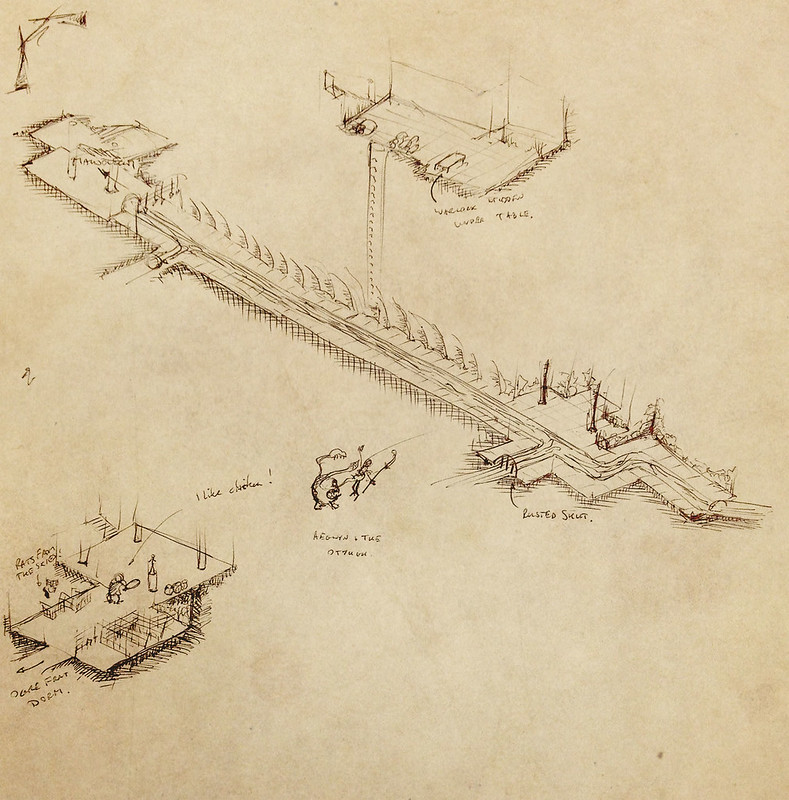 The dwarf fighter shouts:
"I shaved before it was cool!"
Her friends roll their eyes.

I reviewed Rat Queens for Tor.com in all its charming, bloody, fantasy RPG homaging glory.
Collapse