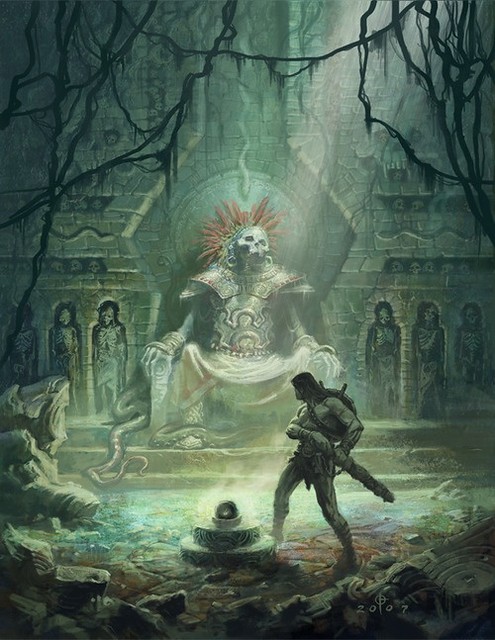 (The Tomb of the Royal Physician; art by Daren Bader.)

Last session, so many moons ago, our intrepid Kitsune nobles & their Zaibatsu allies passed through the Shrine of Yama-of-Many-Faces & into the Pyramid of the Royal Physician, & we rejoin them there. We've established that Ren Jokoizumi, Eric's urchin-turned-taikomochi, is constantly coming & going, appearing & disappearing. He's like the Emcee from Cabaret, so it doesn't really matter that he's going to be late; I'll just have him pop off & then pop back in when he gets here. Silissa & Nicole were the first to arrive-- it's not a race, & if it was, they'd have an unfair advantage, since we work together & left all at once-- & they are the Zaibatsu agents I mentioned. Moe no-Cho, alchemical researcher for the Butterfly Corporation & Keku no-Kin, the cyborg fixer working for the Gold Corporation. Luke &

fatbutts are next, as our aristocrats, Haru o-Kitsune-- bureaucrat, spy & occultist-- & Amina o-Kitsune, the oni-worshipping bushi. Music was Fantômas' Delìrium Còrdia & I think it was Luke who noticed that Thee Silver Mt. Zion Memorial Orchestra's "13 Angels Standing Guard 'round the Side of Your Bed" has been the leitmotif for the dramatic bits of the campaign so far. Good catch, because I've totally been doing that on purpose. Pizza, beer & sake round out the evening.

The game was heavy with player-driven drama, which you know is my sweet spot. Before we get too deep into it; first, they are pretty beat up. There hasn't been a chance to rest, & since the World of Darkness is pretty brutal with damage & doesn't have clerics, it sticks. I should probably do a tutorial on damage, actually. The group gets it, but the bashing, lethal & aggravated damage isn't entirely clear in their minds. Also, Willpower is pretty scarce in the group these days. I think the Character Trait system is working well, but I wonder if five plus the Virtue & Vice is too many? That is, it might dilute focus & overwhelm players? While I'm talking about mechanics, I accidentally spilled the beans about a mechanical "trick" that I had up my sleeve. See, I wasn't going to make Blood Magic a big part of this campaign, since I'm already ripping off Legend of the Five Rings enough for inspiration, but Amina & Haru have stumbled into it of their own accord, & last night I made the "mistake"-- not actually a big deal-- of saying that Blood Magic is an auto-success. I forgot I'd been keeping that under my hat. Like a lot of rules, though, it is probably best that it is out there in the open. It might be time to actually talk about putting a more formal "Blood Magic" system in place for them.

Having escaped a room filling up with scarabs & scarab larvae by using fire, & accidentally triggering a sand-powered mechanism that slammed the door shut-- but only after robbing the tomb of a heavy golden scarab amulet-- the party debated going down or up. When they entered, they had seen a path tilted downward, mirroring the upward slant they took; further up the slope, however, the hall widened into a gallery the size of a football field. As I said, this was a very role-play heavy session, with a lot of quick "asides," so events are somewhat difficult to discuss coherently. Keku, holding the amulet, feels the pull of an additional set of Virtues & Vices-- Vanity & Memory-- & Nicole uses that to good effect. I was really happy to see a player run with that. Moe decides to snatch the necklace from her-- she's no pickpocket, so she relies upon surprise & force-- & yanks it over her head. We go aside & she's once more speaking to the Royal Physician. What they discuss I will leave private, for now, even in this recap (where I generally speak fairly freely, because I trust my players to keep "out of game" knowledge separate from "in character" knowledge. 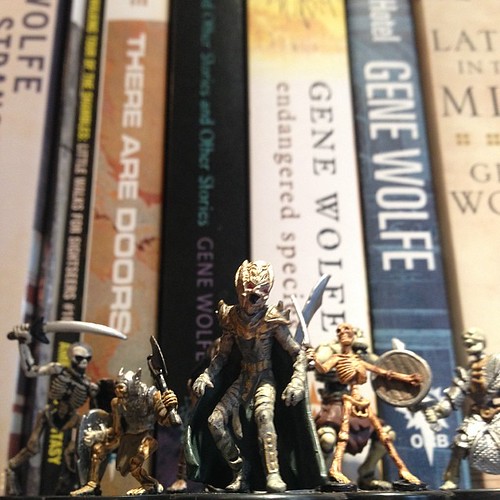 (The Royal Physician & his companions; photo by me.)

The walls of the place are carves with faded bas-relief glyphs & pictures. Steeped in the artistic styles of the Shogunate-- & failing at their Academics & Expression rolls-- the party has a hard time making them out at first, but Keku makes out that the door that slammed shut, the secret door into the scarab hall, has a group of magicians removing the heard of a woman. Amina & Haru, meanwhile wander into the gallery above, where the carvings on the wall are bright, almost glowing with paint-- or well, glamour-- with vivid scenes of the Pyramid & a city around it, a city that in one picture shows the people starving while frogs & toads devour the crops, in another a black vortex, like a tornado of hail & lightning, storms. Haru cuts his hand & invokes the Dark Arts, & Amina cuts hers & his & lays her hand overtop in a gesture of family solidarity. A failed & a successful Humanity check later (respectively) & there is a moment of vertigo, as the walls of the bas-relief dilate like a pupil, their blood spreading & pouring off the edge in a waterfall of blood, a torrent of red. They are looking down, now, on the Pyramid from a great height, & it is a deluge of blood, pouring from the sky, drowning the city around the Pyramid...which slowly starts to open like a flower blossom, growing impossibly golden bright & then--

They are back, & Moe's eyes are golden. Not just gold pupils, as seen when Ren fed her the gold pill & when Amina gave her the golden dribble from the corpse of Gale; now the irises are golden, as well. There is some disagreement & a clicking sound that only Keku hears, accompanied by the sound of rushing water. The party debates whether to go up-- which Moe is for, & Keku too-- or down, which Haru advocated for, backed by Amina. Ren shows up, with more torches, & just as he does-- good timing, Eric-- the door to the gallery they came in comes crashing down, clearly water-driven much as the last door was sand powered. & yes, of course, the room is flooding. Up it is; Keku is there with her clockwork expertise to keep that door from sliding shut! Up! Or it would be if, possessed of some unknown impulse, Moe mixes all the poisons, toxins & dangerous herbs in her satchel together at once & swallowing it down. She falls over in a seizure, frothing at the mouth, blood from her nose & then...still. The party freak, trying to resuscitate her with CPR-- which seems anachronistic but there was a pseudo-CPR in 18th century Japan, so I think it's actually in-genre!-- & every trick at their disposal. Eventually she sits up...but her heart isn't beating. They follow her upwards, into a room crawling with roots, vines & skeletons in wall sconces.

Finally, they are face to face with the giant mummified corpse of the Royal Physician. It speaks, mouth unmoving, in unison with Moe who echoes its words...& when Silissa speaks as Moe, the Royal Physician parrots what she says, as well. The conversation is, like any conversation with a millennia-old undead, enigmatic. They've spoken to the Royal Physician before, or anyhow it's proxies & avatars, like the sand golem, but this time they seem to be speaking to...more of a "person." They put the golden scarab chestpiece on the mummy, &...scarabs swarm into the room from the niches holding the decayed bodies, scuttling across the floor, into the giant skeleton & then...they seem to compact, to smooth, to settle into the shape of a nude woman wearing the necklace. She's still cold, undead, but there is more passion to her now. The Royal Physician, a lady as it turns out! She calls Haru the "Black Fox" & Amina the "Devil's Bride," & she says that she has no power over the Pyramid; they must bring her Shadow to her, from below. & so they go to do so...with Keku showing Moe how to use her tools & passes on her observations from keeping the door open...& still not-breathing Moe walks into the water. Minutes later, there is a tug at their ankles as the water starts to drain... 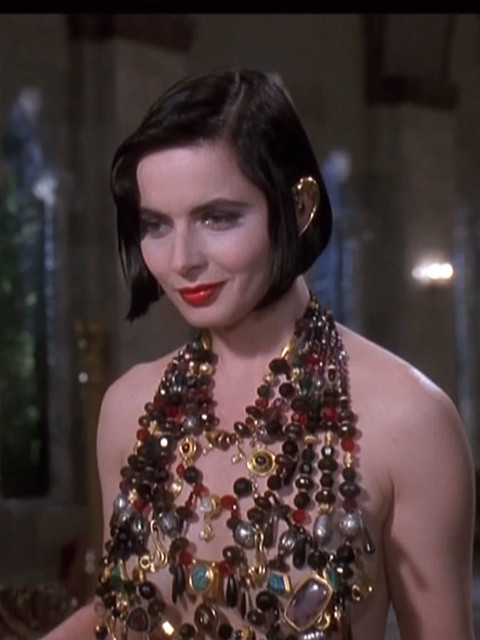 (The Royal Physician clothed in flesh; Isabella Rossellini from Death Becomes Her.) 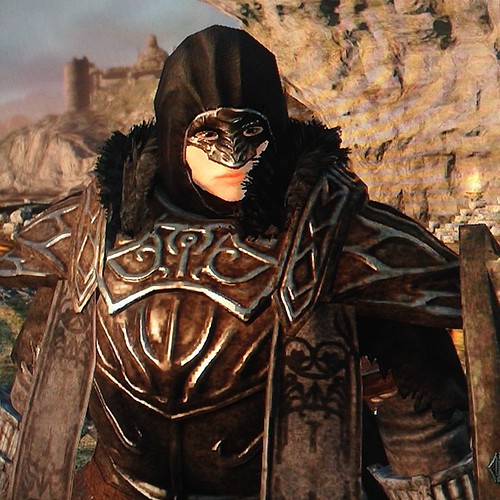 I wrote my playthough of Dark Souls II as a four-part game review for Tor.com. If you've talked to me at all this year, you know that I can't shut up about Dark Souls. It is my favorite PS3-XBox-era game by about a mile, & you remember how much I liked Skyrim, too. I describe it as ICO only instead of a little kid with a stick & someone who helps you that you need to protect, you are a dangerous killing machine & you still need someone to help & protect you. Rumors of it's difficulty are over-rated; it is hard, yes, but it is hard like an old NES game. If you die, you typically deserved it. Hard & fair. Oh, not fair in the sense that the whole thing isn't designed to cheap-shot you with a one hit kill trap that is hidden around a corner & oh, why not say, guarded by a ton of minions, no, scratch that, let's just use a miniboss from earlier in the game & make a mob of them. Just that when you figure that out, & go back later, & snipe them from across the room with poison arrows? You are totally justified. Two other things stand out, besides that it is gorgeous & fun-- that alone is enough to put it on par with something like Skyrim. One is the very clever conceit of the game; you are Undead, & when you die in the game, you don't just use video game logic to respawn at a save point. No, the game is autosaving all the time; when you die, you die, & are weakened, & are sent back to the last mystic bonfire you rested at, where your body reforms. & then? All your unspent Souls-- the experience/gold mechanic-- are left on the bloodstain where you died. You have to fight your way back there to reclaim them...& only your most recent stain stays, so you can lose them all pretty easily. Danger! Second, the co-op mechanic is amazing. Listen, I hate playing games against savant-like twelve year olds & couch-bound gamer addicts who just want to shout slurs while camping out & head-shotting you ever time you re-spawn. This isn't like that. So, in Dark Souls I & II, the world is flickering out, the Fire is guttering. Time & space have started to decay, to slip over each other, so that the last remaining parallel realities are clumped & crashing together. You are the Chosen Undead; but there are others, in other worlds. You can Summon-- & be Summoned by-- those other messiahs, to help fight in their world, & learn from them how to defeat the traps & bosses in yours. Or...you can be Invaded by them-- or Invade-- & see to kill the other to steal their Souls & Humanity. So listen, the whole thing is very fun. Go read about it if you like. 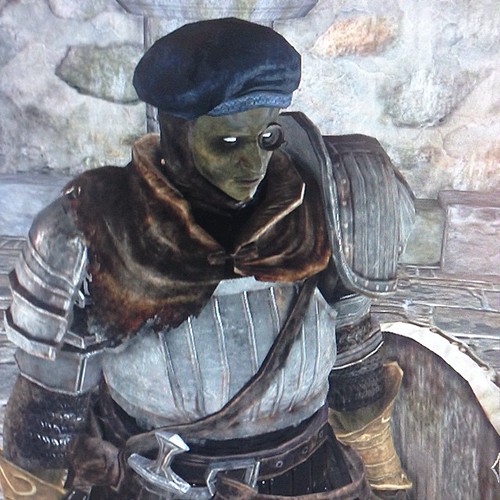