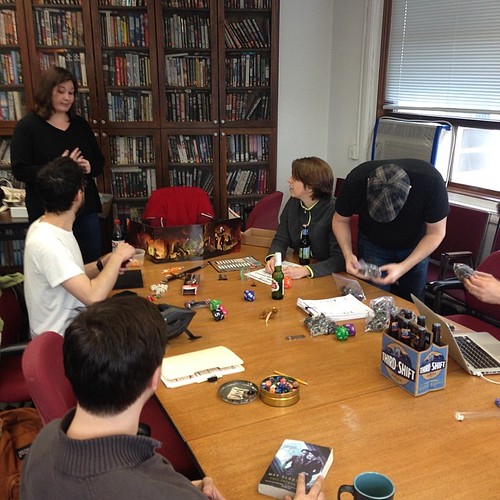 Bridget: "Did you let your beard get long just so you could stroke it like a wizard?"
Mordicai: "What, that's ridiculous, but of course, absolutely, yes. Meh!"

I managed to fall backwards into a Dungeons & Dragons game! I ran into, I think Bridget & Irene in the elevator, & they were like "so we were talking about that game & we really want to do it!" & I was like what are they talking about whatever it is I want in, "yeah, sure, start an email thread!" Only later were they like, "hey, that time we all were at that party & decided to have a DnD game, were you even there?" & I was like "nope!" Even better, Tim agreed to run the game. It is great getting to be a player for a change, & it is cool to see another ply their craft; I'm always looking at play style, & Tim rolls on the table, in front of everyone. One of those "you get what you see." I hedge my bets-- I fudge, but I fudge both less & more than I pretend, I fudge when it doesn't look like I did, & I didn't when it looked like I did. You don't know me, man. Anyhow, Tim's style has a brutal elegance to it.

I talked myself into playing the Wizard-- quite happily!-- & while my original character idea was going to be a gnome wizard, & then I thought "wait, that's Encre Panache! I can't play him!" & then I thought, wait, I certainly could, David as could as said he might have been resurrected by Liam, & I asked David & he said "sure." So then I thought, wait, what if I play a like, weird Gepetto gnome with a puppet son? & then I was like, wait I've got it, sorry gnomes-- I still think Encre is out there...-- & I went with Tiefling & I went with the Jester background & I was going to be like, a fake powdered wig barrister yes-man bantam. Until. I realize the best jester wizards in the world belong to the ancient & inscrutable, possible fey or possibly fiend, urges, Demiurges, Passions, the college of the Commedia Dell'Arte. & so my jester wizard was born, Don Pantalone, the fool who say the things man was not meant to say, who knows the things man was not meant to know.

Even better, Bridget & I this whole time have been planning on playing father & adopted daughter, & her rogue would parter up with my jester. A wandering duo. & when we walk in to play, Bridget says, "I still need a name," & I say "Oh, Colombine!" & so we are, Pantalone & Colombine! Or at least, that's who we are in my wizard's over-taxed mind, at the very least. I'm quite pleased. & our companions are Jonathan, the half-elf paladin Aegwyn who is much more...morally flexible than you'd expect, Irene as Wren, the human ranger constantly accompanied by k'Arl, her hummingbird, "played" by Carl who was sitting in, & Sam as Kit, the human cleric of Ehlonna. & of course don't forget Scaramouche, my chicken familiar!

Our first session starts with our characters broke, an intolerable situation for Don Pantalone, & the others too I suppose-- & in search of trouble what should we come across but "Reward: 500 GP." That's a lot of chickens. The deed? The city has been plagued by kidnappings-- ten all told, three nobles, two of whom from a house of ill repute, & worst of all, one found dead in the river-- & we convince the Captain of the Guard-- Il Capitano-- that we're the group for the job. Jonathan's paladin has a background as a soldier, & Pantalone is a officially licensed fool! I really like the Jester background, by the way, for making the role of the fool a legitimate way to play. I am to do so without being too disruptive. A fine line to walk, but I think I'm doing okay; at least half the time I try to use it to shift focus to another PC.

The first thing we do is question the urchins-- or Sam's cleric does, anyway-- but they are no help. They do, notably, smell bad. No really: our next stop is at one of the nobles, the ones who de facto rule the market place, & the son-- kidnapped & returned-- tells us his captors stunk. The mother also intimates that there might be an additional reward, but to discuss it would be...too bourgeois. "Is there anyone...more bourgeois in your household we could speak with?" says Pantalone, & then he & the butler go off to have an aside that rings, to me, like Shakespearian clowning, Malvolio & & his stockings. All of the clues we get point to this abandoned warehouse as central to the crimes, & so that's our next stop, when night falls, & of course we find...danger! The scouts do wonderfully, Wren & Columbine, the infiltration is going great, until...I botch a roll & tumble down the stairs like a buffoon. I warned everyone that the dice hate me, & this session is no exception. Maybe it is time for me to buy a new set of dice.

On the plus side, traditionally Panalone falls over backwards like a turtle & can't get up...so I'm really hitting my archetype. Down the stairs is a witch doctor, a berserker, & a trio of fighters. I burn though a bunch of spells, but in this iteration of DnD Next, instead of having infinite uses of cantrips, mages can regain spell levels with a short rest. Irene's ranger is all arrows, arrows, arrows; the paladin smites & tanks, getting the lion's share of attacks. Columbine flanks, Sam heals, & Panalone...well, I have Acrobatics & it would be cool if I could kip up off the floor, but remember my luck with dice? My hold person spell is useful, but cause fear & colour spray aren't. Still, we win the day, capture the last enemy alive & question him. I'm forced to cut off a thumb, for what it's worth. Panalone is shaken but his bluff was called & it turns out...he wasn't bluffing! 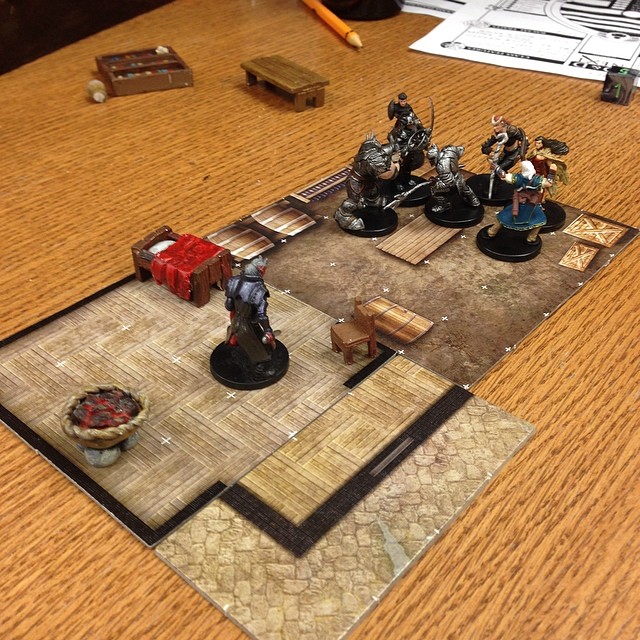