White is for Witching by Helen Oyeyemi.

O goodness gracious!
Underneath her skin, she is
a great ball of fire!

You know, this is the second time that a blurb on the back of the book has really been right on in our book club. That is, first off, this was Liz's pick for Eleven-Books Club. Someone on the back of The Dispossessed was like "such an economy of writing, everything is meaningful!" & they were right. This time, it was The Austin Chronicle, who said White is for Witching was the heir to Shirley Jackson. (It is also the second book in our book club to have pica as a crucial plot point, the other being Mermaid in Chelsea Creek. I get it; I used to be a little obsessed with pica, too; I still have story ideas floating around in my head about it, too.) I've only read We Have Always Lived in the Castle, but that is why I recommended it so heartily to

handstil. Seems up her alley, & it was up mine to but by means of another angle of approach: magic. This has some supernatural teeth. Like Among Others, it kind of messed me up in parts. I'm a warlock, I want to get in there, scrapping. Listen, if you have a haunted house, you should call me. Or if you get cursed, or if Caribbean vampires are after you, or whatever. When I hear soucouyant I know how to deal with it-- thanks, Kit Marlowe & Co.-- & I know it is a skin-changer like the loup-garou. The Goodlady makes me think of Carlo Ginzberg & Bensozia & I start getting my game face on & then I remember that it is just a book. "Just" a book, because if you think books aren't spells, you are...wrong.

It took me a long time to "get" what this book was about-- it wasn't until page 137 that my theory was confirmed-- & heck, it took me a long time to figure out what ethnicity the protagonists were. So with that in mind, I suppose spoilers follow? I'm going to stay vague & generally talk more about broader themes & the occasional discreet element-- as I normally do-- but Oyeyemi has a flourish for the post-modern. Which is to say, this isn't a book full of exposition, so talking plainly about things is inherently an act of hindsight. Does that make sense? Like Dark Souls-- yes, I can turn any conversation into a conversation about Dark Souls, apparently-- the story is told in the margins, so to speak. In hints & clues & scattered statements that all together build a picture, but are presented puzzle piece by puzzle piece. The author is a black British woman-- I realize that the ethnic identity of being a Afro-Caribbean Brit is complicated, like hey! The pilot in Code Name Verity, but I don't know a lot about it, so if I stumble in terminology or say something stupid, let me know-- & West Indian mythology & Haiti are referenced in the opening pages, but the Silvers are white people. "White is for witching" is...a statement about how this is a book about a racist haunted house. It is also put me in mind of Saruman of Many Colours: "White!" he sneered. "It serves as a beginning. White cloth may be dyed. The white page can be overwritten; and the white light can be broken."

Oyeyemi's book is about race, but it is never about race, except when the haunted house is speaking. It is about immigration, or the casual use of strange slurs out of context-- like "golliwog" to refer to a brand of cigarette-- or adoption, or class, or any of the other dogwhistle terms you can hear on the news. Only here, rather than being cryptoracist "code," those are more often terms for the blank stupidity of people who act as cogs in the greater machinery of racism. The house-- which seems, from the wreckage of Miranda's dream sequences, to have been blown up in the Blitz & to be a ghost of itself even?-- is the unspoken racism, & ironic racism, unexamined biases & privilege are weapons in the specter's arsenal. You know, & haunted elevators or poison apples or nightmares & hallucinations, possession, mesmerism, whatever evil Alice in Wonderland stuff it can scrape together & use to terrify. & it works, enough for me to feel it as I read the book, to want to yell at Eliot for failing to be the dark knight (the witch's champion!) he knows he's supposed to be. There is other magic afoot in the world-- the tower of guns, voodoo & dark gods in feathers in Haiti could be just a dream, but I don't think so-- & their housekeeper Sade sets her magic against the house but really all she can do is delay, aid, assist.

What happens at the end of the book? Well, finishing, I wrapped back around & read the first few pages & I still don't have a cogent thesis. I'm going to start rambling-- more than usual, I mean-- here, as I try to sort out my thoughts. It isn't all out there in the open, though I am willing to believe all the answers are here, hidden in plain sight, in nooks & crannies, under lock & key. Reminds me of Gene Wolfe, that way. First, can Miranda defeat the Goodlady, the haunted house? I don't think she can, not on her own. Eliot...I don't think Eliot is useless but like Sade, I think he can only offer so much, & from the apple pie at the end I wonder if he isn't entirely compromised. No, it is up to Ore I think, Ore who uses necromancy to blind the ghosts to pass among them, she cracks open the skin of the soucouyant, who could be the vampire slayer but chooses...mercy? Or is weak? Or whose story isn't finished, yet. Ore, who is from Kent, like me, & studied "arch & anth" like me. Ore, who holds the hand of the one she loves & trusts that she won't let her crash when she has her eyes closed, as I trusted my love Jennifer, who led me into a pole when we first started dating... Miranda is in the house. Is she dead? Who do you believe?

The meeting itself was pretty heavily attended! Liz was first, followed by Rasheem,

fordmadoxfraud-- in the flesh!--, Terra-- via the Matrix-- & last but not least, Beatrice. You can tell by the proportion of Livejournal users that it was a group of hoopy froods who really know where their towels are. We had a pretty rousing discussion about the book-- generally very well liked, though the consensus was that it was mostly a meandering tale rather than a tightly crafted one-- Carmen's review called it "ping-pong-y"-- backed up fairly conclusively by author statements. I compared her to Gene Wolfe-- because I think second readings will be rewarded, as Kerry said in her review-- but David pointed out that it was more impressionistic, which led me to conclude it is Lynchian; like Twin Peaks it holds tight to its internal logic, but that "logic" is dream logic. Other people thought that it was less a "racist haunted house" & just hated outsiders, but I still disagree. Wanted to put down their thoughts for posterity though! We also had a book exchange! Lilly got my pick, We3-- which I chose because, well, I'm into cheap shots-- & I got Carmen's pick, As God Commands. 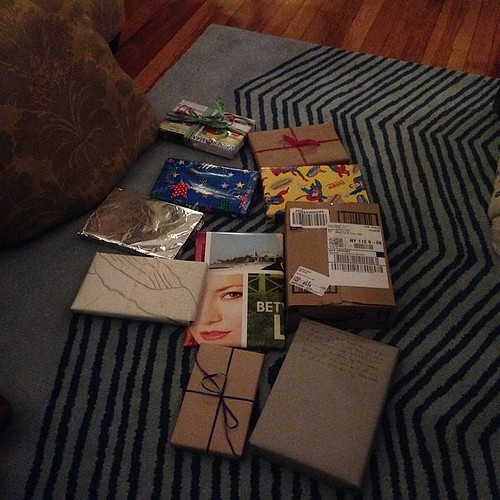 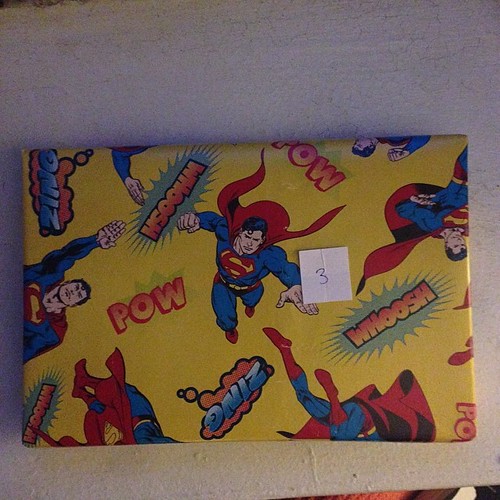 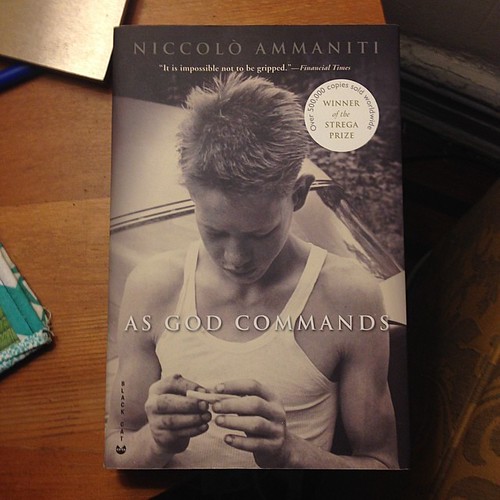