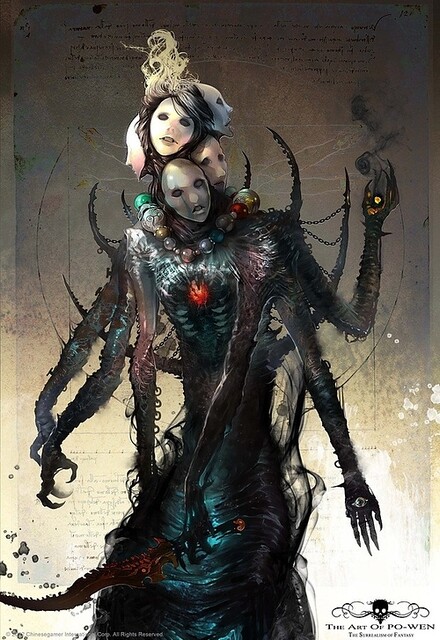 Finally-- first time this year, actually-- I got my Oubliette campaign going again! Well, Silissa took some credit for the delay, with her pottery class! Fair enough. First to arrive was

fatbutts & Luke, the Kitsune nobles, Amina o-Kistune the diabolical bushi & Haru o-Kitsune the scheming kage. Luke & I have been talking about his Occult paradigm, & so he bought the "ley lines" specialty for it to make things official. Eric & Silissa & non-player baby Indigo were next up; Ren Jokoizumi the taikomochi survivor & Moe no-Cho the zaibatsu herbalist, who brought her Perception skill up to OOO. Nicole was last-- she was at a book club but was able to make it after all-- so Keku no-Kin showed up as well. Actually, it took me too long to round them all up in the same place; maybe next time in the same situation I'll just have the curtain come up with all of them already reunited rather than trying to railroad the group into a reunion. We recapped last session & then got into it. 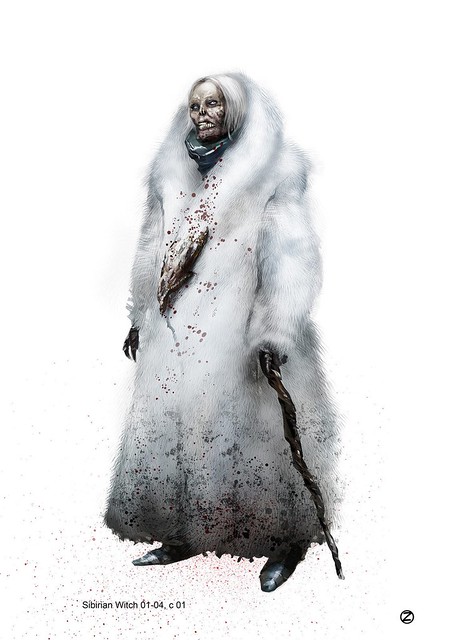 (Osamu of the cult of Yama; Hansel & Gretel concept art by Ulrich Zeidler.)

We started with Haru using his new specialty to bust out a dowsing rod & examine the Pyramid of the Royal Physician. Besides seeing that it seemed that the Pyramid was siphoning cosmic energy from the sky & channeling it into the desert to create the oasis, it also seemed that of the four greater dragonlines leading out of the Pyramid, only two were still extant: one passing through the Arboretum & the other passing through the skull-faced pagoda that the players had steered clear of until now. Now, they head there, where Ren took Mollie's old-character, now-NPC, when she fell into a coma. They walk through the giant wooden skull whose teeth serve as a door to the first floor of the shrine, & are greeted by Osamu, an ancient crone of a woman. She tells them this is the shrine of the death cult, worshipping Yama in his guise as Yama-of-Many-Faces, but that their order is fading, dwindled to only Osamu, her equally aged companion Nana, & the young orphan Morikun. Amina is interested in joining the order-- the worship of the death kami Yama would fit along side her reverence for Mao, the oni god & judge of the dead-- as are a few others, but they put a pin in it for now. Into the pyramid, under a massive stone deadfall trap, warning them to be wary of other traps. As old as they are, the women can't tell them what lies within; no one from their order has entered in generations...another reason they want to re-vitalize their order. 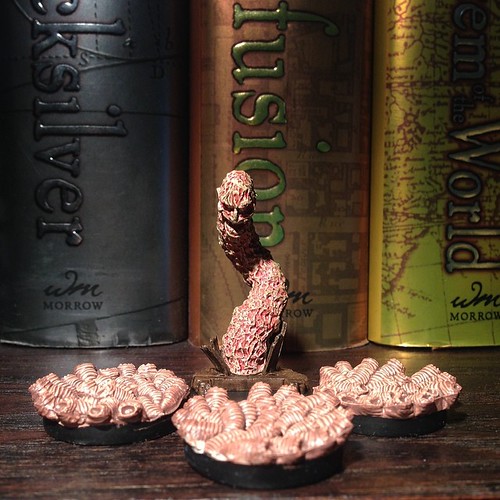 (Scarab larvae & the face in the larvae; photo by me.)

Dungeon time! This is me as a Dungeon Master: either I want to have a session where the conflict is all character driven & social interaction, or I want to lock you all in an old school tomb. Just how I do. The party needs torches, but Ren is ready; his character is adept at scavenging, always stashing or pocketing useful items, & generally a useful packrat. Entering there is a passageway slanting up, & a passageway slanting down. The players decide up is the way to go, along the hieroglyphs & faded paint of the wall, along the...shiny metal bar running along both sides of the wall. I think you know where this is going...Zzzzap! After some shenanigans, they pry the bar out of the wall, breaking the "circuit" so to speak, though Keku noticed it flickers with black lightning back behind them, in the tunnel going down. Everyone is fairly beaten up, from pterodactyls & lightning traps & sand golems. They find a secret door, leading into a wide chamber, decorated with images of keys & feathers, with a dais at the end. As they enter, grubs & scarabs pour down the wall sconces, starting to fill the chamber. The party uses fire to pin them in-- they noticed the chutes leading in & assumed stuff would come down them-- so despite some back & forth, they make it to the other end, even as the maggoty creatures form a column & a face. On the raised altar, there is a golden scarab necklace, which Keku grabs & they run out of the chamber even as another deadfall starts coming down, sealing the room behind them. At least, I'm pretty sure the door slammed shut on them; it was pretty dang late & I had drank more sake than I meant to! 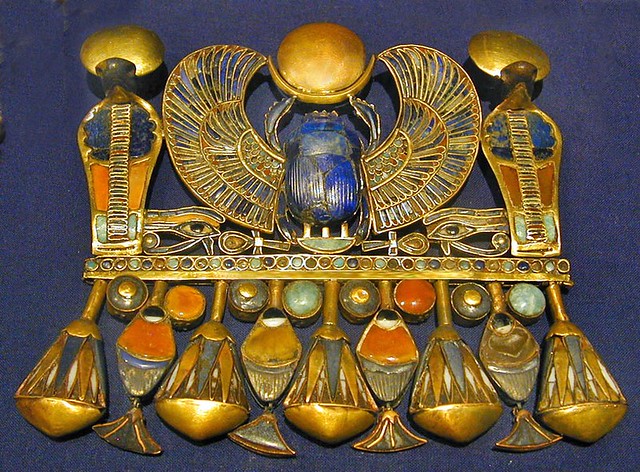 (The Scarab Amulet of the Royal Physician; Pectoral with the Throne Name of Tutankhamun.)
Collapse