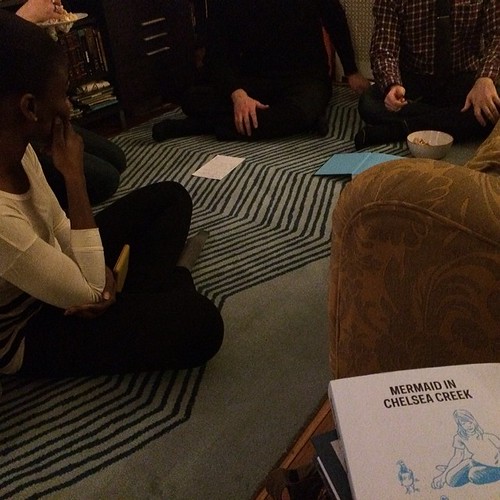 It was the Eleven-Books Club meeting for

fatbutts's pick, The Mermaid of Chelsea Creek. Opinions were not really split, except for Lilly, who liked it despite the problems other people had with it. A few issues of note: one,

fordmadoxfraud was in from San Francisco for this meeting. It was very well attended; actually, I think we had everyone, sans May. Terra beamed in from China via Facetime. A real quick side-note; we have the Chromecast, & while I really thought it would help make video conferencing easier, it hasn't. Facetime & Chromecast not working I can at least understand; as was pointed out to me last night, Apple & Google aren't the best of friends. The fact that Google Hangouts & Google Chromecast are non-compatible, even with plug-ins to sort of make it work, just makes me crazy. All I want to do is make people's faces be on the television, with their words coming out of the speakers. It seems like it shouldn't be this hard. It has become a running gag: watch Mordicai fumble with computers & A/V wires for an hour at the beginning of every book club! It is worth it, obviously; having our friends able to be on a Star Trek video screen is a perk of living in the future. I just wish we were a little bit further along into the future. Jenny baked homemade pretzels, macaroni & cheese & rice crispy treats (she took the photo above as well)...& of course since she did, this is the meeting everyone brought food too. Pretzels, so many pretzels! Probably because salt plays a big role in the book.

Consensus on Mermaid... was basically "why the heck is this a trilogy?" with a dash of "this book needs an editor." Liz & I especially on that latter bit, per the LA Times review discussing how neither she nor her editor had YA experience. The book retreads scenes, even freezes the action, & does a lot of telling rather than showing. The book should have been a stand-alone, or failing that, the first book could have had an arc? Liz's theory is "three book deal," which...is probably true. The rest of the consensus view was that she does well with "real world" stuff-- her relationship with her mother, her best friend-- but that the deeper you go into the supernatural, the further that dissipates. I forget who it was-- book clubs are for wine!-- but someone said that the Polish mythology felt more like she had Wikipedia open in a tab, less "lived in," & I think it was Beatrice who said that everything magical comes to her without effort or training. Using magic powers as a metaphor for emotional catharsis is one thing, which you could argue she's doing, but I tend to agree, though for me the "martyrdom by Care Bear Stare" thing isn't too appealing. It was a fun meeting; we broke up early because I thought we'd lost Terra-- she was feeding Mal-- while Liz had a second party to go to (as is her wont) &

littlewashu was off to a concert. I don't know if it actually was short; felt like it. One of those books where we all agree & thus run out of steam.
Collapse