Wait, this is the first part of a trilogy? That isn't okay. This is

fatbutts' selection for Eleven-Books Club. It didn't need to be a trilogy of books. Looking back on it, on how there was an establishing scene X, then scenes Y & Z on the same subject? You could have cut out all of that. Or how about showing instead of telling? We hear lots of characters talk about how bad Kishka is, but it isn't until the last few pages that she starts acting that way, after staying off stage for so long. I don't know, I'm not normally bothered by things being extended into a trilogy, but for some reason it is bothering me. I think because it really is the difference between m liking this book & me being okay with this book. I like trilogies, I don't even mind reading the first book as part of book club; that is what happened with Seraphina & This Dark Endeavor. It just bugs me I think because it is the difference between this book being fine & this book being good. Dragging its feet like this, it is sort of in the range of mediocre Gaiman. You know me; I like Neil Gaiman & I think some of his work is amazing, but I also think a lot of his novels are the pits. As

onatopofthings said when he gave me a bunch of Arby's sauce, Gaiman's problem comes when he has to write more than two hundred pages. Ha, ha. True though. Anyhow Michelle Tea has the opposite problem. Ramblings. We didn't need the umpteenth scene with the pigeons, or the Dola bit where she just refuses to progress the plot of the story, or the...well, basically there is a system like this. Show Checkov's Gun. Come back later & go "golly, that sure is a big gun!" Then after that, return to the scene to make sure it is loaded. Then in a little while maybe show the gun again, talk about how loud of a bang it makes. Maybe one more scene with the gun, just in the background ominous. Firing the gun? Nah, save it for book two or three! See?

It also reminds me of Half World. Or oh, the WondLa books. I guess these are the new urban fantasy sorts? The mix of fairytale stories & trailer park woes. I wonder about that flip, from posh Narnia to poverty. I suppose that is the gritty "realism" of the modern, in the truer sense of "modern." I don't know, I don't mean to sound dismissive at all! Poor teenagers exist a-plenty, writing for their experience is fine by me. I think that is Tea's strength, actually; writing to evoke truth in the little things. The dirty river? I grew up by the Cuyahoga River, & in college that river was my hang out spot; there was an island on it I marked out for mine, & the train I took to Metropolis ran along side it. Superfun cleaned up the river that caught on fire, but I think I still have a decent claim to fame for knowing about dirty rivers. Michelle Tea's is in her writing; she "gets" it. When she writes about teenage girls acting bad for attention, I wrote a note to my self saying "what Klausner thought she was writing." I actually really like her worldbuilding; her use of historical elements to blend a witchy whole. I just wish she'd get on with it, repeat herself less, require less heavy-handed exposition scenes. & I wonder if she's got something more clever in store for the end than just a big Care Bear Stare. Or if she does just hug it out, if it will be a martyrdom, Hrm, another reason to be bugged that this was a trilogy, not a stand alone. No closure; cliff-hangers work best when it can compel me to get the next episode, but here it just left me disconnected.

Oh, & a thing? Just a musing. People described this book as "radical." I don't...see how? So far it has been a "magical European lineage of magic!" story, with a dose of "helpful brown supporting character who tells the main white character that she's the reincarnated brown messiah." Which isn't really what it is, it isn't Harry Potter Dances With Wolves, it is just a diverse cast, with their own mythopoeias. Mythopoeodes? So far queerness has been used as a slur (by dumb characters, not authorially, obviously) & as a thought experiment about androgynous people, as others, but not really been present. Which, hey, having a poor straight female protagonist in a mixed community who is Polish is cool, I'm not casting shade, I don't mean to. It just...there are no real issues of race, gender, sexuality, class or anything discussed or really central to the book. Which is fine; it is a YA supernatural story, it doesn't have to be a forced metaphor for Marxism or something horrid. I just wonder why it is being called radical. I mostly mention it because I'm going to bring it up at book club & want to sort of figure out what my thoughts are about it. Not to sound hyper critical, which re-reading it I think it does. Over analyzed about stuff that I would normally have given a pass. It is a book about girls & quests & magic. That is awesome & I like that. Ultimately I was let down that it was a trilogy, & not complete, but there is a decent chance I'll follow up on it, especially if Jenny gets it from the library or the Superhero Supply Co. store & then I can just pick that up. How is that for an unbiased assessment? 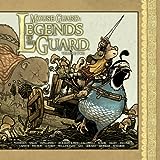 Crown of insect scales,
almost my favorite, but then:
the ghost of an owl!

Another Mouse Guard anthology to enjoy. My feelings on the Guard are pretty clear: super awesome. The Black Axe was one of my favorite books last year. My favorite is Jemma Salume's ghost story, though to be fair, if you had asked me to guess who I would like best, I would have guessed Salume. Oh, speaking of, random note; since this is an anthology, I wasn't going to count it for or against my plan for reading half women writers, but with Salume as the only woman, I'm counting it as a boy's club pick. Eric Canete * Cory Godbey, & like them a lot as well, & that is reflected in their stories. There is a lot of great stuff here; I think I liked the first Legends of the Guard better but I enjoyed this plenty. Not as good as the "real thing," but it has other virtues like, Stan Sakai! & knowing a little about his real world situation makes me wonder about what other personal touches & easter eggs might be in the frame story...
Collapse