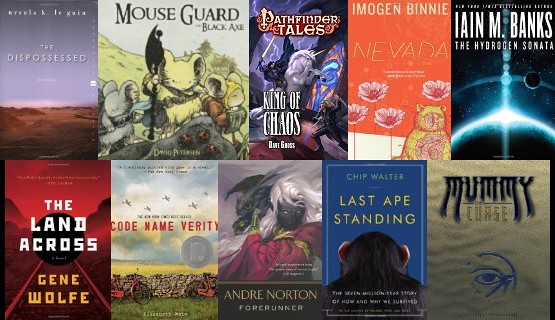 I've done Best Of lists for a few years now; sorry this one is so late! Last year was a bad year for me keeping track of the books I read; general malaise paired with getting paid to write for Tor.com-- especially the Advanced Readings in D&D project-- cut into it, especially the more casual "I read this, here are a few off the cuff remarks" sort of thing I would do for books I was more or less lukewarm about. I'll try not to fall into the same trap this year. I won't make a resolution of it, because I took a page from

littlewashu-- as well as Jennifer & Liz & other people who might not have the letter rule but have the spirit of the rule-- & pledged that at least half of the books I read this year will be from women authors. No excuses for "oh, I had to read it for work" or "this is for a blog project," either. I'm planning on padding at least some of the stuff early in the year with Ursula Le Guin's science-fiction stuff. You know how I normally say this list is in no order? Well, that is true again-- mostly the list is arranged by the horizontal size of the cover image, to be honest, since I was making the cute little banner-- with the exception of The Dispossessed, which is just flat out my favorite book from last year. I did a Top Three Books for Tor.com, but those had to be books that were published this year, but all three of those-- The Black Axe, The Land Across & Mummy-- all made it onto here, as well. No honorary mention list this year; I just wasn't feeling it, in all honesty. I had a top ten in a way that in years past I haven't. Certain books are negotiable, maybe something else will stick with me or some other thing will be forgotten. That's the fun of writing things down, though, isn't it? Coming back to it later & seeing it in new light, either vindicated or supplanted?