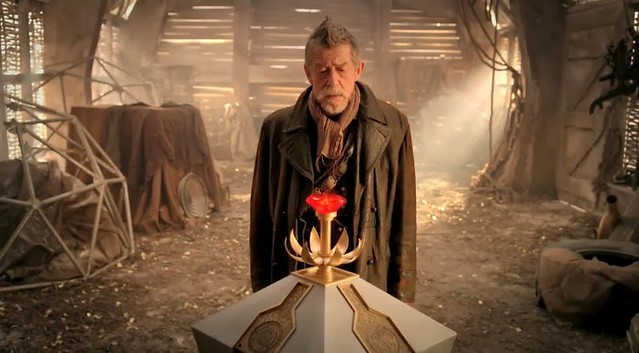 So here is what I think. I think The Moment is what happens when you take a TARDIS & weaponize it, when you strap a de-mat gun to it & effectively create a spacetime machine that is capable of removing things retroactively & proactively from ever having happened. & I think The Moment is Bad Wolf; I'm not all that up to snuff on the Tenth Doctor but I buy that. I was a little bored by the Time War; I imagined planets suddenly conquered by Daleks, then the next day destroyed, then the next day conquered by Time Lords; I imagined whole civilizations never having happened, then re-imagined as aggressive warriors, then an alternate universe version where they are all evil. You know, a war fought with time as a weapon; TARDISes linking to break through fixed moments in time, paradoxes snarling & destroying entire arms of the spiral galaxy, tangles of time where Davros is leading the Daleks, where the Parliment is, where the Daleks have been defeated & the Time Lords are a grinning Nazi menace...you know, reality fraying at the edges. That said, I really appreciate it going full All-Star Superman. I didn't see Man of Steel, & in part the killing of Zod is why. One of Superman's mottos is "there's always a way." Part of the reason you'd have a magical demi-god in your story is because in the real world, there isn't always a way; that is why fiction creates a superbeing. Having Superman vindicate Zod's philosophy by killing him means Superman loses, means the moral of your story is bankrupt. Now, there are people who say that what makes the modern Doctor interesting is that he is a monster, that he made the hard choice, that the hard choice wasn't one bad man dying to save lives, it was many innocents dying to save lives. & I get that. I like that the Doctor was more morally grey. I like Marvel comics as well as DC comics, you know? Pluralism. That said, for the Fiftieth Anniversary, going big is the way to go. This isn't a trite retcon, it is a big retcon, & a fitting capstone to Moffat's era of retcon by timey-wimey shenanigans. In part because it playfully lambasts Moffat's era so much. & because yes, the good guys win. The reboot era has been marked by getting darker; a crack of hope is well earned. I liked Hurt's War Doctor; you think he's going to be some shell-shocked sociopath monster, but instead you get...well, The Doctor. My theory? I wonder if Capaldi's Doctor is...the New Nine. That is, we see Hurt's War Doctor regenerating, & his future & his self have changed...I wonder if there will be shenanigans there? Heck, have Thirteen & Eleven go on adventures together for a bit; do a buddy comedy season? That's what I would pitch, anyhow.
Collapse