The Dispossessed by Ursula Le Guin.

The ansible broke
the best of the post-humans:
The Jupiter Brain.

The Dispossessed is an anarchist screed condemning property & the corruption of pure academics, as well as science-fiction novel about a dual planetary system. It becomes clear pretty quickly that each planet thinks of the other as "the moon." Urras is a rich, green world filled with fractured nations; notably a big patriarchal capitalist one, a big centralized socialist one, & an underdeveloped one where they can fight proxy wars. Anarres is a harsh, desert world...filled with an anarchist collective that has been doing just fine for 150 years, thank you. The Revolution ended when the people of Urras just said "take it, take the stupid moon, just go!" Throughout the novel, the Odonian Brotherhood (it isn't actually called a brotherhood; they made up a new, less sexist language) falters, but the terrible dystopian future it presents is...not terrible & in fact just threatened with banal small injustices that are commonplace in our world. A teacher who doesn't pay enough attention to a promising student. A fellow physicist who might put his name on your work as a co-author or might use people's ignorance to place himself in a false position of authority. Kids being mean. They are symptoms but the hardships on Anarres are mostly environmental.

fordmadoxfraud's pick; I give him a hard time because he usually picks books that I find a slog-- Christie Malry's Own Double-Entry was a hit with the others, but I didn't care for it, & while Novel with Cocaine has it's proponents, I'm not one-- but that is because of the slice of personality he was using; this was his second choice, because the other book he wanted was out of print & unavailable used, but that worked out to my advantage like you wouldn't believe. I have a whole thing for monastic utopias, like Anathem & The Glass Bead Game. This is exactly my jam. It is even boring/interesting in the way I like.

The protagonist, Shevek, is a physicist, working on the Unified Field Theory, or the Grand Unified Theory or...I don't know enough physics to know what, but something like that. (Also, he's furry, they are all furry, if you aren't paying attention you might miss it-- they are human, just you know, humans with a degree of evolutionary drift, in this case, furry.) Anyhow, incredibly minor spoiler, his work is the reason behind the invention of the ansible. Here is a thing about me; I effin' adore the ansible. Faster than light travel, especially instantaneous travel, that doesn't have a lot of appeal to me; I like the weird distortions of time that high speeds creates. I don't want to get around it by deus ex machina (

carmyarmyofme disagrees, she likes warp & such, but she's also on a Trek bender). Faster than light communication is a different matter & instantaneous communication, well, that is the whole kettle of fish, isn't it? The profiteers of Urras "get" that; Shevek thinks he "gets" it but it isn't until he's left Anarres for Urras & is hip deep in capitalism that he really does "get" it. It isn't about science, it is about weapons & domination, of course. Isn't it always? Well, no; that is the answer in The Dispossessed. It isn't always. It doesn't have to be.

You know what I really liked? The love story. Mostly because it was the most romantic. The characters meet, & are like "we must be together, for the good of the community," & like "it is a categorical imperative that we be as one," & like "I believe in absolute freedom, I believe that I am free to be with you forever." That kind of dirty talk will get you everywhere with me. You know what else I liked? The acknowledgement of the existence of children? I'm pretty baby crazy lately, but the kids in this book were super cute. Oh man, little baby anarchists! The part with little kid Shevek & friends playing "Prison" was

fordmadoxfraud's favorite part, I think...or at least, that was when he was all in. Me, I took notes on the problem of non-violence. I didn't find a satisfactory answer in the text. Actually, I take that back, that is bad phrasing. The Odonians are not non-violent; more I guess I mean the problem of "us" & "them" & the problem of asymmetrical force. I don't know if I can get into it here, but I think about "might makes right" a lot. (I think that statement should be followed by "the many are stronger than the few," but then, I'm an old school fascist in the sense of Roman plebian imperialism, of the fasces of Latin. Syndicates & unions & collective power from the bottom up.)

So anyhow, I really liked this book; told alternatingly between Shevek growing up & living on Anarres & his time on Urras. The book club liked it a lot too!

fordmadoxfraud said he picked it because Ursula Le Guin was one of those authors he kept procrastinating on, until Libby pointed out the gender biases in SF "best of" lists. Me, I was steering clear of Le Guin because I assumed once I read her, I'd have to read all of her. That seems to be true; I want to read all her science-fiction books pronto, at least. I will hold off on letting Earthsea consume my life. I should have taken better notes. I mentioned Sapir–Whorf & got blank looks but Liz constructively translated it into english, into neurolinguistic programming & such. Oh I should talk about that very briefly; let me give some kind of club role call. First up,

fatbutts was first. She bought toilet paper & showed up early. Beatrice was next! She's normally last but she course corrected & got here on the early side this time. Jennifer was in Vegas, so she was out, but

carmyarmyofme was next, & the Liz, & I think that is it? Still, pretty well attended, given that

littlewashu & May were out, too. I am terrible with this sort of thing, plus I took a dose of nyQuil before things started, so I think those details are more or less right. Anyhow, we-- mostly me & Liz but others had their say-- had a row over the statement "Sabul stole from Shevek" & after calling each other profiteers & egoists, we settled on "Sabul stole." Afterward we played Cards Against Humanity & Ahmed joined us. The big winner was Lilly with "For my next trick, I will pull _______ out of _______," to which she answered "Just the tip" & "Skeletor." 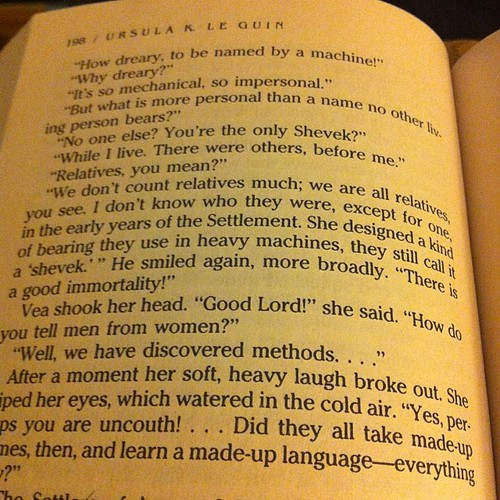