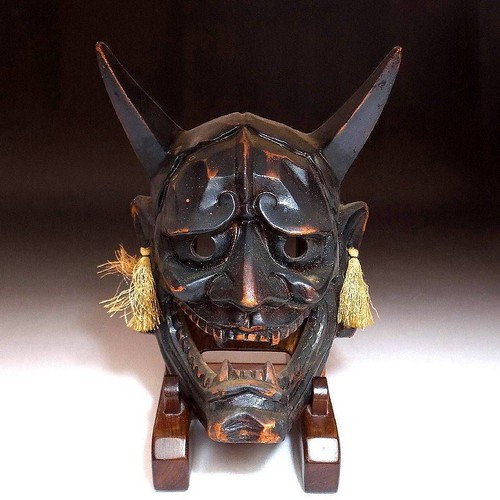 My players literally did zero things on my checklist. So, that's a thing; I make checklists to organize adventures. I make checklists to organize everything so that is hardly a surprise. Rather than a flowchart, I just write down possible vignettes, whether they are a room in a dungeon, an NPC to talk to, a fortean event, whatever. They don't all happen, but that is fine; if the idea is good enough I can just recycle it another day, or heck, don't underestimate players, they might suddenly backtrack & hey, you do have some events for that out of the blue left turn. So okay, my players got through the two prequel checkboxes, the pre-session boxes: ▢ XP & ▢ Recap. We did get those figured out! Last session had been a little confusing-- there was hallucinations, the supernatural, & a lot of running away from a terrordacyl-- so going over that again was worthwhile, especially since things ended with: Eric's character the criminal turned entertainer Ren Joko Izumi feeding a bright golden pill to Silissa's herbalist for the Cho Zaibatsu, Kemushi Moe no-Cho; Mollie's warrior monk freaking out & in a swords & naginata drawn showdown with Amina o-Kitsune, the Kitsune samurai played by

fatbutts & Haru o-Kitsune, Luke's Kitsune aristocrat; & meanwhile, Nicole's character, the Kin Zaibatsu cyborg Mukade Keku Kin, had left the scene entirely. They are in the second story of a tower, full of guano & a dead body, in a ancient arboretum full of Triassic flora & fauna, in an oasis that they came to for an auction. The NPC Iroha o-Lung was downstairs-- her attitude is openly, "if you kill each other off, that's less bidders, so I'm not getting involved"-- with Moe's sidekick, the researcher Gale. See, I told you it was confusing; this is why minis are important! Sure, it is a game of imagination & you don't need them, but they are tools that make everything less confusing.

I think my thesis is, for every player over three, you can prepare one less Act. Seriously, I'm sure you've played in a two or three player game; you just deal with the dungeon. Remember in Stories of Our Youth when it would be the Thieves Three & we'd just grind the heck out of the Temple of Elemental Evil? Every other player adds a dimension of randomness & complexity & of character agenda & of backstory &...well, it grows exponentially. At low numbers, no big deal, but at six players my group is about as big as I'd ever want to run for. That said, I really like character-driven games rather than plot-driven games, so I am in no way complaining...because hey, now all my game preparations for next session are ready! & the insanity that the players brought to the table was a lot of fun. I realized you could kind of think of them in terms of DnD archetypes. Haru is the magic-user. Moe is the cleric. Keku is a thief. Ren is a bard, Amina is a paladin, Mio is a monk, it all fits. Oh & before I forget; the music was Fantômas- "Delìrium Còrdia," & like last time, it creepily lined up with events; from the rising wind to rising tensions, the music kept pace quite uncannily. Last used in the very fun Soaring Gallows session of a previous campaign.

So what went down in game? It is a tall tale to tell. We'd left a hallucinating Mio with her naginata pointed at her lord & master, Haru, because she'd "seen" Haru murder Moe, she "knew" he had. Amina, Haru's cousin by dint of their shared noble family, had her katana under Mio's chin & her wakizashi at Mio's snarling wolf. Escalating matters, Haru had blown a puff of...well, itching powder in her face. It was a delicate business but it was slowly being unraveled...though when Moe got up & Mio "saw" the snakes writhing in & out of her empty eye sockets, her mouth, the cracks in her skull (Mio had been poisoned by Moe's blood, a "gift" from a naga), that presented a bit of a challenge. Moe, for her part, had been...well, hurt very, very badly. Coma badly. Humpty dumpty badly, as the terrordactyl dropped a river stone on her head. The golden pill Ren had found in the nest & forced down her throat had seemed to dramatically heal her-- not entirely, but an incredible amount-- but it had also trigged paranoid flashbacks in Moe, bringing up repressed memories of her being brainwashed & tortured by her Zaibatsu. & it had showed her...something.

It was a bit Keystone Cops from there, until the stakes got real. Up & down the stairs of the tower, peeking out to see if the terrordactyle was still there, calming down Mio with antivenom, watching orange sand start whipping in the windows of the Arboretum. Keku, who had left, came back to warn of the funnel clouds starting to form out in the desert, but she (quite understandably) stayed near the door to the antechamber, using her cybernetic throat to shout like a megaphone to the rest of the party. Haru & Ren, eager to get the rest of the loot from the terrordactyl nest, go back up stairs...but first they grab Moe's pet white cat, who Moe has just gotten finished establishing has special pheremone glands. They take the cat up... to where the terrordactyl is lying in wait. Ambush! The terrordactyl savages Haru's shoulder, slamming him against the wall, & & as Haru goes to throw the cat, it strike back, clawing his face as well. Amina grabs him. "What are we even doing here?" she says, & the group finally pulls together, going down to the first floor-- Iroha has left, heeding Keku's warning-- grab the erstwhile & cowering research assistant Gale, & get ready to make a break for the antechamber to the arboretum. Except...now a second terrordactyl has joined the fray. Things look grim-- "can he fit in the door?" "you aren't sure."-- but then Moe looks at them with golden eyes, hypnotizing them. Moe knows hypnosis; not mind control, not Dominate, "real world" hypnotism, like Derren Brown, but just like that, the terrordactyls loose a "AAUuuuaaarRRRrrrgggGG!" cry & fly off.

So, finally, after all that, the party retreated to the antechamber of the Arboretum. Though previously positively swarming with ferrets, it is empty now, & outside through the thin orange light is a swirling maelstrom of fine orange sand. More like dust; not sharp but fine, but dense. Amina marches right out into the sand-- it certainly is a sandstorm, but they aren't in the middle of one of the tornado-like epicenters-- but the others drag her back in. Here, there is a moment of emotional breakdown. Ren slaps Gale, angry because Gale ran away rather than help protect Moe, & Moe got hurt-- & Gale snaps back, saying something along the lines of "ignorant street trash, do you have any idea how much money I've invested in her?" & then clearly realizes he's slipped. The party realizes something is happening, so they jump on him. I mean, they really do; Keku has her serpent, the blasphemously named Nagini, wrap around his arms, his wrist, flicking tongue & fangs menacing. Haru puts on her serious face; if you want to know one thing Haru is good at, it is yelling at servants. Amina, dressed in a leering oni mask, approaches him, & Gale starts losing it.

At this point, Lilly is menacing me, & I'm shouting fearfully-- we roleplay hardcore-- & we terrify a guy walking a dog outside. He wasn't as terrified as the players were, because Gale's next move...is to crack his poison-filled tooth, & start convulsing. Remember the tooth! (Jenny comes home around this point, & references my delusions when I had a concussion from getting my skull cracked open-- skulls cracked, that also happened this game-- when I said I'd swallowed my cyanide capsule. I guess I have a "Thing.") Haru is having none of it. Getting an exceptional success on his Occult roll, Haru "remembers" that oni can be threatened with soy beans-- pelt them! Oni wa soto! Fuku wa uchi!-- or can be bought through ceremonial gift giving, like coins or sake. While Amina is still in her cult ecstasy, her face the mask of Mao, the demon king of the underworld, having drank the blue-black gunk of a terrordactyl egg as a sacrifice to her patron kami, Haru slips her three of his oldest mon, a few pennies, & says, "I heard that the oni can ask questions of the dead before they are judged by Mao-- perhaps you can question Gale's corpse? One success on Lilly's roll means one question; one question can be asked.

"aaaaAAAHhahahAH ha ha HA! Ask me about your son! HA ha ha AHAhA! Ask me about your son, anything but her!" but no, Amina, ridden by the kami, an oni, says "tell me about Moe." "Ha ha ha she's not even real, there's no such person as Moe! SHE'S NOT EVEN REAL!" & begins to rot...in slow motion, but not that slow. Like fruit on a hot summer day. Too quick. Moe is now convinced she's a clone... & she wants the clone technology for herself. Amina, the mask falling for her face, has her jaw drop, as Lilly's does, as Lilly remembered that she had a lost child in her past...& so Lilly reveals a little of her backstory, that she ran away & joined a dark circus. She was a rebellious noble child, & she bargained with her parents that if they would let her go to school at one of the Geiko artisan schools, she would come home & be a dutiful wife & marry for the good of the clan. Instead, the Geiko that she left with were worshippers of Mao, a spooky traveling carnival. While she was there, she had a son-- with a birthmark the shape of the Toxic Jungle-- & gave him up to the circus to be raised among them. They decide to rest, because they are all beat up: Moe has an aggravated wound, Haru has two lethal & a bashing, Amina has three lethal, but the rest are pretty rattled.

& then there is a powerful "SLAM!" at the door.
Collapse