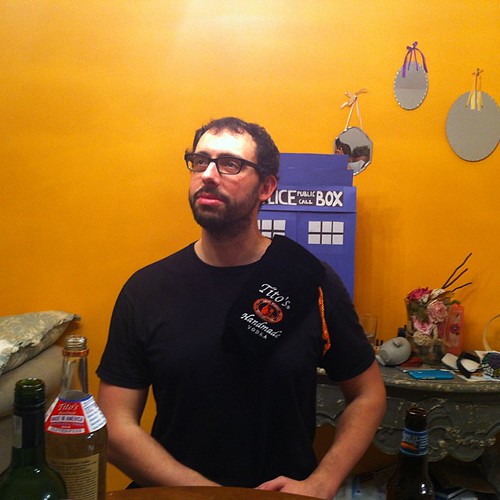 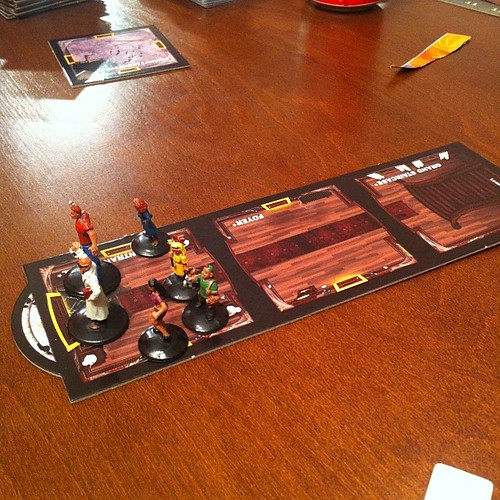 I am the True American! So, here is the deal: New Girl is in fact a wonderful show, & I realized I'm totally a Zoeey Deschanel-- you know the spiel, "if you replace twee sweaters with wearing black all the time & playing the ukelele with playing Dungeons & Dragons..."-- & there is a rare but magical reoccurring drinking game called True American, which is basically a cross between Calvinball & shouting about a version of American history distorted by pop culture. You have to drink your way through the obstacle course & then be the first to swig from Tito's American 100% corn mash vodka, which CNN calls "Smooth, I mean really smooth!". It was pretty gross, & then afterward we played Betrayal at House on the Hill. Or tried too; um, it turns out after True American everyone is a little bit too do...anything really. So that was Friday night; then Thursday was Halloween which was a work party & then I meant to run my Oubliette campaign but I was a little bit in my cups then too, so we ended up playing dress-up & watching Spirited Away. Um, Wednesday! Oh I went to go see Ender's Game Wednesday night with Liz; there are some smart choices made, but there are also some confusing transitions & like all those Summit films it is a little crowded. I liked it but then, I liked The Golden Compass too, as a visual appendix, so make of that what you will. That pretty much catches us up, since I was up to date last Tuesday. Okay then. Now we're watching Reign, & it is as I thought, too Gossip Girl for me to really care about. Oh & sexy Nostradamus, who makes...date rape drugs? Anyhow I should cut my hair & go to the gym today; that is about the scale of my ambitions at the moment. Oh, & I got an email telling me that my Tumblr is two years old. I'll leave you with Ellen going Full Hulk at True American; click through to the Vine & unmute it; it is worth it.