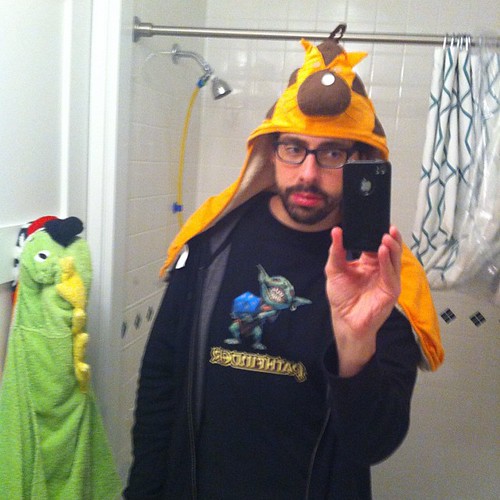 Let me see if I can't prevent a big torrent of "oh gosh I haven't been keeping up!" by actually trying to keep up a little bit. Yesterday was Monday; I went to work & got a bunch of annoying stuff done, but still have a lot graves to dig up this week. I was saying to Jennifer that one project she was working on sounded exactly like a project I am starting on, so that is "fun." Had lunch with Nicole, Silissa & Kate (the gif below) & then came home. I was sort of despairing of the world, so I decided to just stay in. Jennifer had plans but said she was coming home early...so when I woke up on the couch again having fallen asleep waiting on her, I was bummed. Anyhow, let's skip back farther, let me retrace my steps. Sunday was Sleepy Hollow; we went up with

fatbutts & James & met up with

ranai & Dennis in the graveyard. Dinner with Kira & Nino followed, & I took a silly selfie in Olivia's "Halloween Pig" bathrobe. I've since been informed that "there is no such thing as a Halloween Pig." Saturday was us babysitting Olivia. She wanted to spend a while sitting next to me while I showed her my Dungeons & Dragons miniatures, which was pretty freaking cute. "This were-rat is terrific!" Also threw her around in a TARDIS blanket I got a Gothamist Trivia Night. Oh & I took her over to Chris & Autumn's apartment to see them & their dog Murphy. Otherwise, I don't know. Oh, Jennifer & I watched some baseball with Kat & Matt on Thursday; Jenny met up with us after Jocelyn & Brian left. Besides that, uh...we watched Dracula, which is a pretty weird show. It is basically "Dracula, like the novel Dracula, only he is Nikola Tesla." Which actually, I am a big fan of. It comes from Ravenloft, which means Hammer & Universal, but I totally think that Dracula has a mad scientist laboratory in his dungeon, Dracula totally makes a flesh golem & casts awareness on it, right? Also Nonso Anozie plays Renfield? The story is basically...Dracula is a class hero who wants to destroy capitalism by creating free wireless electricity & wiping out the petroleum-based pocketbooks of the plutocrats. Oh, Daniel Knauf is showrunner! Oh suddenly it makes a lot more sense.