The Bell Jar by Sylvia Plath.

Like an Eels album,
electroshock therapy.
(It's still a real thing!)

littlewashu's pick for Eleven-Books Club; that means she's got a batting average of .333, right? Because of her other two books I sure liked her pick The Yiddish Policemen's Union, & I didn't really like The Big Year Journey to the Center of the Earth. I hope you've read between the lines enough to realize that yes, that means that I didn't like The Bell Jar. To be fair, I don't really like this genre, I don't really like "drama"-- that includes psychodrama. I don't like Academy Award bait movies, I don't like feel-bad indie movies actors make to keep their "cred," I generally feel like the tricks & tools used by the writers of drama are sloppy sledgehammers; the "sadness" equivalent of a Farrelly brothers fart joke. So that is my baggage going into it; on the place side, I had this impression that it was a feminist novel, so I hoped I could find a paradigm of appreciation on that front. I guess I must have formed that impression out of the weird reality of the patriarchy, where any book about women gets shoved under one heads, Women's Studies. Esther Greenwood is not going mad because her choices are constrained by being a woman. She's no Cersei Lannister from A Song of Ice & Fire. Oh I mean, there is inequality in the book, & pressure to marry, but there are also risque girls who break that mold, female doctors, successful female writers-- no, the eponymous "bell jar" isn't the glass ceiling.

No, Esther's problem isn't womanhood...it's adulthood. For at least the first half of this novel, I utterly despised her. She's really frequently racist, & is exactly the kind of lucky privileged kid who gets everything handed to them on a platter, & then squanders it & complains that life isn't fair. Oh no, tell us again how awful it is to live in New York for free & get editorial experience before your scholarship, what a real nightmare. As a lazy gifted kid who misspent his potential it is hard for me to feel bad for...a lazy kid wasting her potential. I mean, I managed to end up living in New York working in publishing, & she gets is served up to her on a silver platter? Yeah, forgive me if I don't cut her a lot of slack that to actually try would be hard, & that indecision means opportunities pass you by. The story is filled by would-be men-- the would-be husband, the would-be rapist-- & punctuated by Esther taking every opportunity to be mean to those who are her friends. So no, Esther, I don't like her. Roman à clef or no, I can't pretend I could even stand her.

Of course then she pivots to actual depression & insanity, & that is a different matter. The second half of the book is an asylum tale, which is its own little subgenre, isn't it? Institutionalized stories are big now; has anyone explicitly tied Orange is the New Black into Sylvia Plath? I'm guessing yes. So what happens at the end? I can tell you what I think, if you want to know. Esther breezes through her interview, is released, lives her life for a few years, has an episode, doesn't quite succeed at trying to kill herself, & ends up back at the private institution. Lather, rinse, repeat. Part of the issue is, well, the past. Not that today is incredibly better, but psychology is one of the areas of medicine being advanced at a rapid pace. Today is better than yesterday, tomorrow will be better than today, & there are all too many people & institutions that are still living in the past. For me, the thing is...I don't like Esther, even divorced from the cycle of the grip of her depression. 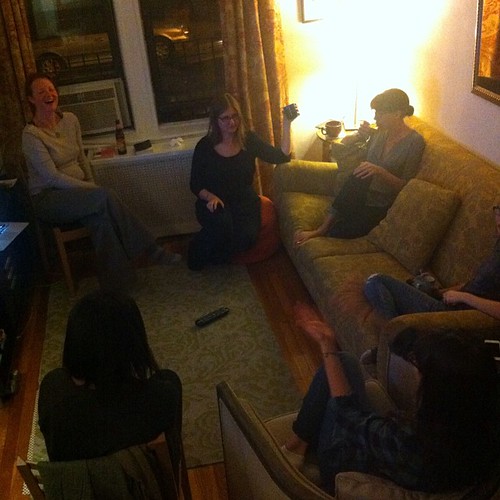 So I read this book just this week; most of the book club folks did too, in many cases having read it just the day of the meeting. Liz arrived first, since she's new, but it actually was a pretty clean attendance! Liz, then

carmyarmyofme, then piped in Terra &

fordmadoxfraud in from California & China, then

littlewashu & then finally Beatrice. People didn't fully agree with my point about the book not really being feminist, but then-- uh, putting myself in a position of questioning feminist credentials is a losing opposition! & I wasn't articulating what I meant all that well, either. In general people really liked the language, & those of us who'd had struggled with depression recognized it as a pretty stressful rendition; that is, it was so spot on it was anxiety causing. Anyhow, we stayed on topic for a good long while, & then sort of drifted into weird youtube videos. Plus, we were congratulating ourselves on being such a stable club; we're been doing this for a little while, huh?
Collapse